Re-sealed the cam cover. A bit nerve racking and had to re-do it once because I put down too much sealant. Ended up using a scotch brite pad and brake cleaner to clean the mating surfaces--worked really well. All new hardware torqued to 8nm + 90. New PCV valve from FCP. USP Motorsports aluminum upper timing cover. New alternator & water pump. Replaced the o-ring on the coolant pipe going into the water pump. Installed 034 SAI delete kit, CCTA coolant flange & 6 speed heater core hoses. Replaced the o-ring on the crankshaft position sensor and a new gasket on the lower crankcase vent. Freshly painted block with Eastwood engine paint, cam cover was painted using VHT wrinkle-plus. Came out OK, I definitely could've done better if I was a little more patient with the heat gun. Freshly painted vacuum pump & throttle body. New HPFP refresh kit from FCP. Was going to pull the manifold to clean the valves but they look OK so I am going to skip for now. Forge silicone coolant hoses & Spulen coolant distribution hoses to replace the factory plastic pipes. 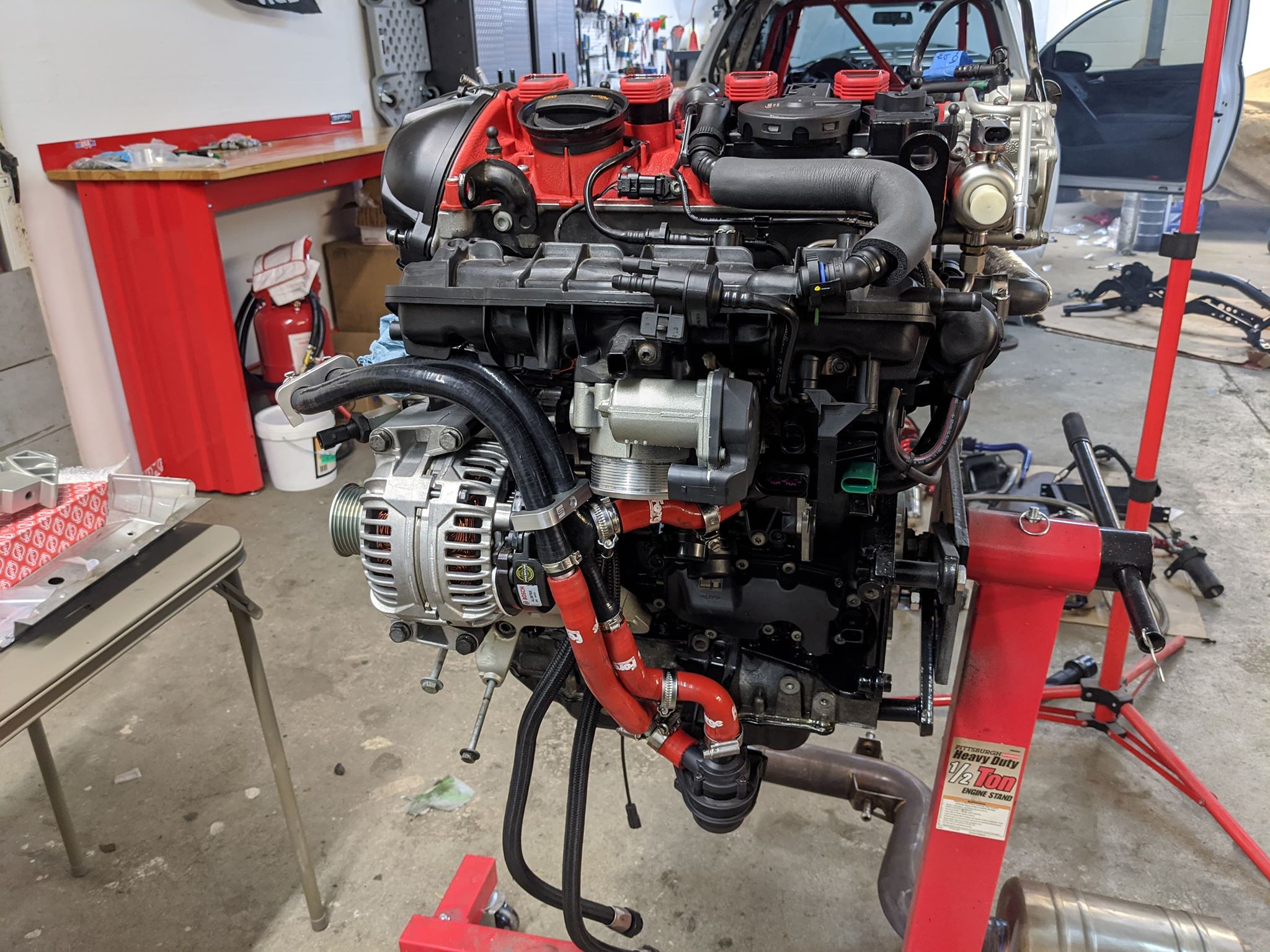 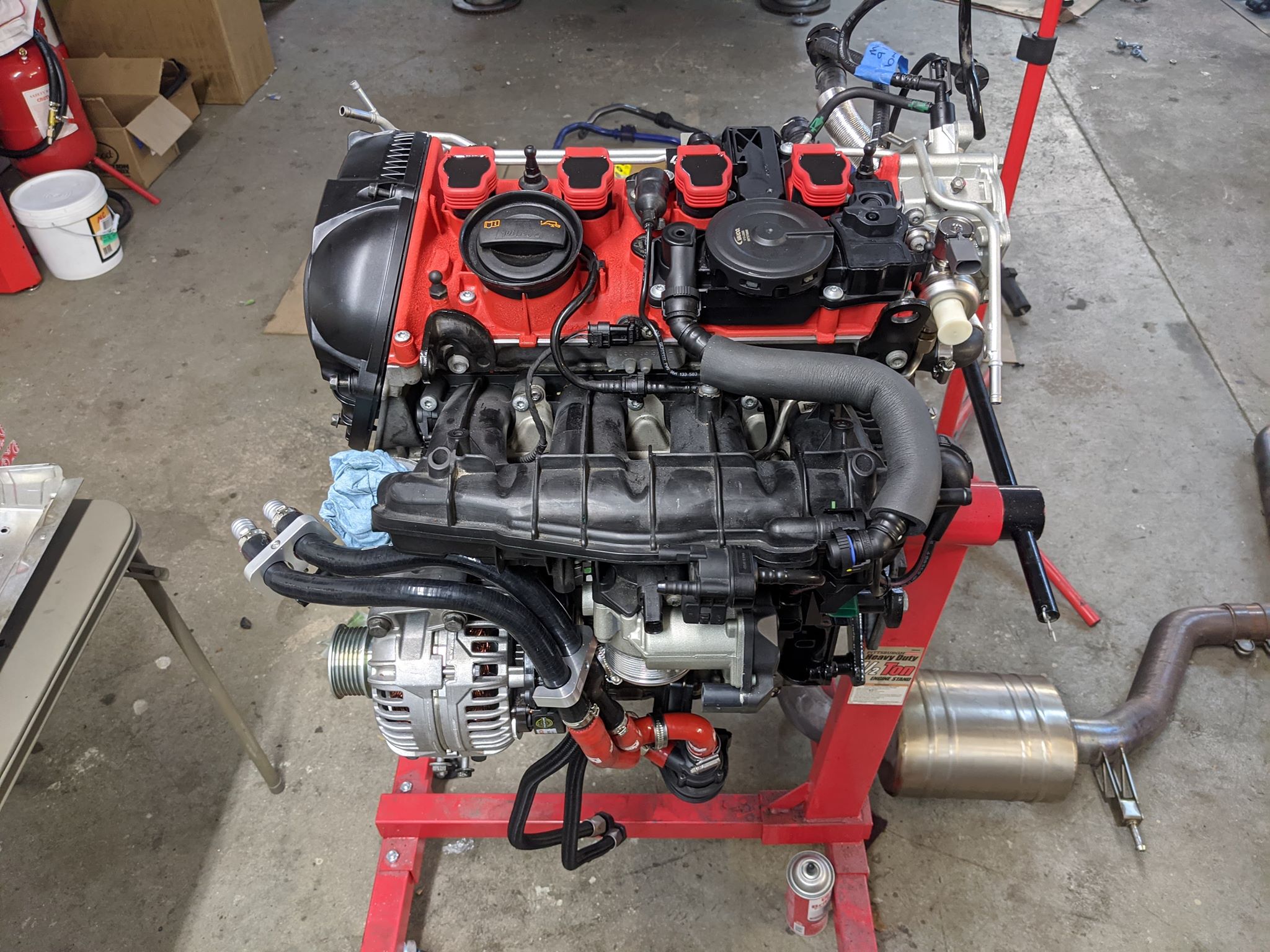 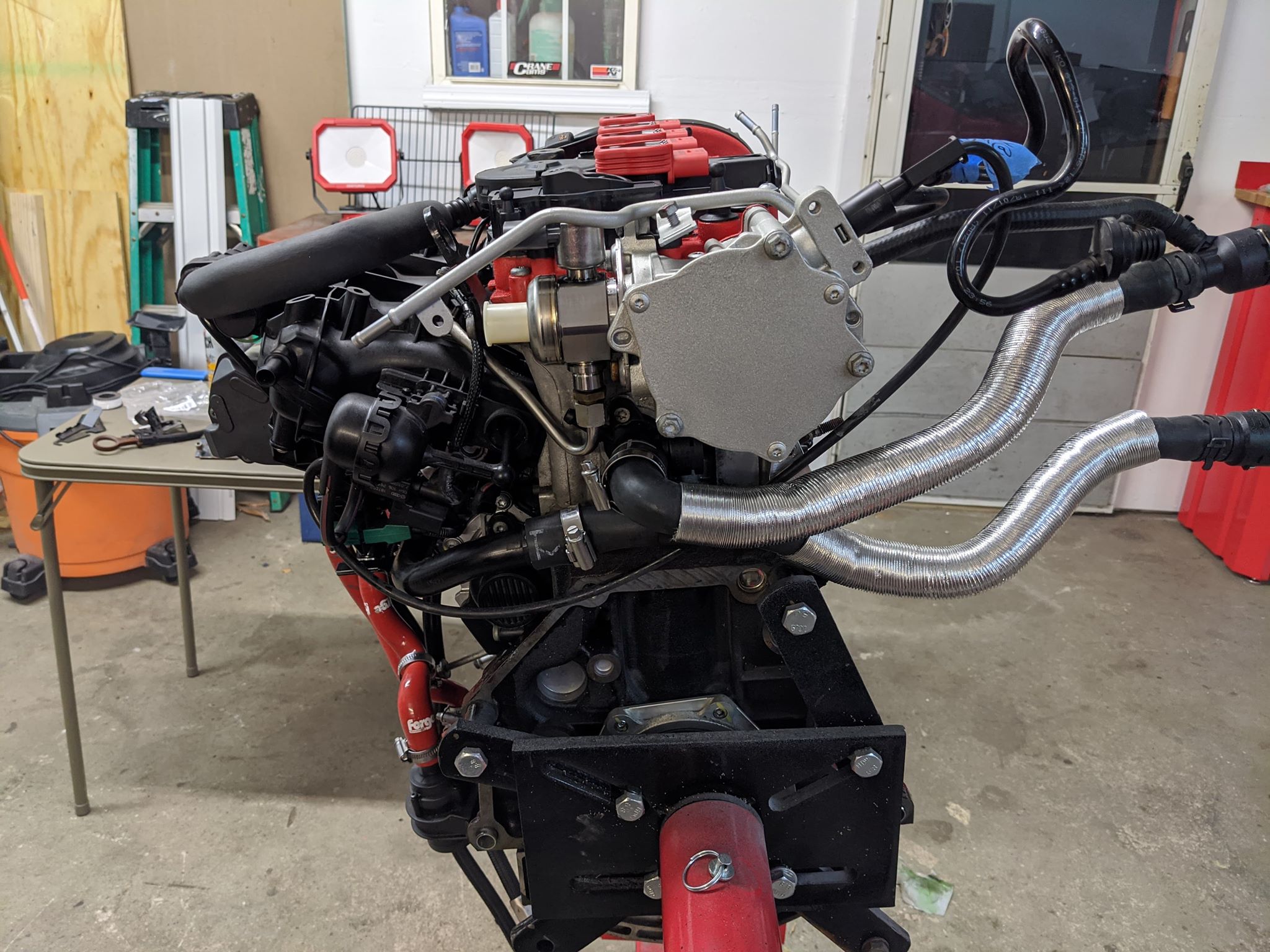 Only things left to do to button up the motor are to remove the exhaust manifold studs and replace with 034 studs & nuts, and to replace the lower timing cover. Also swapping the factory crank bolt for an ARP bolt. Then she'll be ready for the new turbo.

Finished re-painting the rear subframe, lower control arms, and rear spindles. Used Eastwood alumablast paint on the spindles, and Eastwood rust encapsulator & extreme chassis black on the subframe and control arms. Superpro end links are still in good shape, as well as the 034 upper control arms and toe arms. 034 spherical trailing arms are showing significant wear, so I ordered a rebuild kit. Apparently the MK7/MQB trailing arm bushings fit the MK6, which explains why they no longer had the MK6 rebuild kits listed (which still makes no sense to me). All new factory hardware. Also ordered new rear fender liners since my Hoosiers chewed them up last year. Will be running street tires this year so I don't believe I'll have an issue chewing them up going forward. Will upload pictures once everything is installed.

Verkline front subframe, steering rack, and front sway bar are installed. Still figuring out the control arms. Once control arms are mounted the spindles, coilovers, camber plates, and brakes will all be installed. Then transmission and axles will go in. After that, I gotta finish bolting in my roll bar & seat. Then it'll be a waiting game until the turbo kit is ready for pick up.
ASTRID - Suzuka Grey GTI Build Thread

Getting close.. getting so so close... 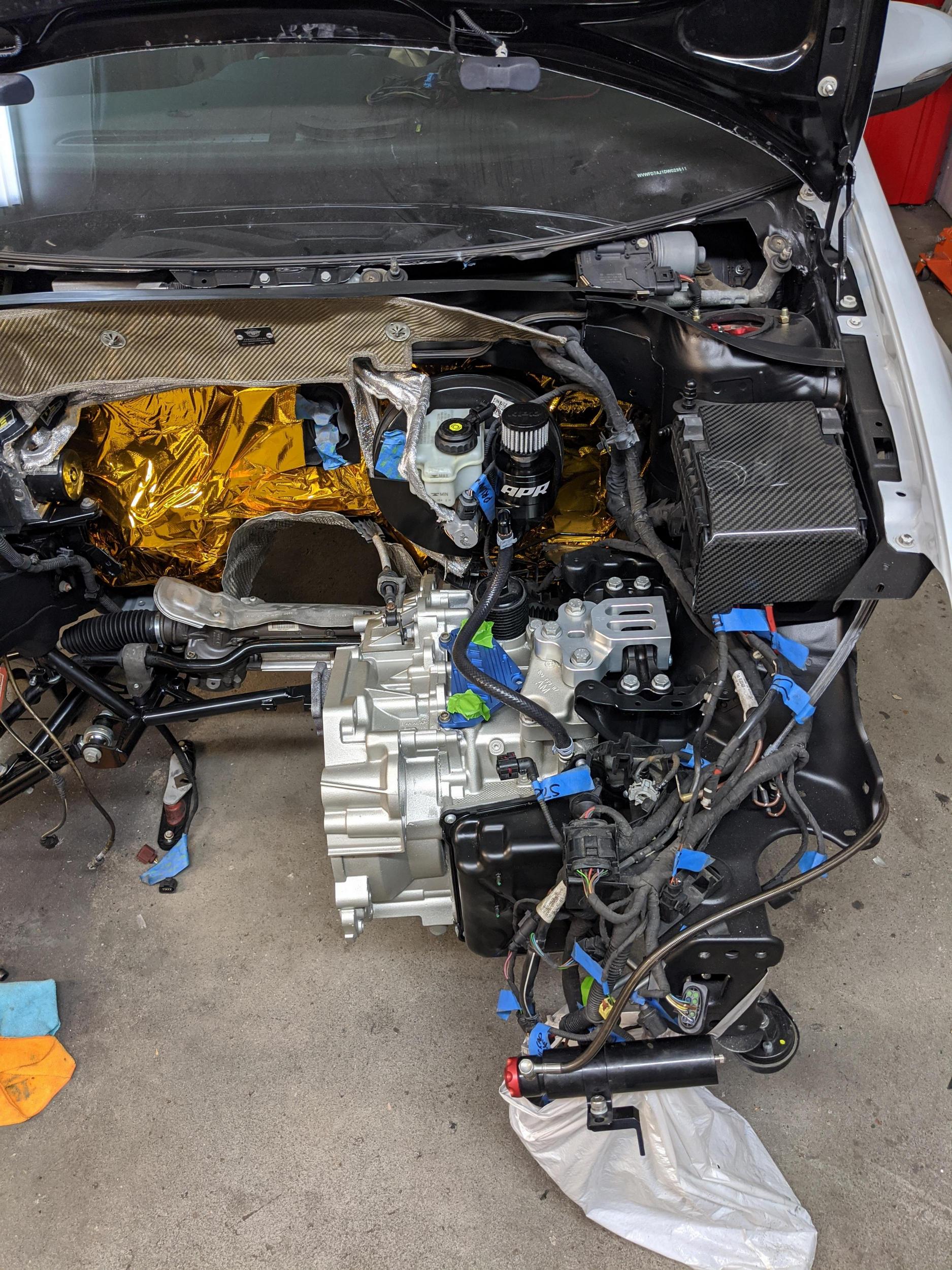 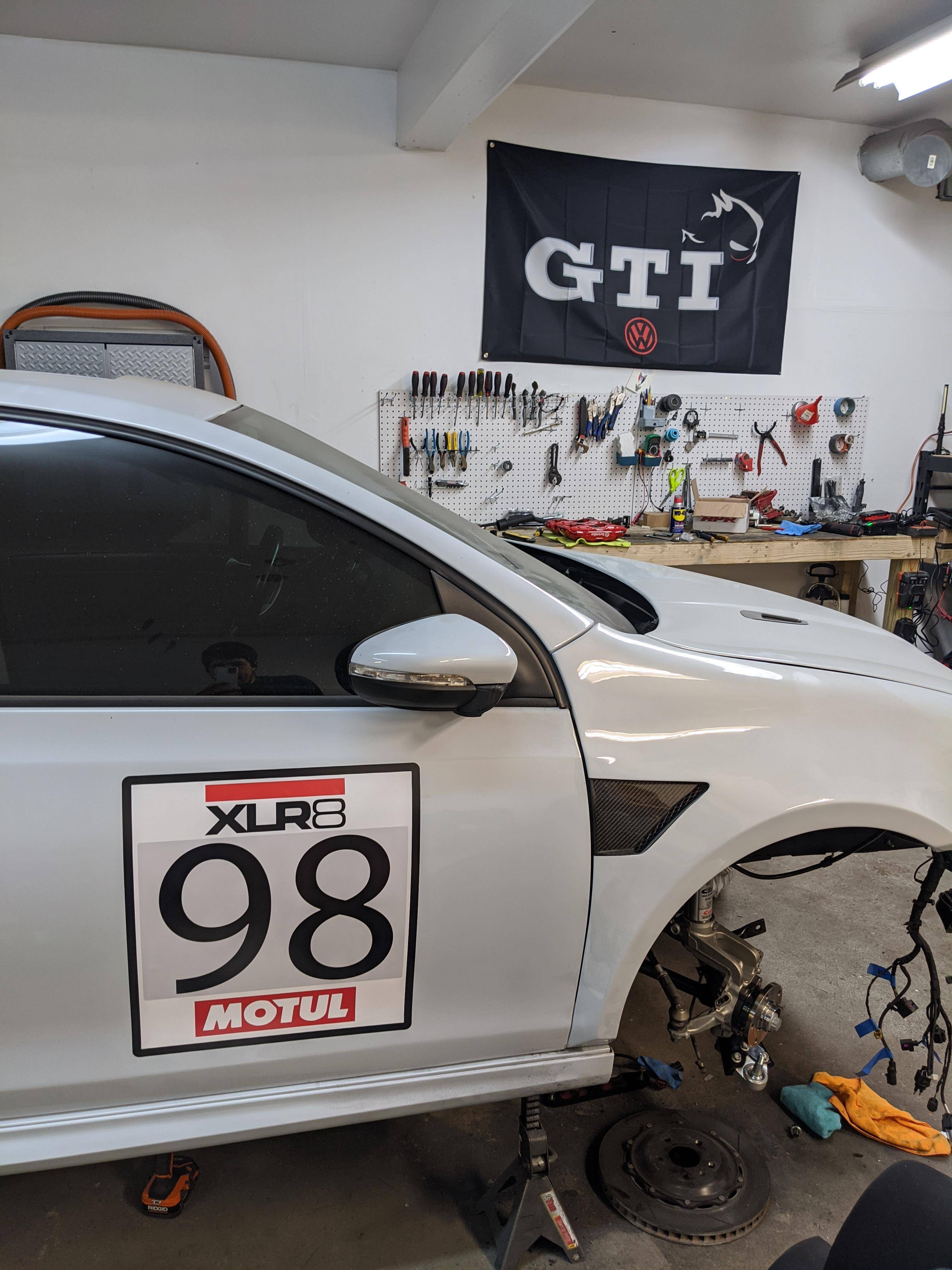 Lots of interior stuff to do, some motor and suspension stuff to do, but mostly done. Rear subframe and spindles were removed and completely repainted.

I obtained a non-sunroof headliner to be reinstalled, just waiting on my sunroof delete panel. Also got new carpet to replace my dingy carpet I had prior.

Car could technically be lowered on all 4 wheels now. Such a good feeling. Still waiting on my turbo kit from FFE.

jay745 said:
Good stuff. I've never seen a catch can for a trans before, what's the benefit of that?
Click to expand...

Same concept as the engine. There's a small nipple on the top of the trans that acts as a breather. For dailying its mostly just vapors so you won't notice much, but under track conditions the entire front and bottom of my trans would be coated in dsg oil. I had my DSG pan gasket replaced like 3 times thinking that was the issue but turns out it was the breather port puking fluid.

You can get a "breather box" off the MK7R that will effectively do the same thing, but there's no filter on it, so basically it moves the mess from down low to higher up in the engine bay.
ASTRID - Suzuka Grey GTI Build Thread

Wow, been working on vw's for a long time and I'm still learning apparently. Had no clue about that. I've got a manual and have never seen any trans fluid leaking under track conditions, I assume this is a dsg only thing?
MK5 Rabbit (Old Daily - RIP) Build Thread
MK6 K04 GTI Build Thread
MK5 Wolfsburg Jetta Daily Build Thread
Hit me up for Vagcom or DSG Service in Chicago (Cheaper than dealer/indie)

jay745 said:
Wow, been working on vw's for a long time and I'm still learning apparently. Had no clue about that. I've got a manual and have never seen any trans fluid leaking under track conditions, I assume this is a dsg only thing?
Click to expand...

I'm assuming so yeah. DSG oil pressures can get up to 300psi, which is why the USRT kit is the only high-pressure side cooler kit that works because their cooler will withstand the pressures...otherwise you're stuck with the CTS kit pulling from the low pressure side and you gotta deal with tapping the pan and all that other nonsense.
ASTRID - Suzuka Grey GTI Build Thread

Another big update coming soon...but in the meantime, thanks to Kyle aka A3-Owner, I just purchased a Nostrum Pump & KDI Injectors! It's an older Nostrum pump so it might not get me 100% to my power goals on e85, so I can either do E50 or I may sell the pump and go for the big bore once funds are available. But the injectors are totally good for what i am looking for power wise. After doing some research, you get basically 85-90% of the benefits of E50, going full E85 is overkill unless you want the extra cooling benefit, but I will be running a post-IC meth setup so I think the car will be just fine on e50.
ASTRID - Suzuka Grey GTI Build Thread

I'm digging the red cam cover. Too bad the passenger side cover is plastic. That would look great in wrinkle red.

Updated the front page since it was a bit out of date.

I also lost my garage space. New landlord bought out the building and is turning it into a automotive repair shop. He's giving me 2-3 months to find a new spot...but now I gotta race to get the car back onto 4 wheels (which in the grand scheme of things isn't much). Sucks that I fixed up the place a little since I figured I was gonna be there for another year or two, but I already have a few leads on new spaces that are close by and similarly priced. Hoping FFE can get me the turbo kit before I move so I can at least get the motor back in the car.
ASTRID - Suzuka Grey GTI Build Thread