My passenger's side camber plate has been rattling a LOT lately. It got so bad last night that I decided to park the car until I can repair it. :^(

Ronnie_B said:
How many miles did you get out of the original set?
Click to expand...

I designed an adjustable dead pedal for my GTI a while back. I finally had the time to machine and install it today. 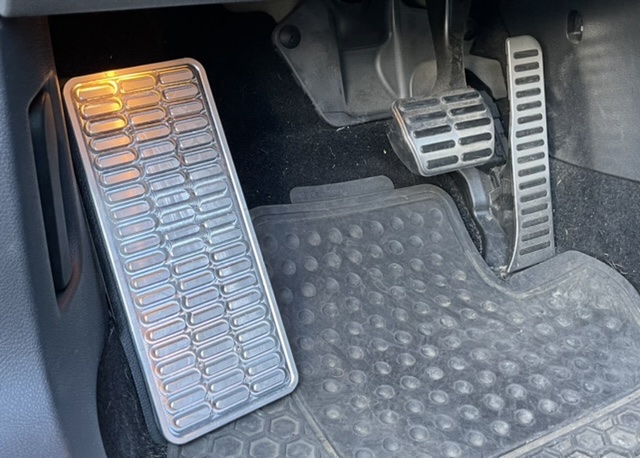 Over the weekend I installed a new set of Porterfield RS-4 front pads, reinstalled the brake deflectors, set the sway bars to hard, and swapped the wheels over to the RS-4s.

Yesterday I hit Laguna Seca with NCRC for the eighth time. I was running in the Solo group (3-8 days of experience) with point by passing. It was cold and sprinkling when I got there. During the first session the track was WET. During the second session the track was damp. The last three sessions were dry except for a rivulet of water running across turn three which made for some interesting moments. DSC kicked in almost every lap at that spot.

The car is dialed in pretty well, to the point that I don't think I'll be making any changes to it for the foreseeable future. Lots of fast cars in my run group, Model 3, 911T, 981, M3s, Alfa 4C, Jag F-Type, but I'm outpacing almost everyone else in the group. The only car that was faster was a Model 3 with suspension mods. For the first couple sessions there was some hesitation to let me pass. Around the third session most of them let me by without a problem. There was a guy in a bro'ed out LE-1 Camaro that was tip toeing around the track like an old lady. Literally doing 25mph in 45mph corners but he would hold me up for 1/4-1/2 lap every time.

ChrisAttebery said:
The car is dialed in pretty well, to the point that I don't think I'll be making any changes to it for the foreseeable future. Lots of fast cars in my run group, Model 3, 911T, 981, M3s, Alfa 4C, Jag F-Type, but I'm outpacing almost everyone else in the group. The only car that was faster was a Model 3 with suspension mods.
Click to expand...

Was it a white Model 3? When I was out there last year in the TTRS he gave me trouble too. LOL

Thumper said:
Was it a white Model 3? When I was out there last year in the TTRS he gave me trouble too. LOL

Did he disappear during the middle of the day to go recharge?
Click to expand...

I attended the SCCA AutoX Test and Tune at Crows Landing on Friday. The car felt pretty good. My fastest time was a 65.341. Out of ten runs I had three 65.XXXs. They didn't post times so it was hard to tell how I did compared to others. I did talk to a guy with a GT3 hand he was running 55s.

After the AX test and tune I left the tire pressures alone. After a week or so the tire pressure light came on and I filled the tires back up to 37psi. When I was done I drove my wife across town to the post office. The roads around here are rough and immediately I could hear the front driver's side strut rattling. UGGGGGGG.

A friend of mine has a lift so I asked if we could put my car on it and take a look underneath. I looked at both struts and didn't see any problems. I tried checking the torque on all of the chassis bolts but nothing seems to be loose. I did find that one of my rear sway bar end links was loose but it wasn't the cause of the noise up front. I have another replacement bearing for the GC camber plates but honestly I'm getting pretty tired of pulling the struts on this car. I think I've pulled them 3-4 times over the last couple years and my back just can't handle it anymore.

I'm trying to decide how to proceed:
1. I can have a shop pull the strut and try replacing the bearing.
2. I can have a shop replace the GC plates with something else. IMHO the only other option that looks reasonable for a street/track car that sees 10-15k miles a year is Kmac.
3. Ditch the camber plates altogether and go with SuperPro Roll Control Ball Joints. From what I've read you can get -1.4 of camber, but I won't have to deal with the NVH of the camber plates.

I tried one last hail mary this afternoon. I got the rain tray off, marked the locations of the top nuts with a Sharpie and then hit them with my impact. It doesn't look like them moved. I took it for a quick drive and the noise is still there. I made an appointment at DubClinic in Santa Clara to have them look it over.
Daily/Track Day Compromise
Integrated Engineering Stage 1 ECU + DSG tunes
Brembo GT 328mm BBK
H&R 26mm FSB
H&R 24mm RSB
Ground Control Camber Plates
SuperPro Roll Control Ball Joints
Koni Yellow Sports Shocks
VWR Racingline Springs
BFI LCA Anti-lift kit
034 Subframe locking collar kit
OZ Allegerrita HLT SE 18x8

I had another great day at Laguna Seca yesterday. They had two Point By groups. I opted for the faster group that had a 1:52 suggested minimum lap time and it worked out well. There were a lot of faster cars in my group but I was only passed or held up by someone a handful of times all day. The car ran great and most of my laps were in the low 1:5X range. I set a new personal best lap at 1:50.21 in the final session. At this point I think I'm running out of tire in the corners. The fronts were in the 150F range and even across the face. The rears are in the 120F range. This set of RS4s have 5 track days and a couple thousand street miles on them. I think if I want to go any faster I'm going to have to go to a faster tire like the NT-01. I'm open to suggestions.

In other news I ditched Harry's Lap Timer and tried out RaceChrono. I didn't seem to have the same problems with the OBDII data dropping in and out like Harry's did. I did have one session where the OBDII never connected to the app though. I figured out that I needed to go the BT menu on my phone and make sure that the GPS and OBDII connected BEFORE I started the app. Then everything worked fine.

I tried out a mounting the camera on my helmet too. I think this gives a better feel for where I'm looking and what I'm doing.

I put the street tires, wheels and brake pads back on the car today. Its looking like September 3rd will be my next track day.

The Hankook RS-4s have 5 track days and a few thousand street miles on them. I’m guessing that I can get 3 more days out of them.

I’m thinking about going to a slightly more aggressive alignment. I’d like -2.5 degrees of camber and .1 toe out all around.

Nice rims. Looks kind of identical to the Motegi rims I saw the other day.

My wife sent my brother and I to the Porsche Experience Center in LA last week for my 50th birthday. We were signed up to drive 718 Cayman S but they found a chunked tire on mine at the last second so I got upgraded to a GTS 4.0. They provide group instruction and have a series of courses that build up your experience in the cars. The instructor would demonstrate the exercise and then you'd get get to practice it for 10 minutes or so. The instructor gave real time feedback the whole time. Once you complete the exercises you do a lead follow session on their 1.3 mile handling circuit building up speed each lap. After that we did a run on the acceleration straight with a copy of The Carousel at the end. For those of you thinking about buying a P car I'd highly recommend it.

I've been looking at a used 981 for a while and this kind of sealed the deal for me. It was such a amazing driving experience.