Before you start, you have to decide if you're going to completely remove the control arm or leave it in place. I opted to leave mine on the car, if you want to pull them from the car to have more space to work see these instructions....

1. Remove the one 18 mm bolt and two 16 mm bolts that hold the bracket to the car

2. Wearing a pair of thick gloves, grab each side of the bracket and pull the bracket off of the control arm. Alternate pressure between the left and right side and it will come off, but it will take some effort. If you do not have enough space remove the plastic under-body piece that runs along the exhaust tunnel.

3. Mark the orientation of the stock bushing. I'm sorry I didn't take a good picture, but look at this one and you'll see where to make the mark. I used a blue sharpie to mark mine.

Note the position of the "thick" portion of the bushing. You'll want to leave the mark so that it centers the bushing when you install the new one. If you don't get it close you're going to have a difficult time getting it back on the control arm because the "bolt hole wings" won't clear the subframe. 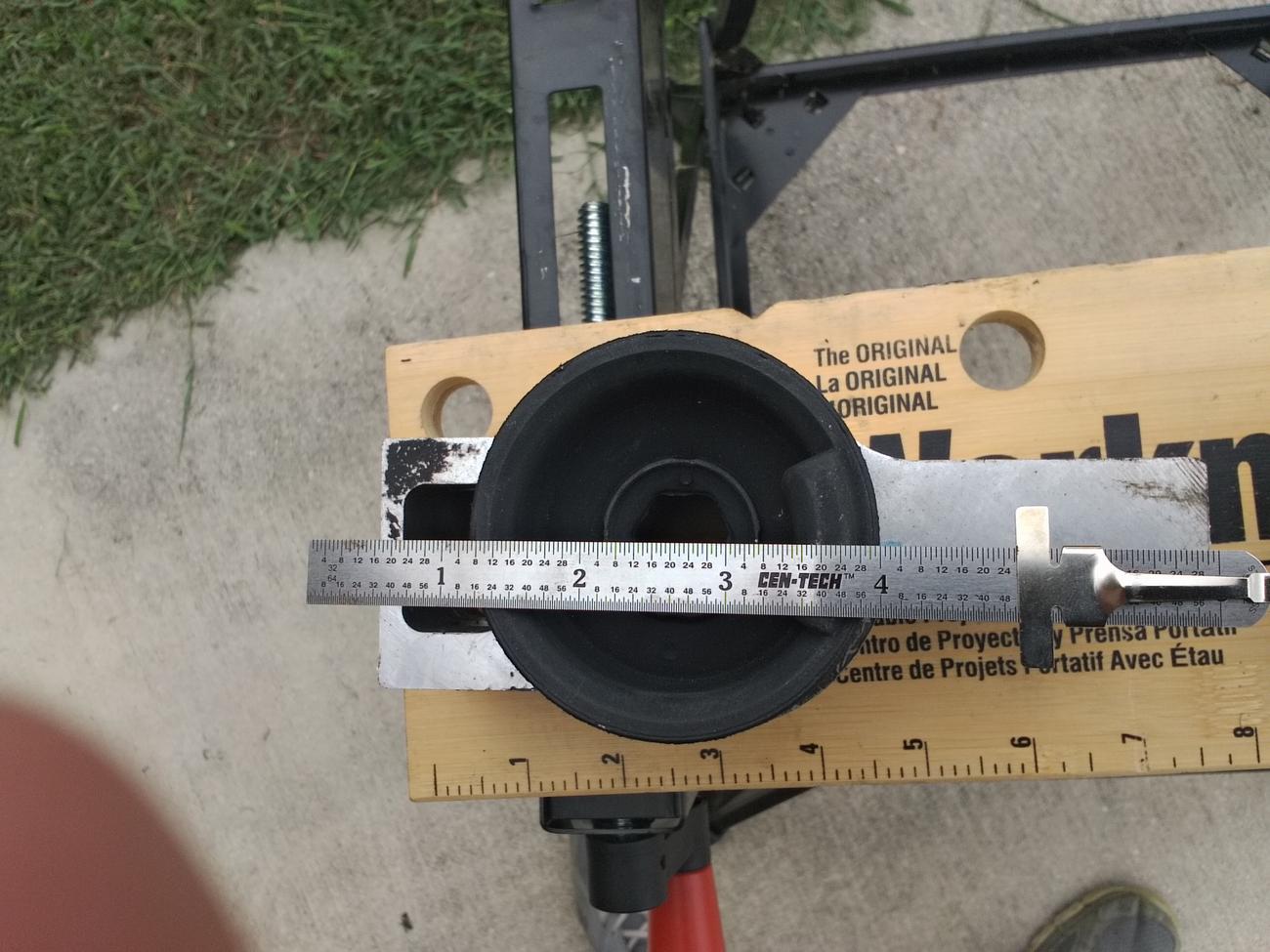 4. Using the appropriate size plate from the bearing/race installer set and your three jaw pullers, press the stock bushing out. The stock bushing comes out easily, you won't have to apply much pressure. The puller is fiddly and annoying to use, so it helps to have some way to suspend the bracket. You'll want to take care to ensure that the puller claws aren't in the way of the bushing so it can slide out cleanly.

It's a good idea to apply some grease to the puller threads so it turns smoothly. Also be sure to go slow and ensure that the plate is is being pressed through the housing as close to straight as possible. 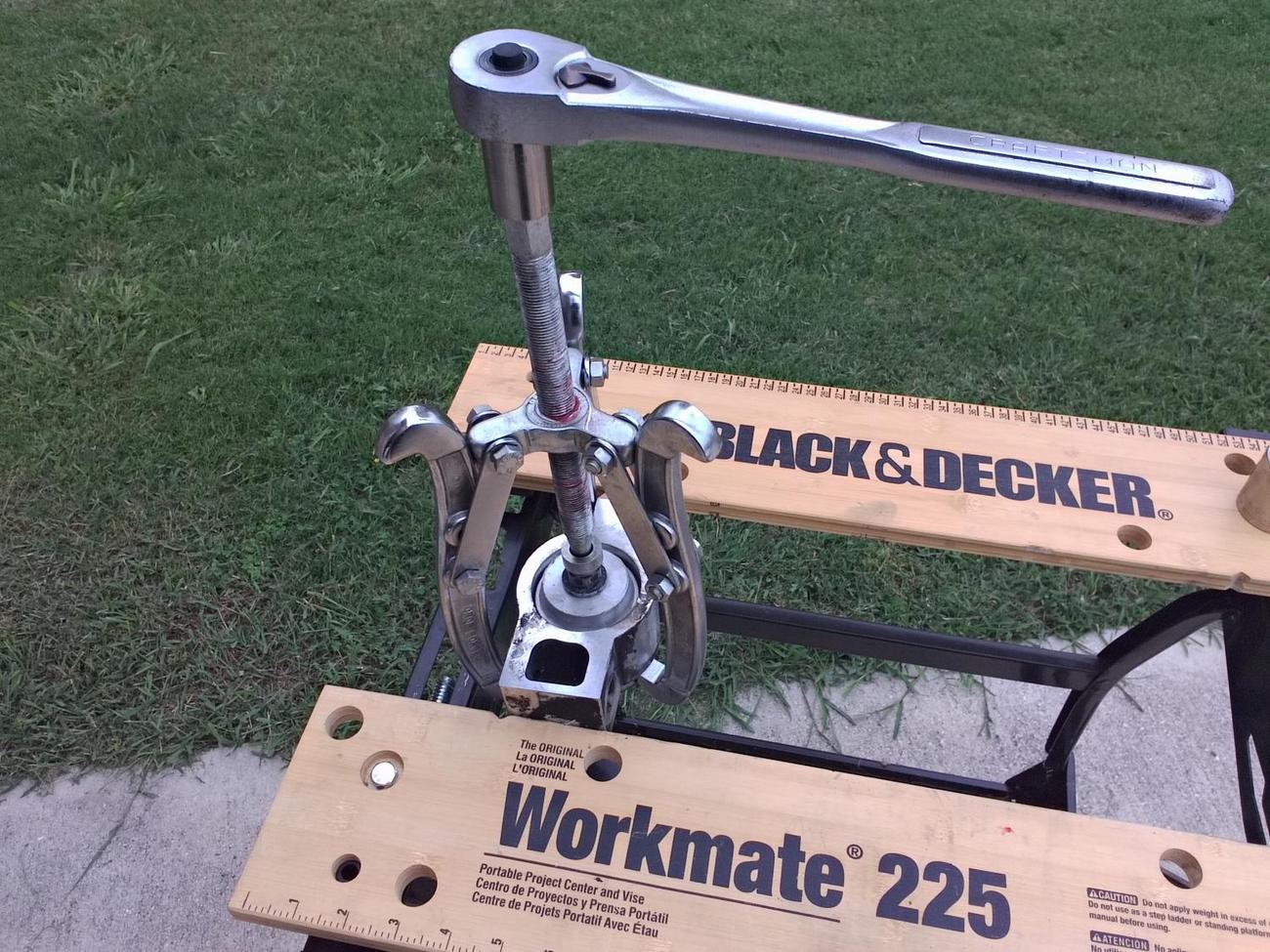 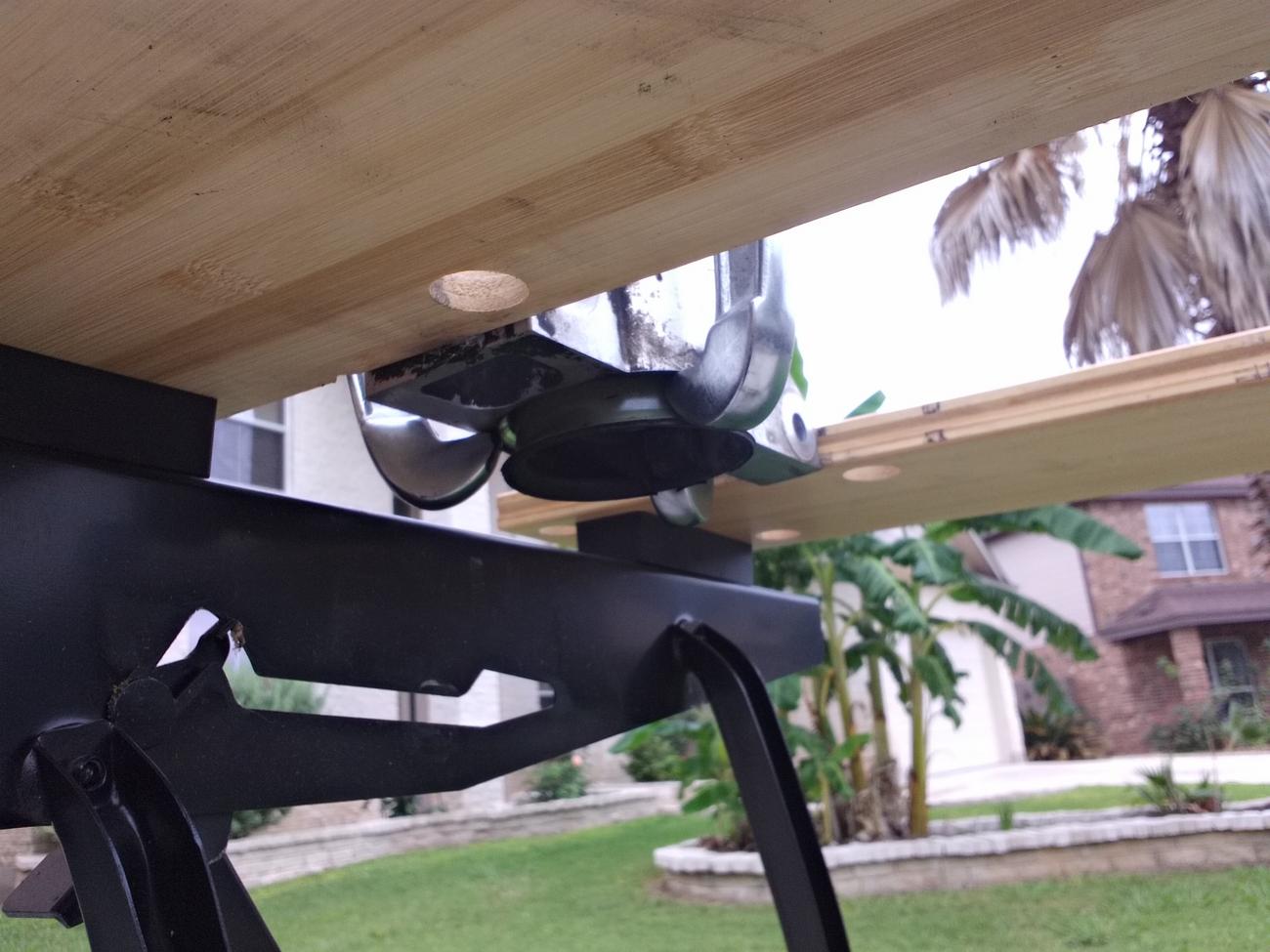 5. Apply some grease to the inside of the housing and the metal casing on the bushing. Be careful to keep the grease off of the rubber, it's not good for it. 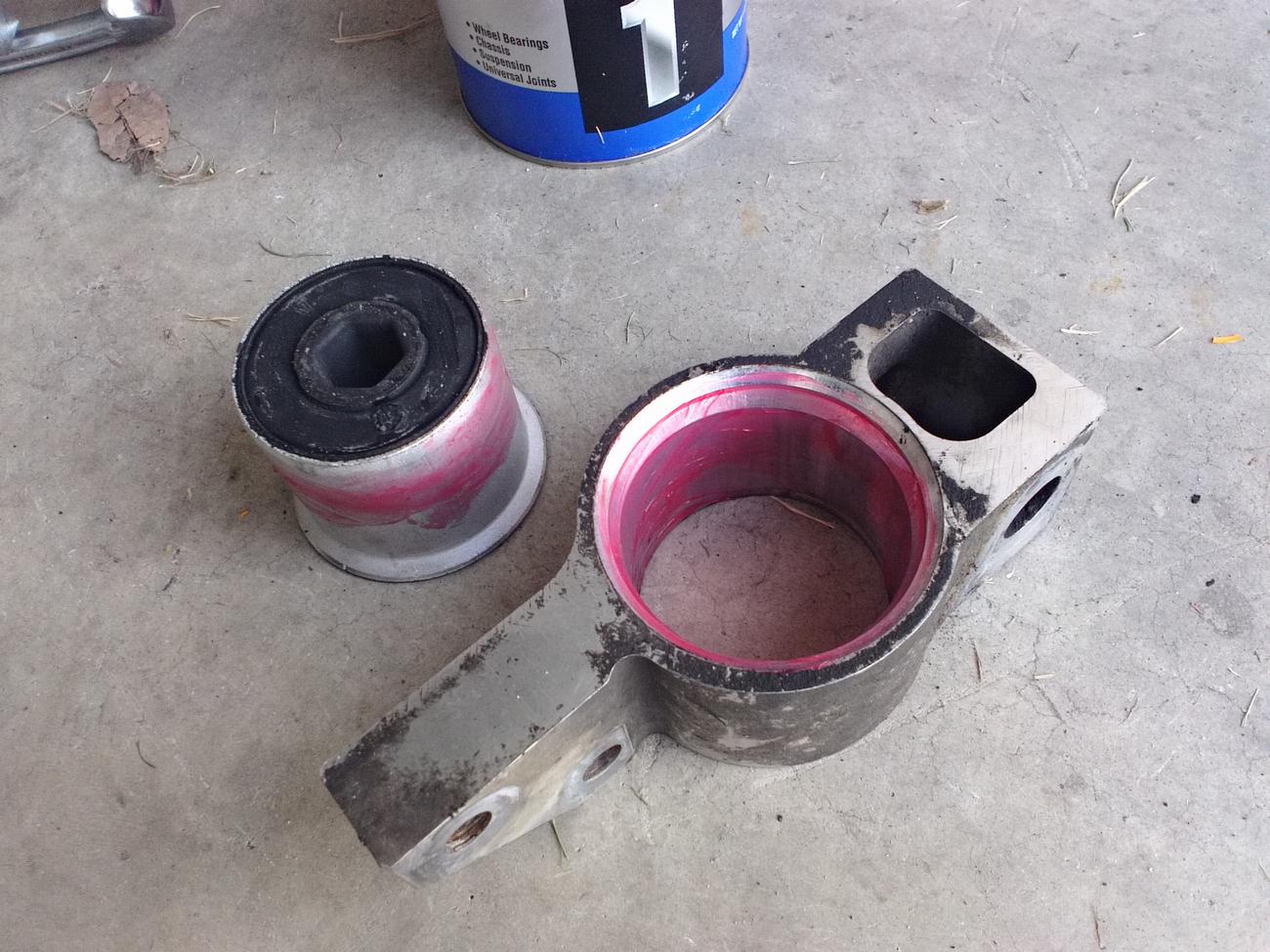 6. Line it up with your mark

7. Using an oversized plate from the OEM Tools kit, mend that shit with your Big Ass Hammer ™ until it's happy in its new home. After every strike look to see if it's going in straight, adjust where you hit the plate as necessary. The new bushing should go in without too much effort. 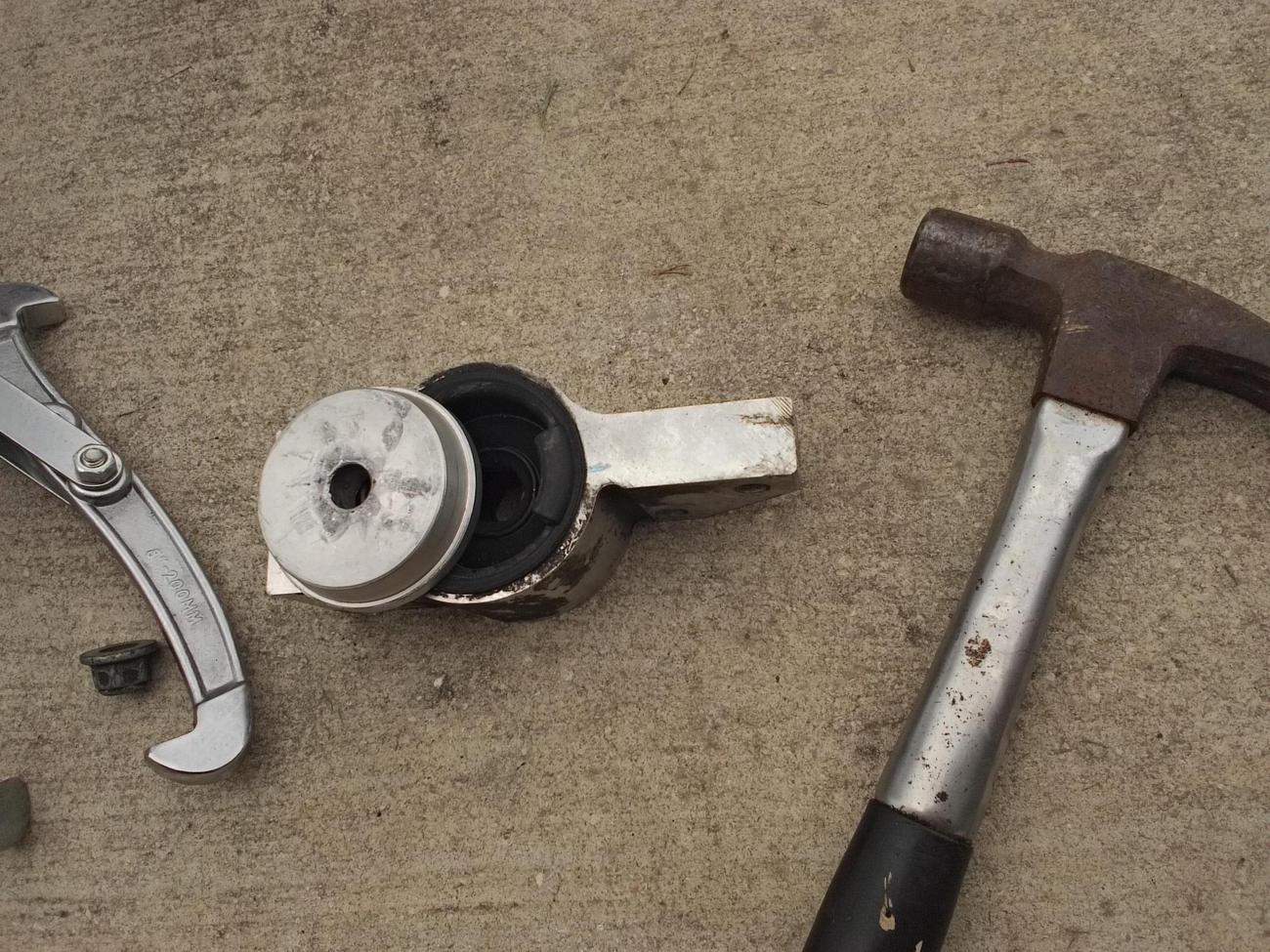 These aren't fancy two piece Whiteline bushings that slip on without much effort. I fought with the first side I did for a while before I decided to go buy a c-clamp and hope that did the trick. Thankfully it worked beautifully, even if it was a little clumsy.

8. Using your c-clamp and an over-sized plate, press the bushing/housing assembly back onto the control arm. 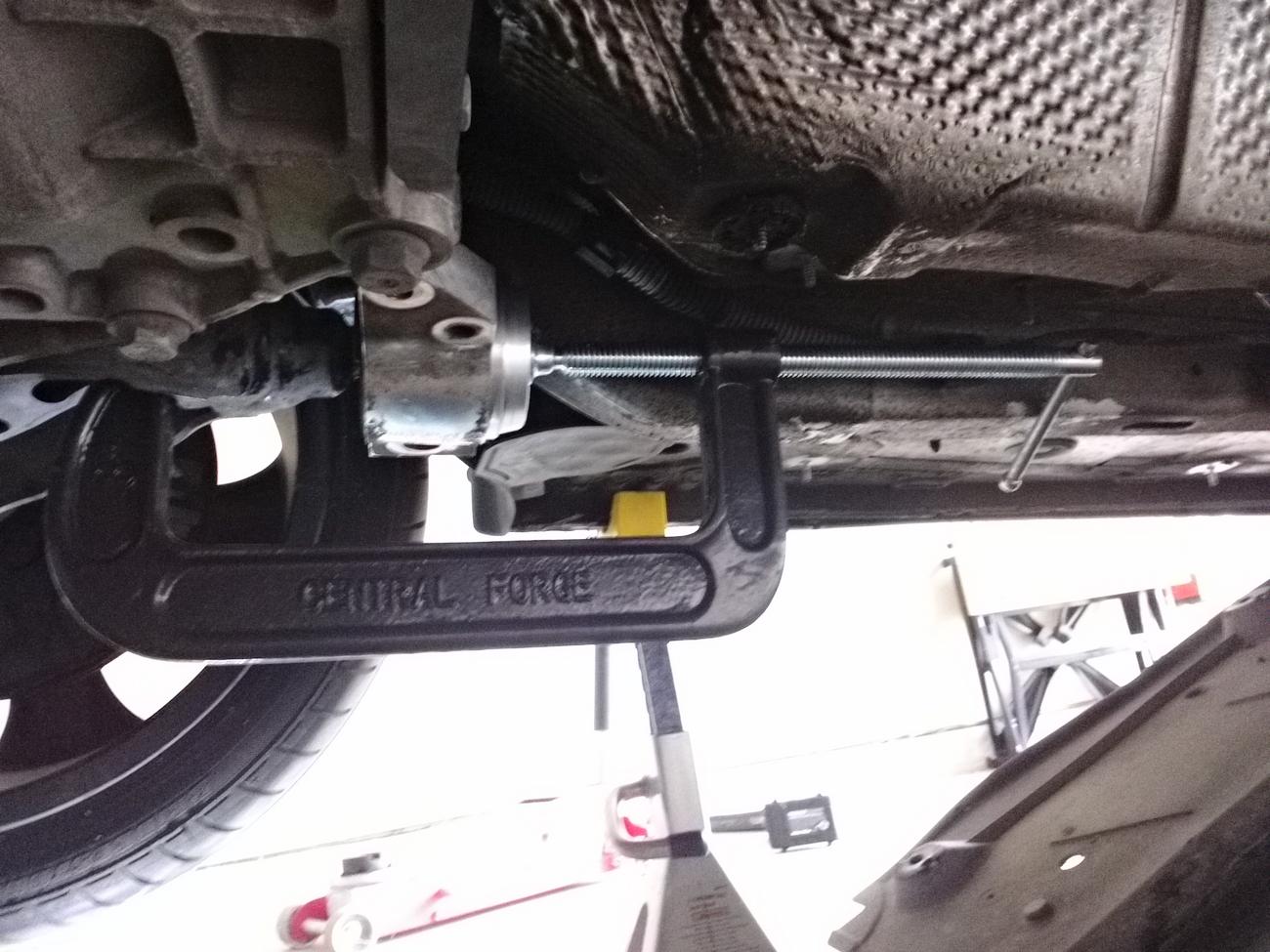 Step #8 is actually not bad, just keep twisting until it looks like this when you remove the plate... 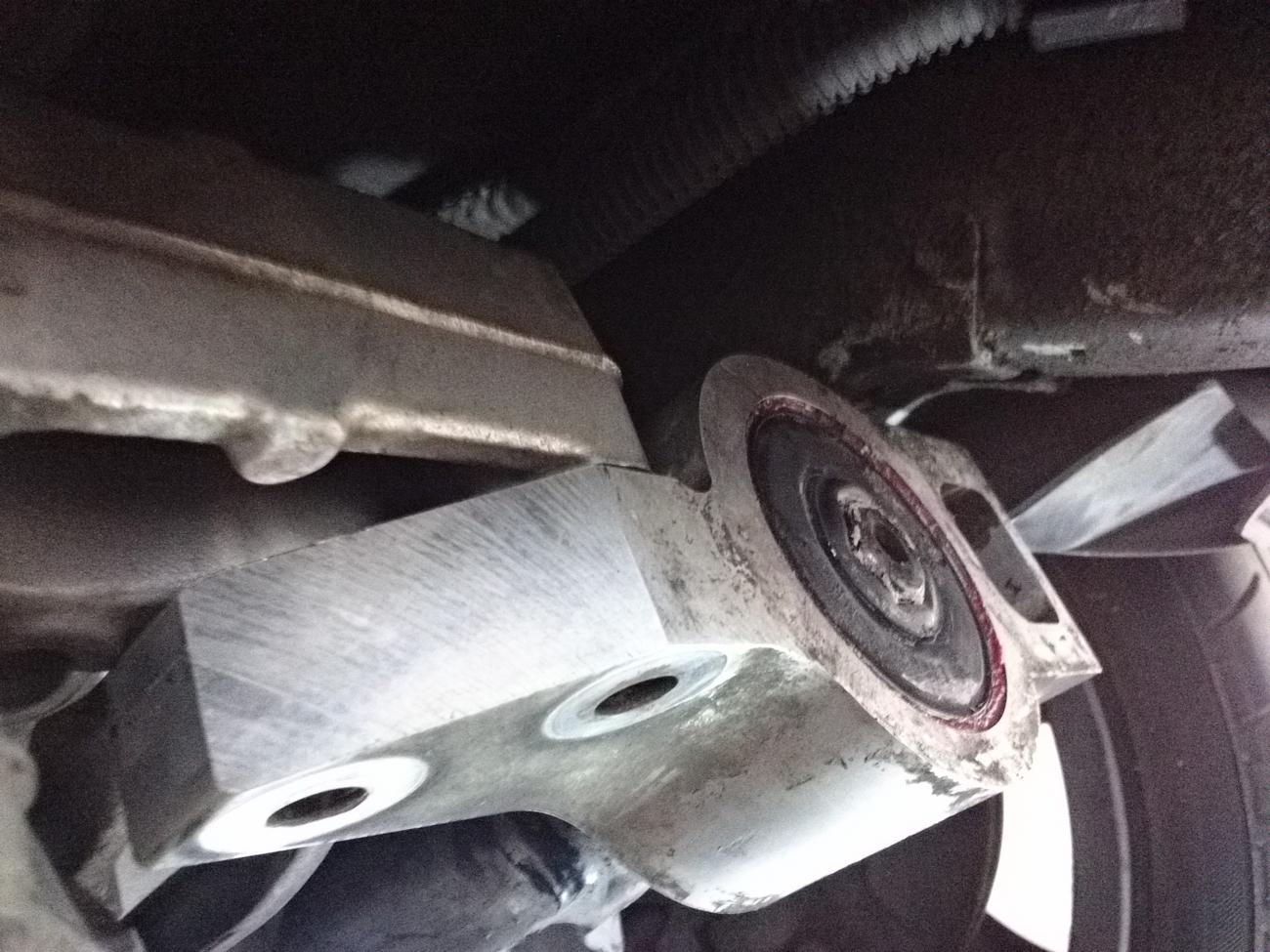 ...but you have a problem, the bolt holes aren't going to line up yet. It needs to look like this before the bolts will go in... 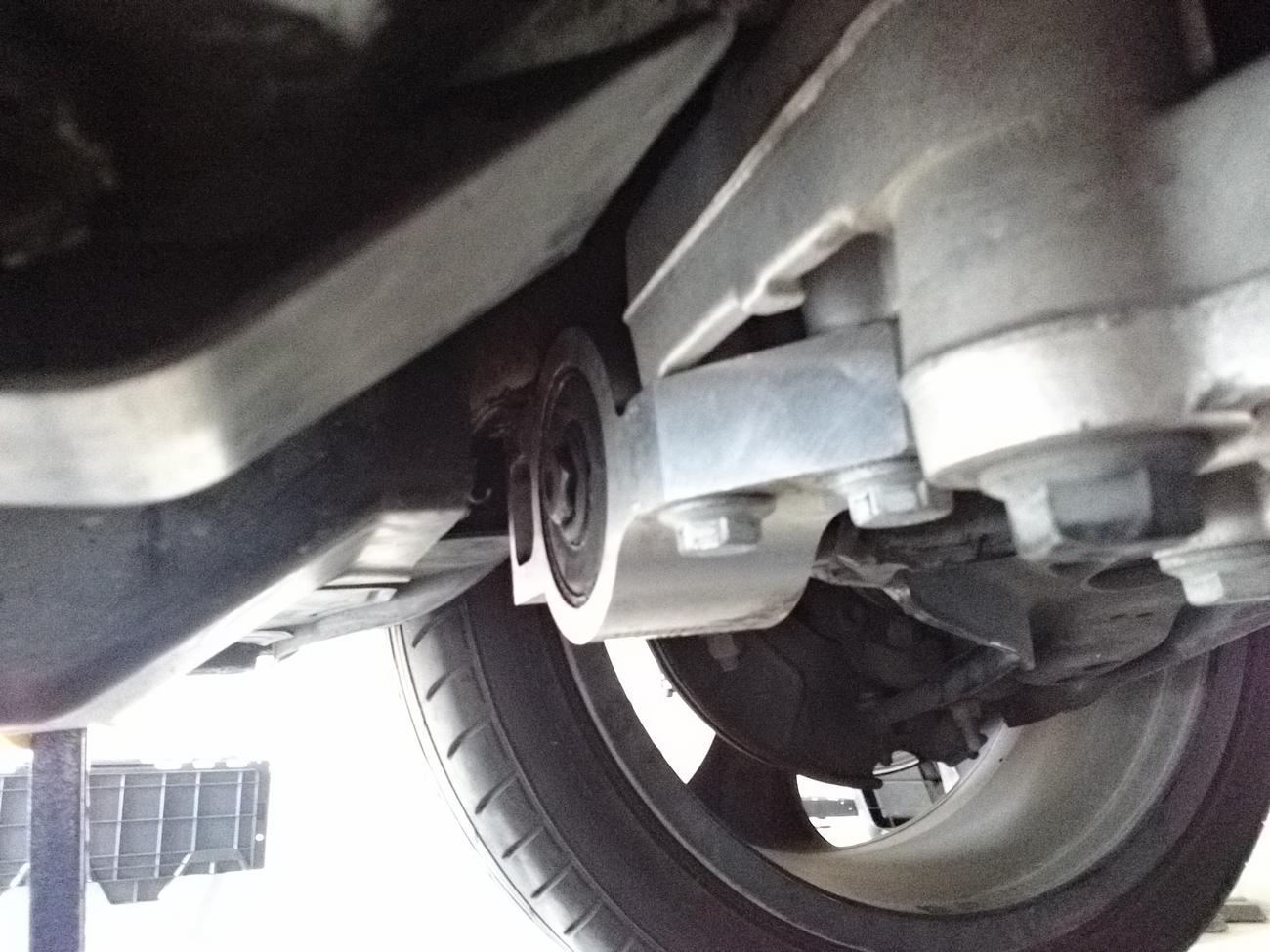 Note that the control arm comes through just a tiny bit more, which is what you need to get the bolts in.

9. Get creative. The flat plate wouldn't let the control arm come through and I didn't have a socket big enough to get all the way around the bushing and onto the bracket, so using some duct tape, a wrench, and a couple of smaller plates I did this... 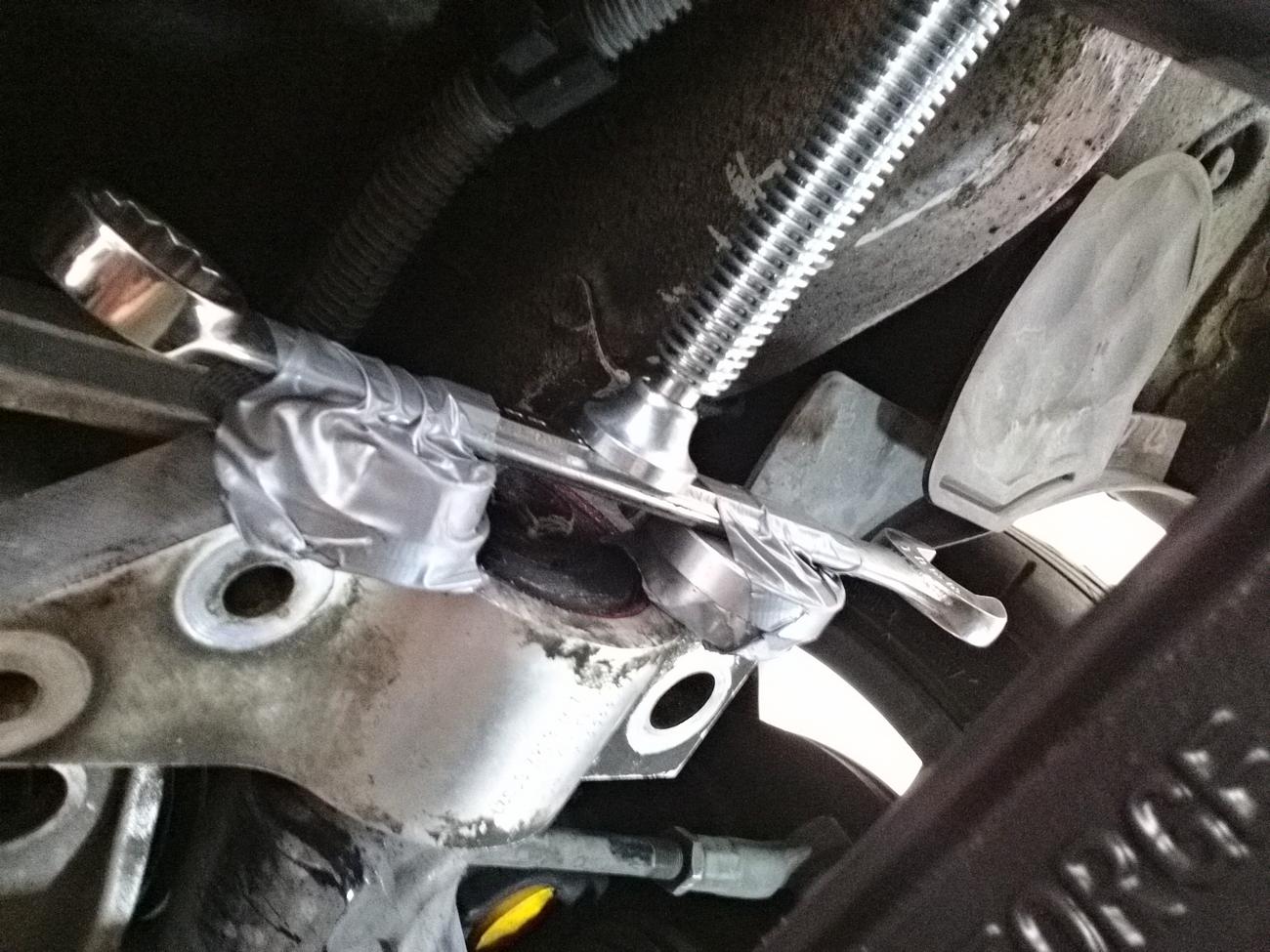 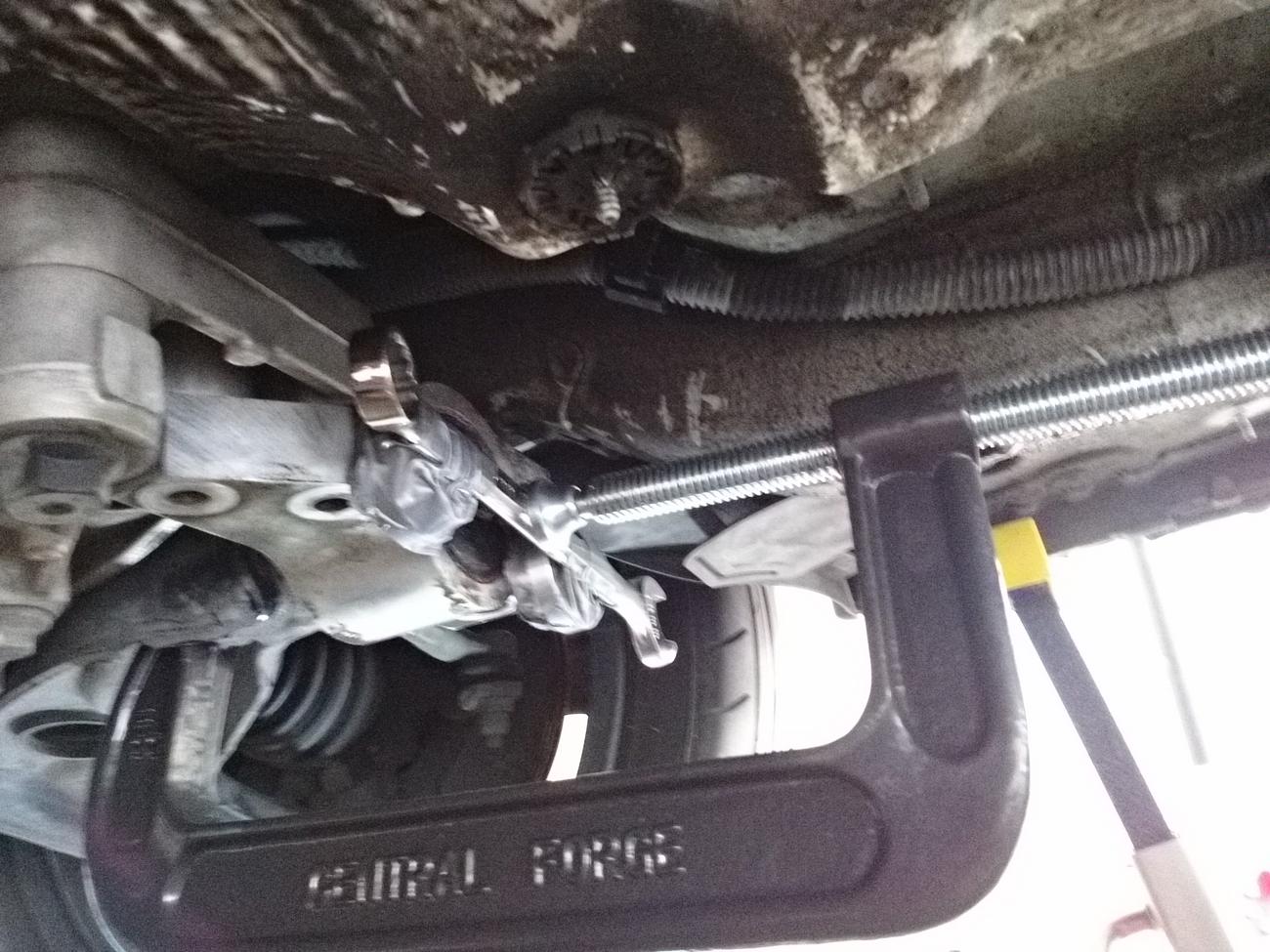 I'm sure there's a more elegant way to do that, but what I did worked.

10. Insert and torque the bolts. It helps to have a pry bar handy to push the control arm left and right a bit to remove pressure so you can more cleanly get the bolts in.

As I said before, use new bolts, and you'll started a few turns by hand before taking a ratchet to them. You really, really do not want to break these bolts off. If you feel like you have to force them in, stop, pull the bolt out, see if there's any damage to the threads, and try again.

zrickety said:
Nice job. What are your driving impressions? Curious why you went with these over the Whiteline?
Click to expand...

I actually have a set of black Whiteline replacement bushings, but I got them on sale before I had learned that I could get the TT-RS bushings not already pressed in a housing for dirt cheap. I opted for the rubber bushings because it seemed like I would get 90% of the performance with none of the drawbacks that can come with polyurethane.

Initial impressions.... less torque steer while braking and accelerating, less wheel hop, better traction that's easier to modulate at the limit, more direct steering, more responsive brakes, and better feel through the seat (this one surprised me). Overall the steering and brakes have less of an "elastic" feel to them while they're loaded as you go through corners and I have a much improved sense for what the inside front is doing when I start to apply power driving out of a corner.

I still need to get an alignment, so I anticipate that steering feel will also be improved. Right now I'm guessing that my toe is so far out of spec that I can't say for sure one way or the other.

Something that could be considered a negative is that you feel more of the road. To me this is a positive because I want that connection, but if you must have the smoothest possible ride you probably don't want these. They won't make impacts harsher if you have good dampers and aren't riding on the bumpstops (I have Koni Sports on stock springs), you'll just feel more connected with the road.

This is a fantastic upgrade for the money. With the new bolts I'm out about $55. Had I anticipated how difficult it would be to get the bushings back onto the control arms and had a c-clamp handy to do it with instead of having to run to the store I could have been wheels up to wheels down in about three hours, maybe faster if all my tools were laid out.
2010 GTI | Candy White | 6MT | 2 door
Koni | Eibach | Konig | Yokohama | APR | Vibra-Technics | Tyrolsport | 034 | Modshack | Dieselgeek | Raceseng | ECS | Hawk | G-LOC | Goodridge | Superpro | Whiteline | CTS

Blakcard said:
great job, great write up and review. it certainly gives one pause to consider options.
Click to expand...

I really see no reason for anyone to to spend $260 on S3 bushings anymore. The poly options I understand. But if you go through the effort of pulling the bushing mounts off the car to replace them with a stiffer OE spec option, removing the stock bushings and pressing the new ones into the old housings is a lot easier than I thought it would be.

Short Bus said:
I really see no reason for anyone to to spend $260 on S3 bushings anymore. The poly options I understand. But if you go through the effort of pulling the bushing mounts off the car to replace them with a stiffer OE spec option, removing the stock bushings and pressing the new ones into the old housings is a lot easier than I thought it would be.

Compared to my 115k mile stock bushings, yes. Minimal extra noise (maybe extra road noise, no squeeks or anything you might get from poly) and harshness, but a more noticeable impact on vibration. It's not like vibration from super stiff drivetrain mounts, more like you can better feel the condition of the pavement. On a decent, smooth surface they may as well be stock. But if you're on well worn asphalt or concrete you can feel the texture.

Compared to S3 bushings, I'm not sure because I haven't had them. I read a post elsewhere from someone who tried both that stated that the NVH increase with the TT bushings was minimal, but the performance increase was more noticeable.

My car is my daily driver and I'm taking care to not go overboard with it. I upgraded to Koni Sports and kept the stock springs if that tells you anything. Even with the crummy pavement where I live in perfectly happy with them.
2010 GTI | Candy White | 6MT | 2 door
Koni | Eibach | Konig | Yokohama | APR | Vibra-Technics | Tyrolsport | 034 | Modshack | Dieselgeek | Raceseng | ECS | Hawk | G-LOC | Goodridge | Superpro | Whiteline | CTS

Clownish said:
Yeap a cheap harbor freight press seems like it might be a good investment here lol

Sent from my iPhone using Tapatalk
Click to expand...

I am very much on the "BUY ALL OF THE TOOLS" team, and a hydraulic press would be nice to have around if you have room for it, but it's definitely not a requirement to do this. I really was surprised at how easily the stock ones came out. I'm guessing it was because the rubber was lined in plastic and not metal, but I believe they could have been driven out with a hammer.
2010 GTI | Candy White | 6MT | 2 door
Koni | Eibach | Konig | Yokohama | APR | Vibra-Technics | Tyrolsport | 034 | Modshack | Dieselgeek | Raceseng | ECS | Hawk | G-LOC | Goodridge | Superpro | Whiteline | CTS

It's been over a week since the wheels were aligned and the bushings have loosened up a touch. Either I've quickly gotten used to the small increase in NVH or it's settled down to about where I feel is appropriate for a sport compact.

my mk6 is creaking and cracking! I need to get my arms/bushings checked

Howcanifixthis? said:
my mk6 is creaking and cracking! I need to get my arms/bushings checked
Click to expand...

Mine was giving me some creaks over a specific dip in the road on my way home from work. New struts, tops w/bearing, and rear position control arm bushing and it's gone.

The bushings this thread shows you how to replace... on my car they were looking sad, but they hadn't yet failed. I think a noise from there would probably be a louder "clunk" if the control arm was hitting the housing.
2010 GTI | Candy White | 6MT | 2 door
Koni | Eibach | Konig | Yokohama | APR | Vibra-Technics | Tyrolsport | 034 | Modshack | Dieselgeek | Raceseng | ECS | Hawk | G-LOC | Goodridge | Superpro | Whiteline | CTS

Nice write up! Was actually going to sell a pair of these in the next few days...but now I'm not so sure.
S

Very helpful. Going to change with the Whiteline bushings to the lower control arm in my 12' GTI. Wonder if the three claw puller is a must coz it appears that the C clamp alone would be sufficed?
I'm going to replace the front busing as well. Any advice on how to replace this piece would be appreciated.