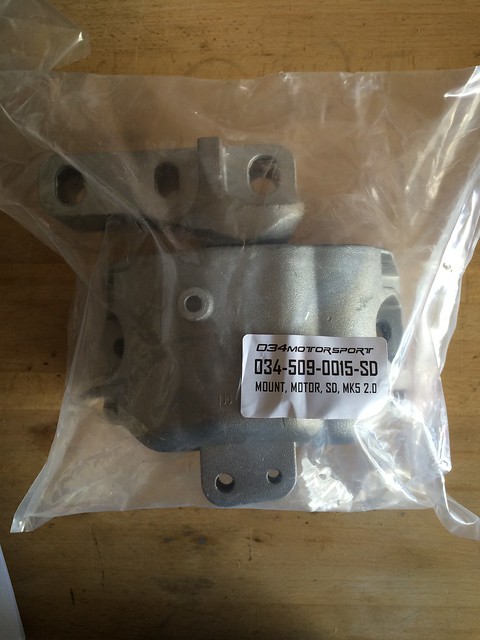 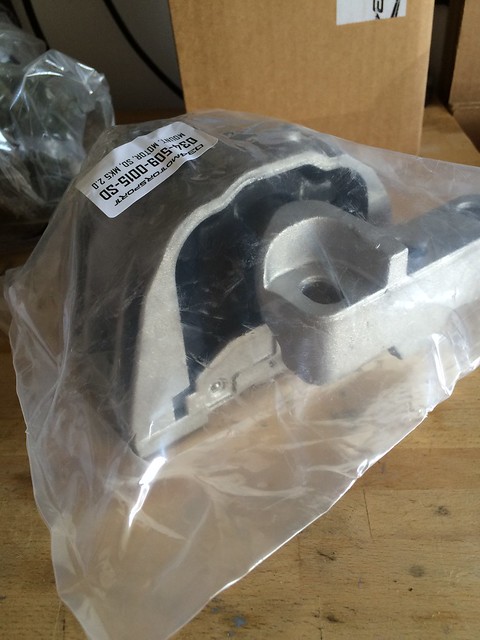 A while back, FLTrooper posted a great review titled ”034Motorsports Street Density Mounts Install/Review” which has photos of the OEM mounts vs. the 034Motorsport mounts and also covers the actual installation. I’m a little late to the game with these mounts but I wanted to post about my recent troubleshooting experience and provide a direct comparison to the BFI Stage 1 engine and trans mounts.

Back Story:
23K miles ago I had a new long block engine covered under warranty. At that time I opt’d to re-installed brand new OEM engine and trans mounts since I didn’t have any background on the various mount options. Over the past year I finally turned my attention to engine and trans mounts to try and reduce wheel hop while not adding a ton of NVH inside the cabin. First, I installed the BFI Stage 1 Engine Mount. It was good looking, the driving feedback was great, there was no major increase in NVH and acceleration felt smooth. 15K miles after the engine mount was installed, naturally, I picked up the matching BFI Stage 1 Trans Mount on sale at Waterfest. When removing the OEM trans mount, we noticed it was nearly destroyed. The mount was very loose and squeaked a lot when we moved it around freely by hand. It seems that the stiffer engine side mount transferred the energy to the path of least resistance, or in this case, the OEM trans mount. I felt better about having the BFI Stage 1 Trans Mount on hand to “fix” the rapid deterioration of the OEM trans mount. After installation I fired the car up and I immediately regretted selecting this mount. With the OEM clutch and unsprung South Bend drop in clutch disc, it sounded like the clutch was trying to saw through the firewall. Vibrations increased and all clutch noises while driving were amplified. I gave it the proper break in to see if the NVH would subside but unfortunately it didn’t. The BFI mounts are quality components but for me, the poly was too much on my daily driver, even at Stage 1. Again, thanks to FLTrooper’s ”034Motorsports Street Density Mounts Install/Review”, I called up Jeremy at 034 to order their Street Density trans mount in the hopes of less NVH. As expected, moving over to the 034Motorsport Street Density trans mount settled everything back down but part of me didn’t like the fact that the mounts were still mismatched by company and with poly vs. rubber.

Mis-Matched Mounts:
Shortly after these mounts, my clutch started acting up and I decided to move over to the full Audi TT-RS pressure plate, TDI clutch disc and new DMFW combo. From the moment I left the shop after installation through 1,500 miles of break in, revving in neutral (clutch pedal depressed or not) or even driving in gear through 1,500-1,800 rpm caused a nasty vibration coming from the engine/trans assembly. When the revs pass 1,800 rpm it smoothed out completely. We reviewed everything, checking the condition of my 034Motorsport Street Density trans mount (was installed well before clutch and I didn't have this issue) and other areas in general. The mass consensus was that the new OEM DMFW may have be imbalanced. I got a new flywheel under warranty and had the clutch torn down again to replace the OEM DMFW. Unfortunately, this didn’t solve the issue.

At this point I was determined to find the issue. For the next step in troubleshooting, I swapped the BFI Stage 1 engine mount for the matching 034 Street Density engine mount and the vibration at 1,500 - 1,800 rpm was gone! It seems that adding the Audi TT-RS pressure plate, TDI disc and new DMFW made me notice this vibration on the trans side of the mount combo, possibly since the poly engine mount was stiffer sending more feedback to the rubber trans mount. Why would this happen after a new clutch install? Possibly the heavier Audi TT-RS pressure plate? I’m not sure but replacing the BFI Stage 1 engine mount (poly) with the 034 Street Density engine mount (rubber) did the trick. Now the engine and trans mounts are both the same durometer rubber from the same company, no more mismatched mounts with different materials (poly vs. rubber) and different companies. Turns out moving over to a matched 034Motorsport Street Density Engine & Trans Mount combo settled all sorts of NVH issues I had before.

Product Description:
We're proud to announce the availability of the Density Line Engine Mount Pair for MkV & MkVI Chassis Volkswagen and 8P & 8J Chassis Audi models! 034Motorsport's Density Line Mounts are the new standard in comfort and performance. Our mounts are redesigned with performance in mind, and manufactured from high-durometer rubber for increased performance and durability, without sacrificing comfort. Density Line Mounts are void-free and fluid-free, eliminating the slop associated with the factory mounts.

Street Density:
The Street Density Engine Mount Pair is manufactured from 60 durometer rubber, which is approximately 35% stiffer than stock. Since the mounts are also void-free and solid-filled, the resulting mount is approximately 60% stiffer than stock. The cast aluminum mount bodies have also been redesigned to cope with the added stress of spirited driving. The result is greatly reduced drivetrain slop, crisper shifting, and minimal wheel hop, without any significant increase in noise, vibration, or harshness (NVH) inside of the cabin. These mounts are a completely re-engineered performance solution, not just inserts for use with the factory mounts.

Warranty:
•1 Year Limited Replacement Warranty (If you encounter any issues with our products outside of the warranty period, we will work with you to provide a resolution.)

High-Durometer Rubber vs. Polyurethane:
Density Line Mounts are manufactured from high-durometer rubber instead of polyurethane for a number of reasons. While vulcanized rubber mounts are more expensive to prototype due to increased complexity of manufacturing and high initial tooling costs, rubber is inherently better than polyurethane as a damping medium for mounts and bushings.
Rubber is able to deal with stress under both tension and compression, while polyurethane mounts rely on the damping medium to be effective only under compression. Rubber is also excellent in shear, where polyurethane is ineffective, making it ideal for control arm bushings that apply a shear force to the bushing during articulation.
Rubber does not pack and wear like polyurethane does, which ultimately results in a long-lasting part with consistent performance and comfort.

Street Density vs. Track Density:
We recommend Street Density Mounts for all daily-driven vehicles. They offer a significant increase in performance with a minimal increase in NVH transfer into the cabin. Track Density Mounts are recommended for purpose-built track cars, or those who do not mind significantly increased engine noise and vibration in the cabin.

Installation:
Installation is very straight forward for those that have followed step by step install guides or other forum reviews. As always, use new OEM bolts with the proper torque spec values, proper jacks, jack stands and tools to make this a safe installation.

Overall Feedback:
While these 034Motorsport Street Density Engine & Trans mounts are not the stiffest mounts on the market and still allow movement in all directions, the low NVH is a blessing for a daily driver. Throttle input and acceleration are in tandem and acceleration feels smooth and crisp without any unwanted NVH in the cabin of through the car. At the time, I was interested in the latest 034Motorsport Billet Aluminum 8P Audi A3 2.0T FSI & 2.0 TSI Performance Engine/Transmission Mount Pair and went as far as to open the 034Motorsport's Motorsport Engine/Transmission Mount Pair thread for overall feedback before ordering but after reading SKorea808’s review titled “034Motorsport Billet Aluminium Mounts + HPA Motorsports Core Interlock 90A Review” it seems these mounts are definitely motorsport variants which limit any side to side movement of the engine and trans. Overall, I’m happy I chose the 034Motorsport Street Density Engine & Trans mounts for my build. Thanks to 034Motorsport for all of the help and guidance over the phone and email.
Pag Parts EFR Turbo Thread: HYDE16 - The Pag Parts EFR Turbo Kit
Build Thread: HYDE16 - Project Jekyll & Hyde Build Thread
Facebook: Ryan Jacobs
Instagram:@becauseHYDE16
YouTube: HYDE16
P

looks like these will be my picks as well. dont get me wrong id love the lock down feel and revving would feel like theres a v8 in the car but as a DD i cant handle all that NVH
0

PaulyFe12 said:
looks like these will be my picks as well. dont get me wrong id love the lock down feel and revving would feel like theres a v8 in the car but as a DD i cant handle all that NVH
Click to expand...

EXACTLY! You want the V8 feel add a VWR subframe mount and Vibra-tech dogbone bushing like me. Best of all worlds!


09GTIJoE said:
i have the track density mounts and I love them
Click to expand...

Hyde16, would a hpa red puck do the same thing as the vibrio tech bushing? Or is the hpa softer?

PaulyFe12 said:
Hyde16, would a hpa red puck do the same thing as the vibrio tech bushing? Or is the hpa softer?
Click to expand...

The HPA puck replaces the lower subframe mount, you should go right for the VWR mount since it replaces lower and upper.

nice to see the jump ryan! I have these mounts too and they are fantastic.

If anything, I would recommend getting Vibratechnic subfram mounts and the dogbone/pendulum mount. They actually have a full set you can purchase. Vibratechnic originally made VWR's subfram mount before VWR went polyurethane with it.

So if you go with the Vibratechnic set, you'd have full rubber everywhere (if you're OCD like that). plus it should be cheaper to buy it all from one place than mixing and matching.

Nice review. These are on my list. VWR pucks were on my list as well but this vibratronics piece is new to me. Got me thinking...

I love my Street Density Mounts. Like mentioned in the review you will still have engine movement but it seems to snap back into place versus bouncing all over the place with the OEM mounts.
J

Great, now you got me planning on spending more money.......

Jerseynoob said:
Great, now you got me planning on spending more money.......
Click to expand...

Ryan What do you think of the vibratech dogbone bushing? Did you notice any performance benefits? Reduced wheel hop? Did it add any NVH? I only have the HPA puck and I still get wheel hop sometimes and would like to get rid of it without adding a ton more NVH.

GreasyGinzo said:
Ryan What do you think of the vibratech dogbone bushing? Did you notice any performance benefits? Reduced wheel hop? Did it add any NVH? I only have the HPA puck and I still get wheel hop sometimes and would like to get rid of it without adding a ton more NVH.
Click to expand...

I didn't notice anything, it was preventative after all other OEM bushings were upgraded, this surely was the next to go with 60K miles on it already. It definitely added the most NVH.
Pag Parts EFR Turbo Thread: HYDE16 - The Pag Parts EFR Turbo Kit
Build Thread: HYDE16 - Project Jekyll & Hyde Build Thread
Facebook: Ryan Jacobs
Instagram:@becauseHYDE16
YouTube: HYDE16
You must log in or register to reply here.
Share:
Facebook Twitter Reddit Pinterest Tumblr WhatsApp Email Share Link
Top