I got a BSH Throttle Pipe to upgrade my R, running at Stg 3 this is really a no brainer and needed to be done as the OEM pancake is a massive restriction. I had used the BSH on my GTI build and worked fine, I liked the design where it uses a threaded plug to block the DV/noise pipe outlet instead of the rubber cap design of the others. That was not a concern for the R but a good product is a good product. Man was I wrong.

When installing the BSH I had to fight it to get the IC outlet hose to reach and fit on the pipe at all, the pipe was no where near where the hose was. I had to have the wife reach down inside the engine bay and pull the pipe toward the front of the car so I could get the hose on it. Even then the hose could not cover much of the outlet and it felt like the clamp was on the rib of the pipe and not past it as it should have been. Sure enough, I got one block from my house, hit 5psi turning the corner and heard a loud POP and lost all power. Barely made it home and into the driveway and found, yup, the hose had blown off the pipe.

So I hit ECS again and looked at the other options and decided to order the Neuspeed mostly because of it having the correct mount bracket and partly because I figure if I trust them with my wheels and the rear brake rotors on the TTRS surely they designed a proper pipe. I paid for quicker shipping to get it before the next weekend when I had an appointment to get the APR tune transferred to me and new programs installed. It arrived and after I got home from work Friday night I set about taking the BSH off and installing the Neuspeed before my Saturday morning appointment. My loving wife got me two fancy new LED work lights since this would be an outside, after dark install. lol I decided I had to photo document the differences and my annoyance with such a simple product.


This photo (the BSH is on the top in the photo, Neuspeed is on the bottom) shows one of the major design differences, you can see the Neuspeed has a tighter bend and is much longer after the bend. This completely changes the location of this end of the pipe which has to connect tot he hose off the IC outlet. This is shown even clearer in the second photo with the Neuspeed laid on top of the BSH. You can also see the Neuspeed has the proper mount bracket where the BSH has nothing. 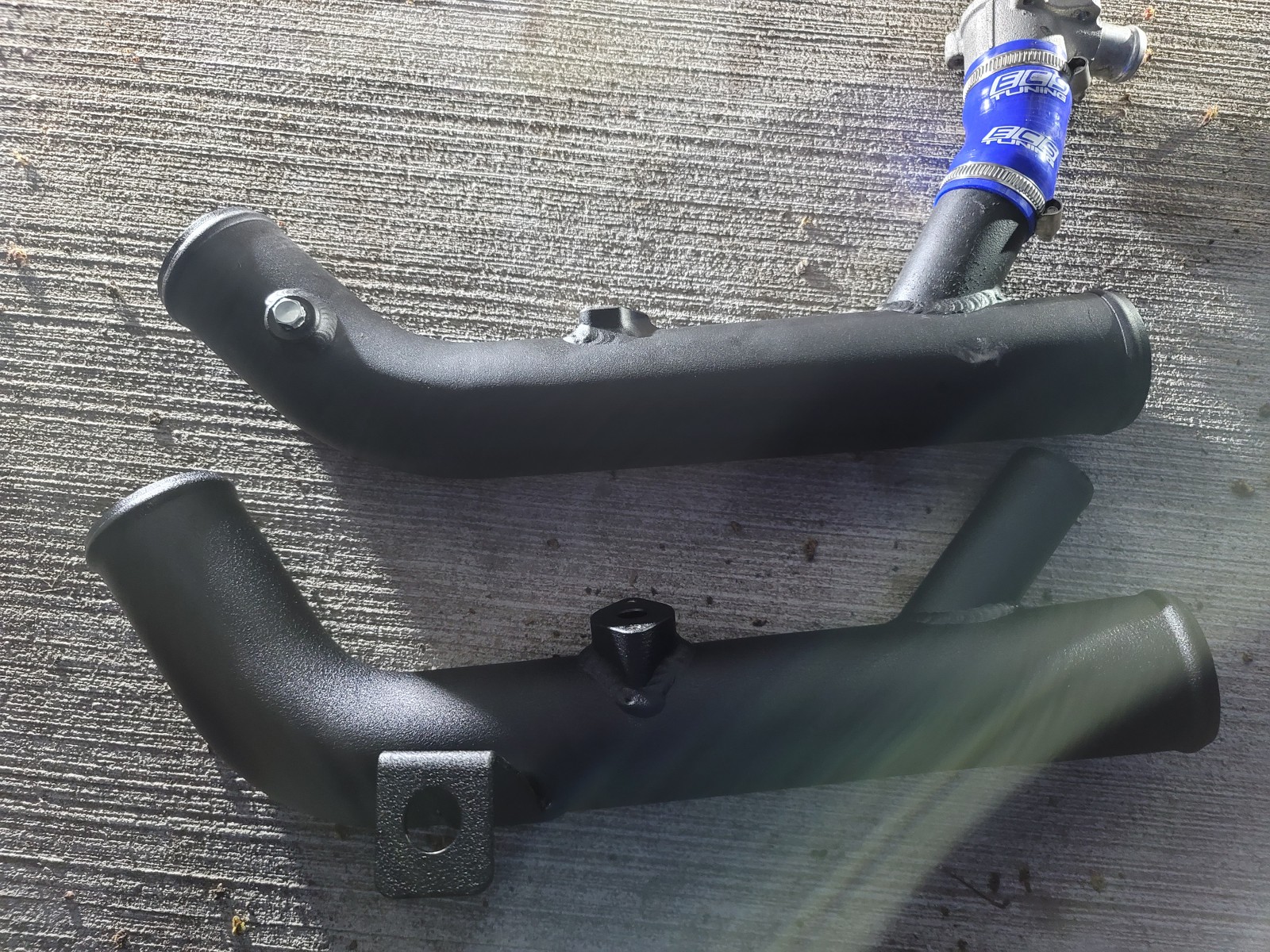 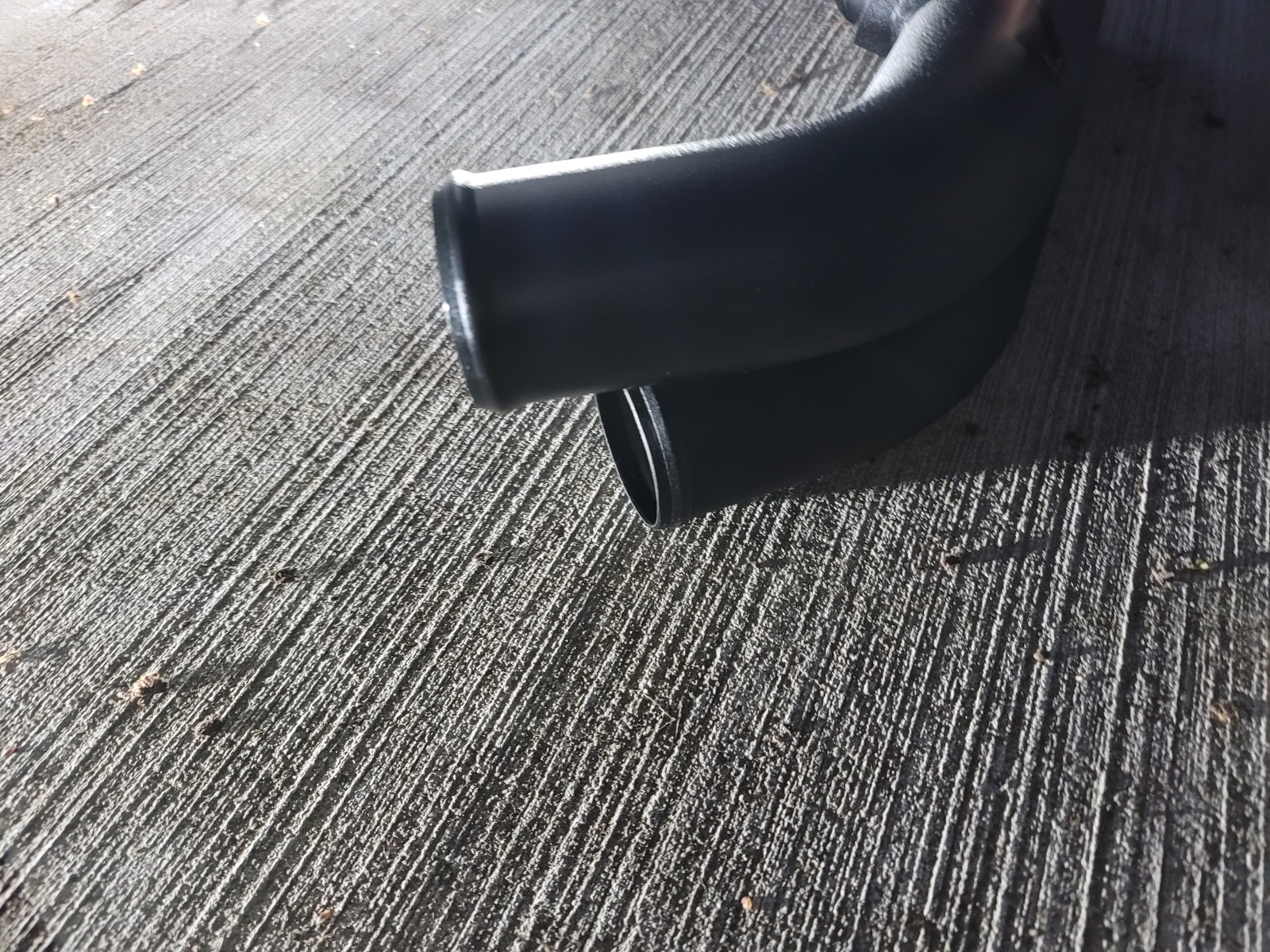 The design differences that really make you question how these cold both be designed for the same vehicle continue on the other end as well. The next photo has the Neuspeed on the left and BSH on the right. The Neuspeed has a bend angling the outlet to the TB where the BSH is just a straight pipe. This is also a major difference in the location of the pipe and inlet/outlets to connect to the hoses. 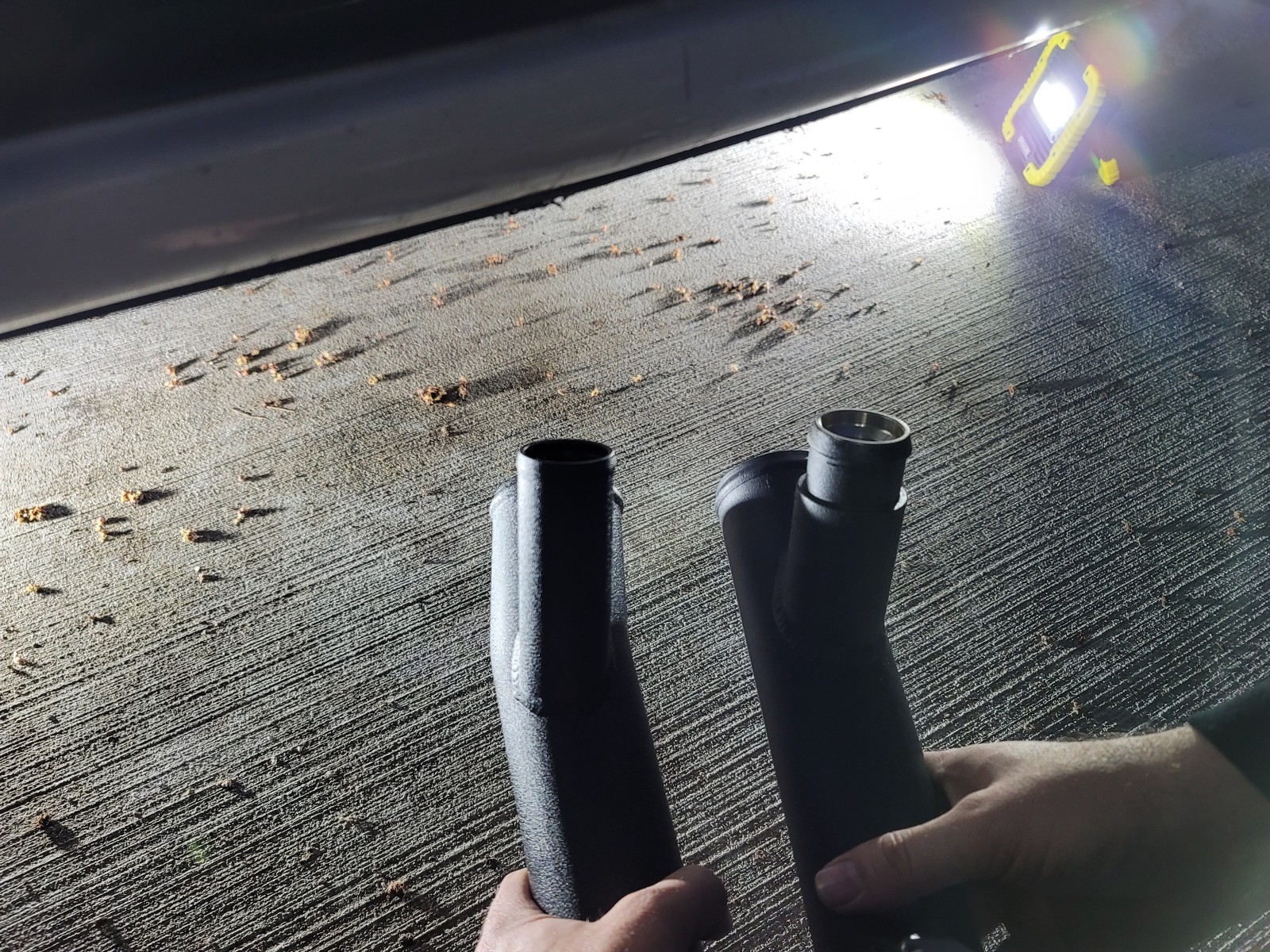 The Neuspeed needed no force to make it align with the hoses properly at all and had plenty of space to properly clamp the hose from the IC. Unfortunately this is not a completely happy conclusion with the perfect solution found.

Here is the first photo again, this time look at the location of the MAP sensor mount flange.

This difference causes the MAP sensor socket to contact and rub on the oil cooler. It was incredibly difficult to even get the sensor in (I couldn't get the socket to release the harness so I just left it plugged in and undid the screws) and after some adjustment I got it so it's just barely touching the oil cooler but I don't want it rubbing on it. I had to leave it for now as it was 9:45 and I had worked 9 hours that day (and I have a nearly 2 hour commute on top) so I left it and will go back and try to adjust to get more clearance.

Sadly, there's a couple more issues that make the Neuspeed the better choice not because it is better, but only because the BSH is so bad. This is the quality of the assembly of the Neuspeed. 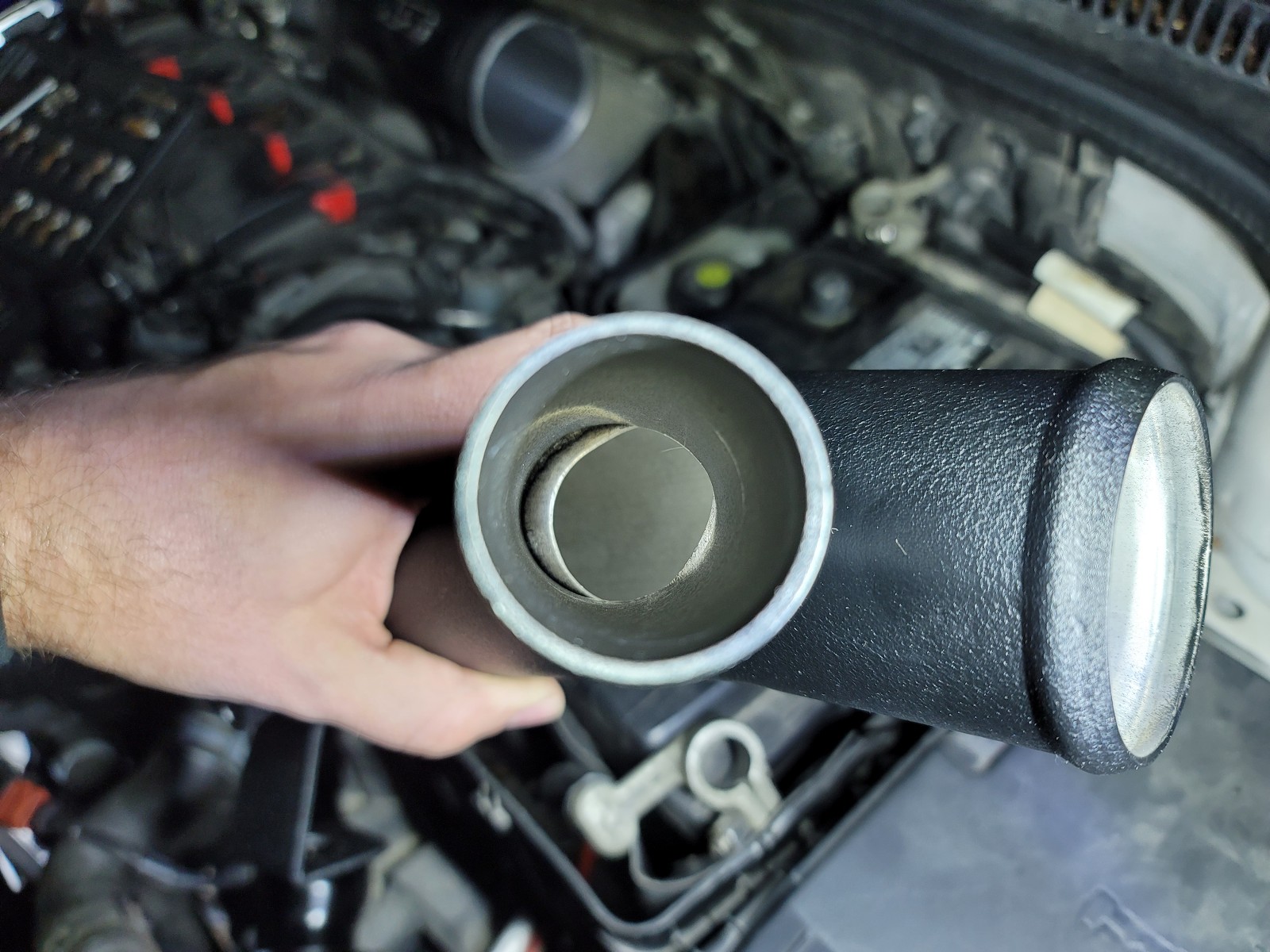 This is the way the outlet for the DV is attached. I have nothing against the blind, I am sure they are great people but I really don't want them to be responsible for assembling products. I know the airflow is going out of this section not in, but this will still cause turbulence in the airflow continuing to the TB and is just shoddy.

The last two issues are minor but worth mentioning. The bolt they send to attach the mount bracket is not big enough to securely hold the bracket properly against the engine, it needs a washer. And finally they do not give you a new hose to attach the pipe to the TB. In my case my factory hose was in bad shape and I thought was causing a boost leak as it was curling at the top so re-using it was not a choice. Right now I am still using the one that DID come with the BSH while I wait to see if I can get the MAP adjusted or if I have to order a THIRD vendor's offering and see how it is. USP sells one from Spulen which looks to be designed with the same bends as the Neuspeed and has the bracket but the MAP mount location does look like it is in a different spot (and it comes with a new hose for the TB) so we shall see.

In conclusion I will say ECS does not list the BSH for the R if you search in their categories, I found it by just manually searching for it because as mentioned I had used it on the GTI and wanted to go with what I knew, but it DOES list it as being a proper fit for the MK6 R. It clearly is NOT unless I somehow got a reject that was missed in QC and not manufactured right. It seems like this is where there are clear differences between the FSI and TSI, or that manufacturing error possibility. I'm not ordering another one to find out, I will just say based on my experience no one should bother ordering one for their MK6 R, it is terrible. The Neuspeed is a much better designed product and clearly appears engineered specifically for this platform, but falls short from failures in little things and small issues that should have been addressed. If I end up ordering the Spulen from USP I'll update this thread with that adventure. LOL
2012 Golf R CW 2DR "The Defiant" BUILD THREAD | APR Stg 3 | Bilstein PSS10 | Haldex Comp Controller | Southbend Stg 3 Endurance | APR Short shift kit | BFI Stg 2 Motor Mounts (DO IT!) | Ceika 2-piece slotted rotors | G-Loc G16 pads | APR Ignition Coils
2018 Audi TT-RS | Audi Exclusive Mexico Blue | Black Optics/Sport Pack | Tech Pack - APR Stg 1 E85 (Plaid mode lol) | Girodisc front rotors R12 pads w/Neuspeed 350mm rears R10 pads
2014 Touareg TDI R-Line | White | Paddle shift mod | Cayenne TCU coding | Adam's High Carbon (Double)Slotted rotors w/ HAWK pads | afe Pro 5R filter
1983 Porsche 944 | Sienna Red Metallic | Stock

You had better luck with the Neuspeed pipe than I did, I couldn't get it to fit my R, no matter how I tried it contacted the fan. I have a Unitronic intercooler and I thought maybe that was the issue. I cut bait and sold it and I just run the stock pipe.

Yeah, the Neuspeed fits fine, no where near the radiator fans, I'm running the APR intercooler. The BSH was pressed up against them hard, that's why I had the wife push it back so the hose would go on and keep it away.

Seems like they all have their issues. I tried the CTS pipe and it was as ill-fitting as a part could be. The mounting bracket didn't line up with anything, and they didn't even include a correctly sized coupler - it was a standard cut-to-fit elbow that required a lot of trial and error to get cut right.

On top of that, the boost pipes didn't make any noticeable difference. If someone with access to a flow bench sees this, I'd happily donate to a comparison test of these pipes vs stock in the interest of proving they aren't actually an improvement over stock (at least, not enough to be worthwhile at the power levels these engines are capable of).
You must log in or register to reply here.
Share:
Facebook Twitter Reddit Pinterest Tumblr WhatsApp Email Share Link
Top