Got my new tires mounted onto my new wheels today and got them on the car. It's gonna look a bit goofy until I get some coilovers and most likely pull the fenders. I love the look of the wheels though and how meaty the tires are. 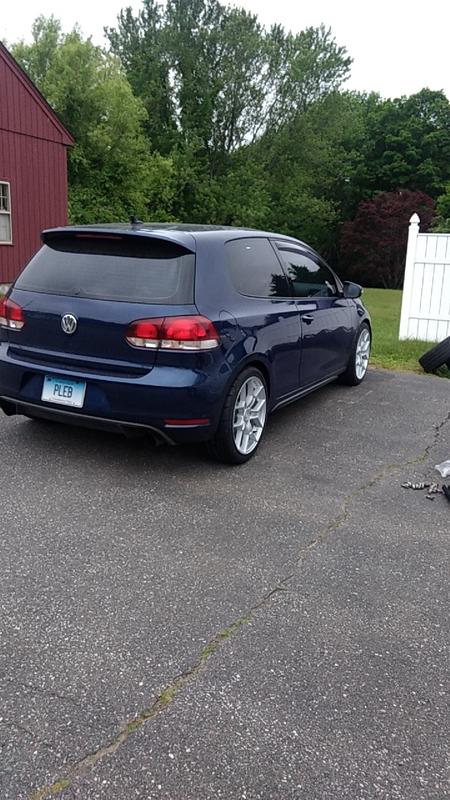 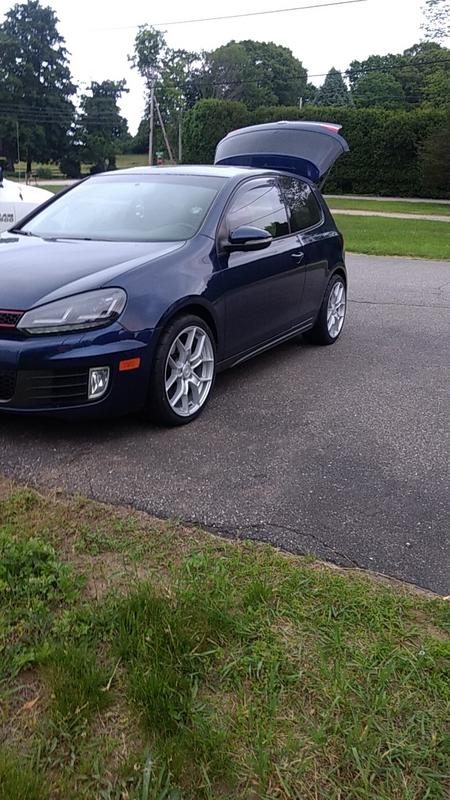 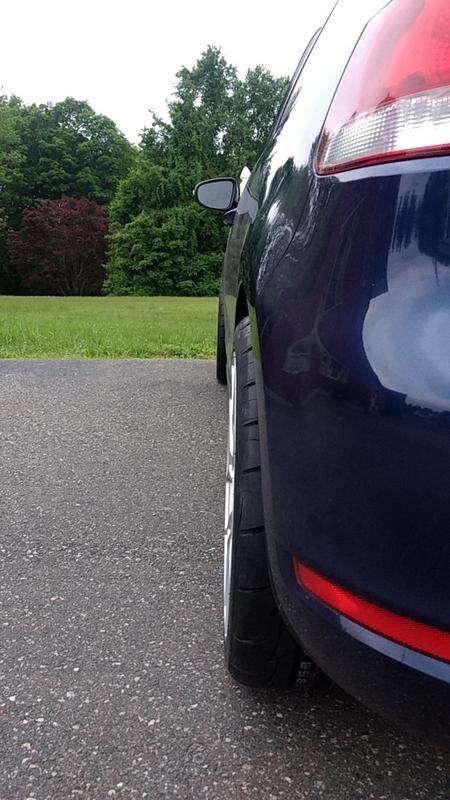 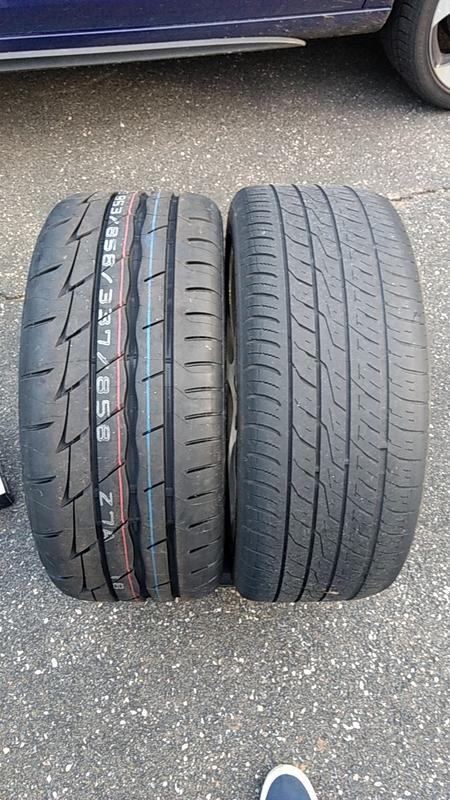 Just picked my car up from the shop yesterday after having SB Stage 2 Endurance clutch kit, Peloquin LSD, steel shift forks, iAbed billet rms, and stainless steel clutch line put in. Pedal definitely feels much stiffer, although it could break in in the next coming week as I commute to work. Feels good though and definitely rewards correct shifting with smooth engagements. Just waiting for this break in period to be over so I can actually drive my car again like I haven't been able to do for the past month while the clutch was slipping.
<<<Build Thread>>> <<<IG>>> Major Parts: 3" 42DD TBE | IE Intake | Stratified E30 Tune | IE Intercooler | Brembo 18z BBK | Indy 500s 255/35/18 | Motegi Racing MR-133 18x8.5et45 | SB Stage 2 Endurance | Peloquin LSD | Turbosmart Plumb Back DV | Unitronic DV Relocate | Red Top Coils | VWR Engine/Transmission Mounts | HPA 75a Puck | YCW Aeris Series Coilovers

Finally got around to getting the stud conversion done on my car. Love the way they look and definitely prefer them to trying to hold the wheel on the hub while getting the first 2 lugs in. 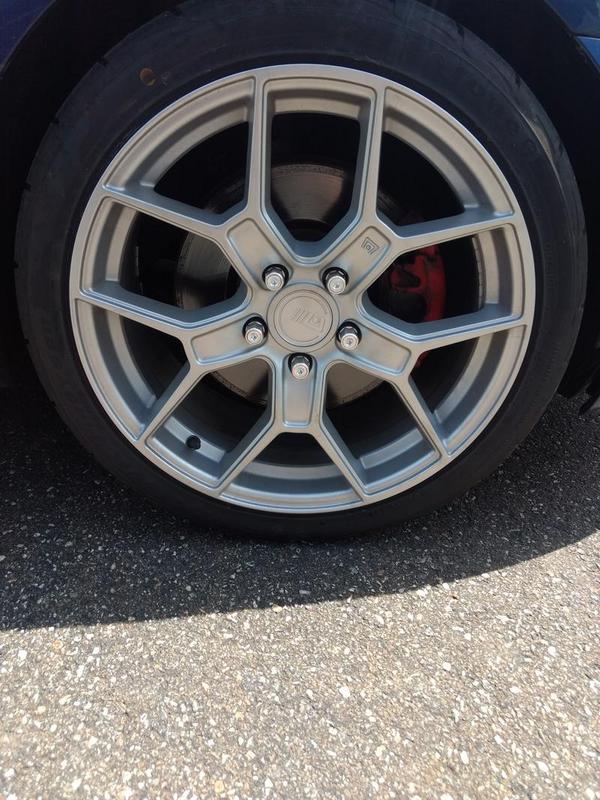 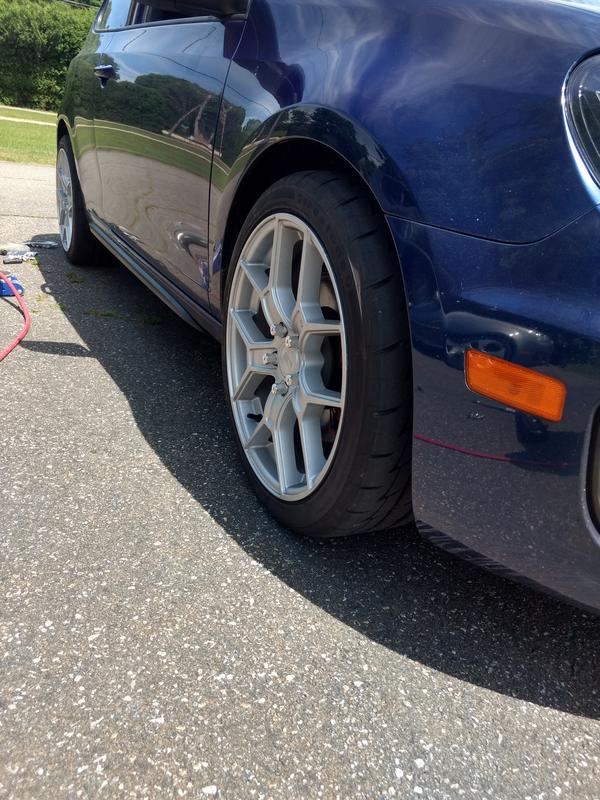 Got my TOP installed this weekend. Getting the old one off and the new one on was really straight forwards, just two clips, two bolts, and a hose clamp. The new one doesn't line up right though which is annoying, was in a rush though so I wasn't able to mess with it too much. For now it's just sitting as picture, the connections feel really sturdy so i'm not worried about it going anywhere. I'll probably try forcing the top hose on some more some time this week, which should line up the holes.

Went to install the 42dd shifter endlink and bracket bushings yesterday but ended up not having the right tools to finish the job. Got the front-back endlink installed in about 2 minutes but didnt have a drill or saw for the side to side one. Also didnt have a deep 13mm socket for the nut on the cable bracket. Just getting the front-back one in though now makes the side-side feel like shit because it just feels so good. Hopefully getting them in sometime this week or weekend along with my charge pipe and DV relocate.
<<<Build Thread>>> <<<IG>>> Major Parts: 3" 42DD TBE | IE Intake | Stratified E30 Tune | IE Intercooler | Brembo 18z BBK | Indy 500s 255/35/18 | Motegi Racing MR-133 18x8.5et45 | SB Stage 2 Endurance | Peloquin LSD | Turbosmart Plumb Back DV | Unitronic DV Relocate | Red Top Coils | VWR Engine/Transmission Mounts | HPA 75a Puck | YCW Aeris Series Coilovers

Finally got around to getting my DV relocate installed. Wanted to do the charge pipe as well but the one I got didn't come with screws for the MAP sensor and the screws for the stock charge pipe are a totally different thread. Once I get the screws though it should only take 30 min tops to change out, only 2 hose clamps and two torx screws. I'm feeling a bit of a stutter in the boost right when im about to peak, could be because I didn't have any fresh oil to put around the DV+ so it wasn't sliding as smoothly as it should. I'm gonna put some on tomorrow now that it's easy to get to.
<<<Build Thread>>> <<<IG>>> Major Parts: 3" 42DD TBE | IE Intake | Stratified E30 Tune | IE Intercooler | Brembo 18z BBK | Indy 500s 255/35/18 | Motegi Racing MR-133 18x8.5et45 | SB Stage 2 Endurance | Peloquin LSD | Turbosmart Plumb Back DV | Unitronic DV Relocate | Red Top Coils | VWR Engine/Transmission Mounts | HPA 75a Puck | YCW Aeris Series Coilovers

Just finished the 42dd endlink and bracket bushing install. Have to say I didn't feel much of a difference with the side-to-side end link and metal bracket bushings. I haven't actually driven the car yet but running through the gears with it off didn't feel different. The end links are still worth it just for the front to back stiffness. Only way I could see the bracket bushings being worth it is if a metal bracket was installed also, since putting metal bushings in will probably just cause the plastic to flex where the rubber was before.
<<<Build Thread>>> <<<IG>>> Major Parts: 3" 42DD TBE | IE Intake | Stratified E30 Tune | IE Intercooler | Brembo 18z BBK | Indy 500s 255/35/18 | Motegi Racing MR-133 18x8.5et45 | SB Stage 2 Endurance | Peloquin LSD | Turbosmart Plumb Back DV | Unitronic DV Relocate | Red Top Coils | VWR Engine/Transmission Mounts | HPA 75a Puck | YCW Aeris Series Coilovers

Jut got my Turbosmart Kompact EM Plumb Back diverter valve in. The quality of it seems really good from just holding it. From my understanding, it only fits with a DV relocate which made the install super easy. I took a test drive and it holds boost just like my DV+ did which is no surprise. I'm not expecting to notice much with the stock turbo but I heard it really shines once more boost is added. 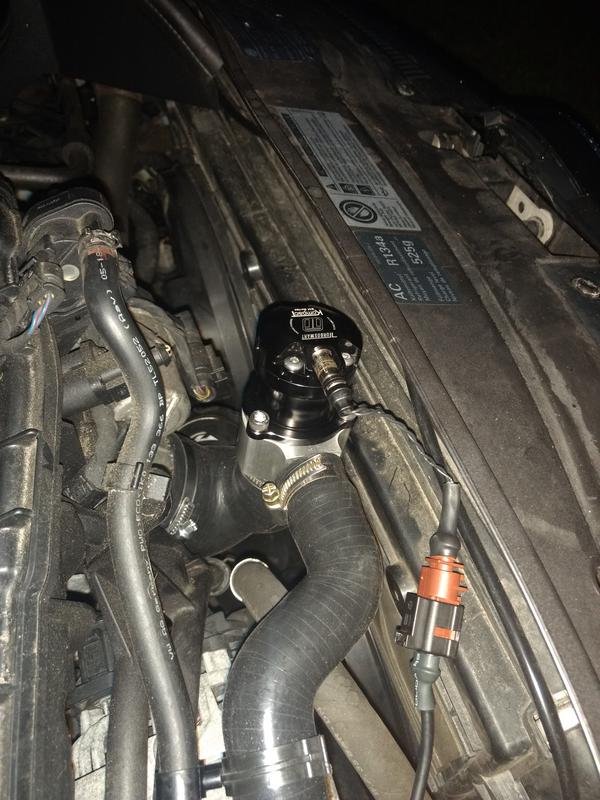 Just installed the CTS Turbo turbo muffler delete and I gotta say i'm not too impressed with the CTS kit. Due to the size of the new outlet portion of the turbo, the N75 valve has to be shifted away from it to have the hose fit on. They include a small bracket to do this with 4 holes. Two in the stock location, two shifted diagonally away from the turbo outlet. Aside from it being a pain to get the bolts in the holes on the turbo, the top holes were too small, and not threaded, and there was no hardware such as nuts to secure the valve to the bracket. I ended up just using the smaller vacuum line they gave to hold the valve in place. Doesn't seem like it will be going anywhere and i'm really not concerned since I plan on getting a different turbo down the road. Just would have been nice to have a bracket actually work. I also had to re-use the original O-ring since the "included" one wasn't actually included. The main reason I installed this was to get better fitment on my TOP which didn't line up with either of the bolt holes on the engine. I was able to get one of them to line up so while not perfect, it is definitely secure on there. I have yet to drive the car since putting it on but i'm really not expecting any performance difference from it. I definitely wouldn't recommend anyone getting this from a pure performance standpoint. While the install wasn't really difficult, it was definitely frustrating enough where I wouldn't do it again even for a slight performance increase, which again I doubt this will give.
<<<Build Thread>>> <<<IG>>> Major Parts: 3" 42DD TBE | IE Intake | Stratified E30 Tune | IE Intercooler | Brembo 18z BBK | Indy 500s 255/35/18 | Motegi Racing MR-133 18x8.5et45 | SB Stage 2 Endurance | Peloquin LSD | Turbosmart Plumb Back DV | Unitronic DV Relocate | Red Top Coils | VWR Engine/Transmission Mounts | HPA 75a Puck | YCW Aeris Series Coilovers

Finally got finished painting my rear valance and diffuser. I can't stand the faded black plastic that comes on the car so I bought a new valance (only because on exhaust tip melted the old one) and rattle canned it gloss black, along with the diffuser I picked up from someone on the BurnAllTheMk6 FB group. I did 2 coats of primer and 3 coats of black on the valance and 3 coats of black on the diffuser. I also found out the hard way that putting gloss clear coat on gloss black paint actually makes it duller instead of glossier :iono:. The valance itself looks so much better in gloss black. When I was painting the diffuser though, the humidity warped the pieces pretty badly so it looks a bit uneven right now. It was getting dark last night as I was doing it but I plan on taking the diffuser off sometime soon and finding a way to flatten all the pieces back out so they line up nicely. 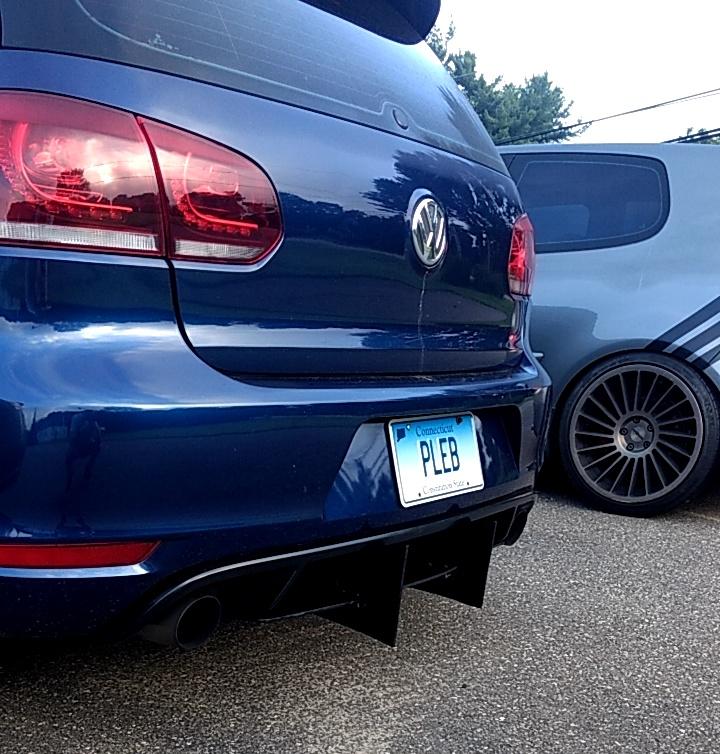 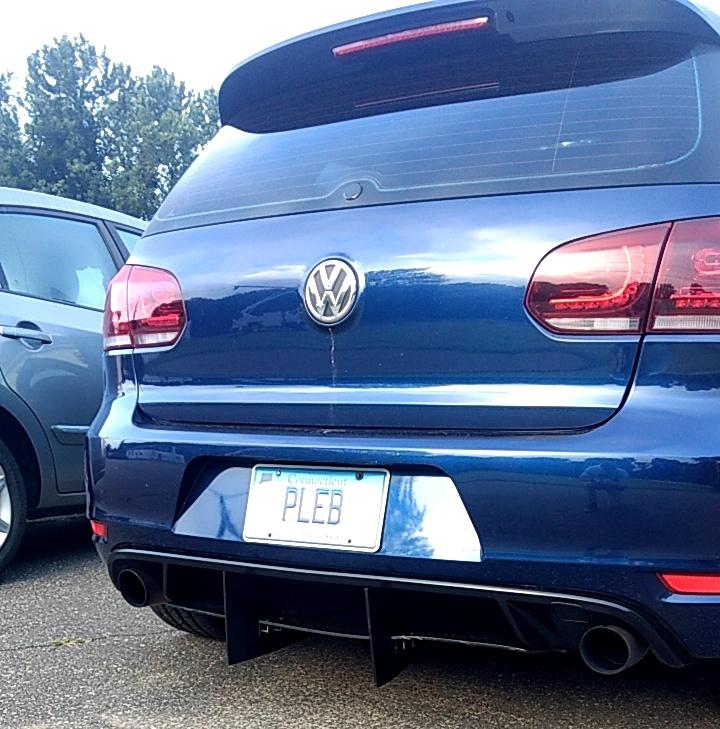 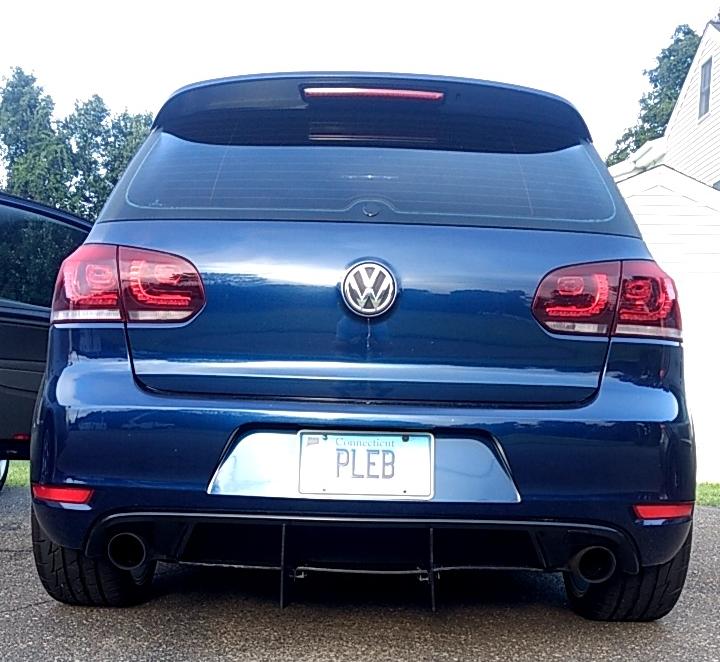 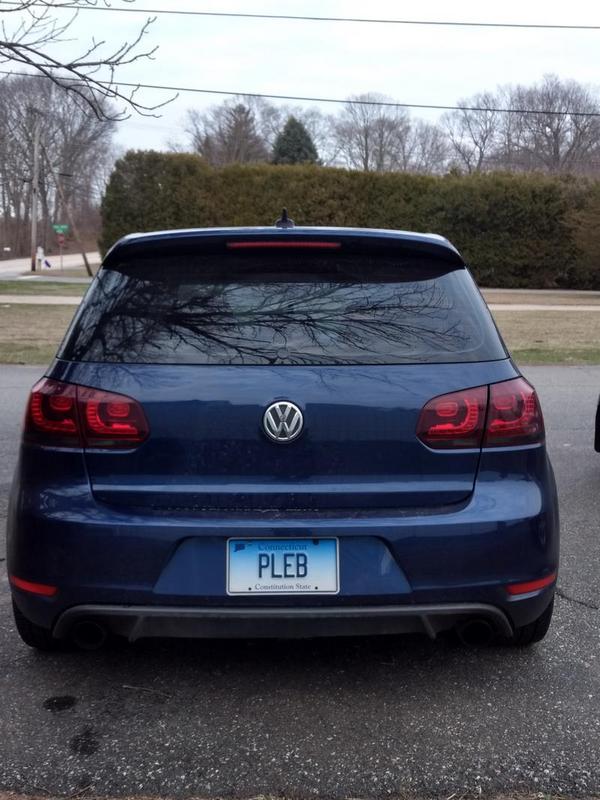 Just finished doing the timing chains since I was at -4.55 degrees in block 93. Overall the job wasn't that bad. Woulda been able to wrap it up in 2 days but I broke the oil chain tensioner when taking it off so I had to wait 2 days to get it from the dealer. I also tossed the fluidampr I just picked up on there since the pulley was off, and the engine does feel much smoother than it did before. I gotta do a carbon cleaning soon, so hopefully that will help to smooth things out a bit more since i'm still getting a small surge in 1st-3rd around 2800, could just be the tune though.

Just installed the OEM front lip I picked up cheap on one of the facebook groups. Came already painted Shadow Blue as well so I just had to clip it in. It's subtle but I love how it fills in the huge gap VW left without it. Also installed the wastegate clip that seemed to have fixed the clicking noise on decel. 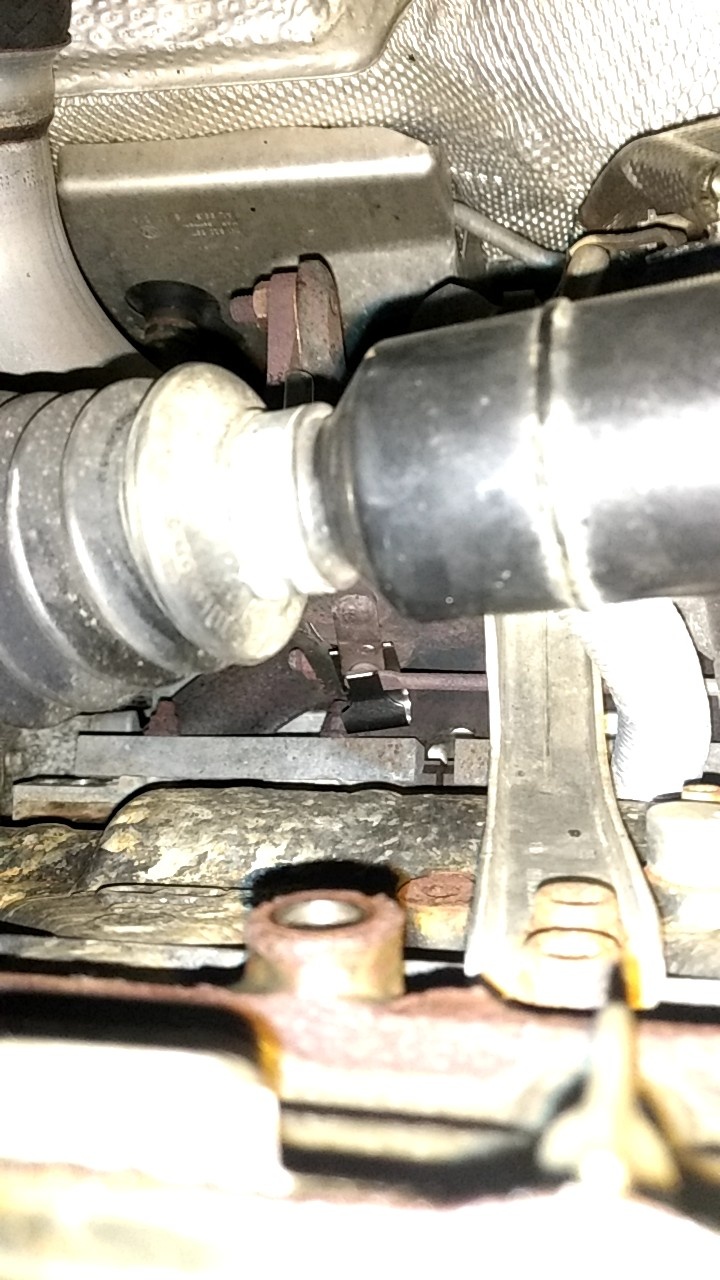 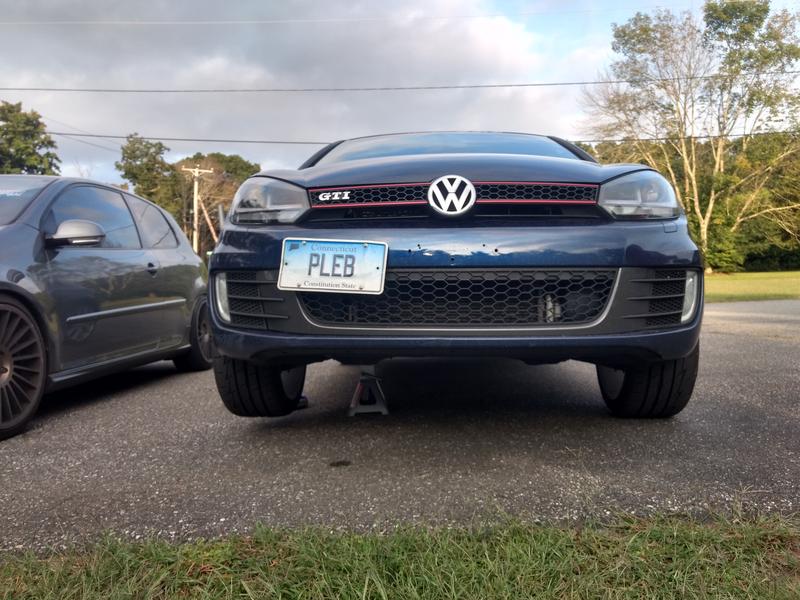 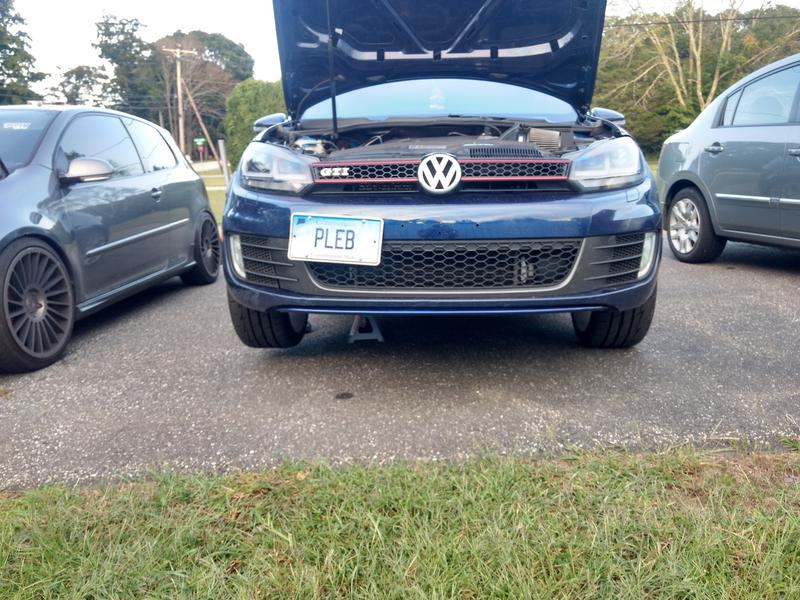 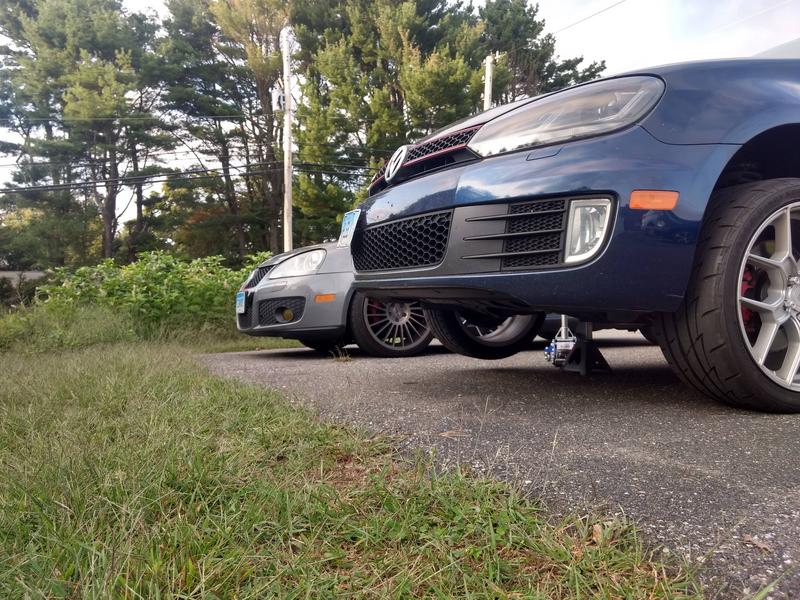 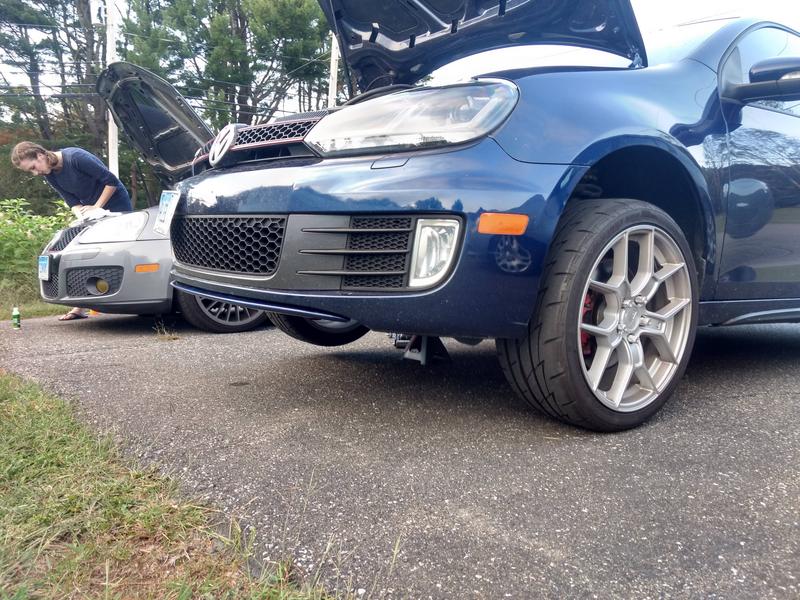 Got my IE intercooler installed last night. Once I figured out which bolts actually needed to come out it wasn't that bad of a job. I had to trim some plastic off of the two passenger side holes on the radiator that bolted to the intercooler and enlarge one of the holes on the AC condenser bracket that attached it to the intercooler. The IE intercooler is definitely much better quality than the OEM one, and also has much more volume. Only downside would be it's at least 2x as heavy as the OEM one. The only issue I had was the adapter piece that connects to turbo outlet pipe to the inlet hose was too small so now I have a massive boost leak and make no power at all. I emailed IE so hopefully I can get one in this week then get a pro-tune next week to make the most of what I have. 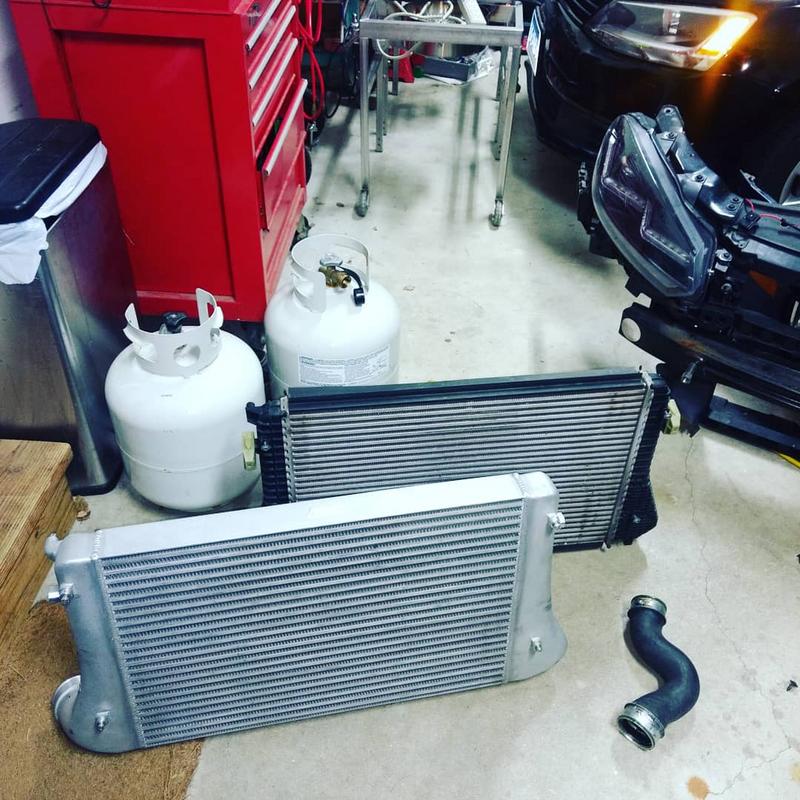 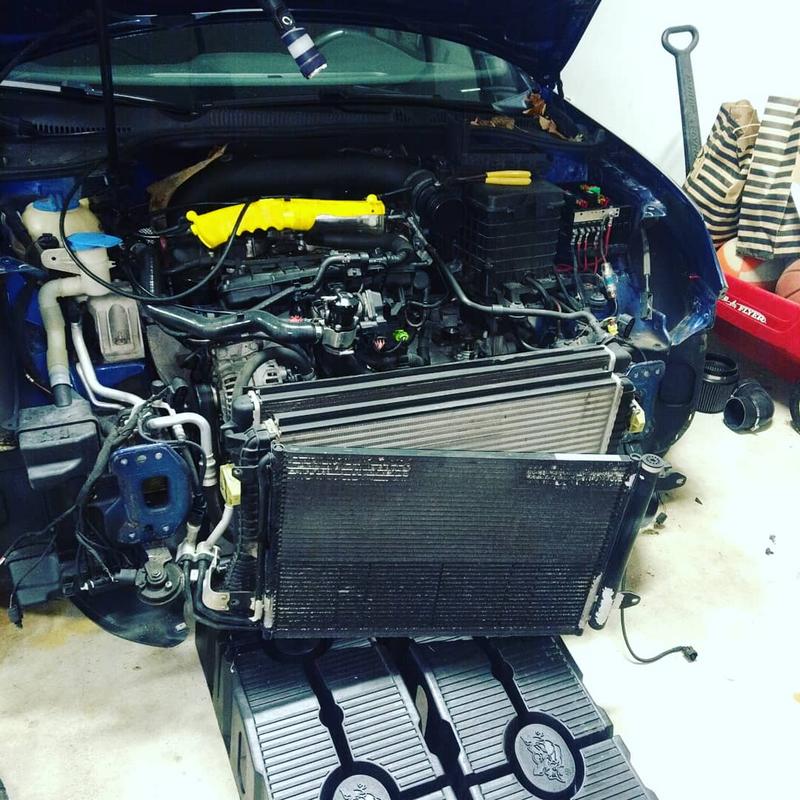 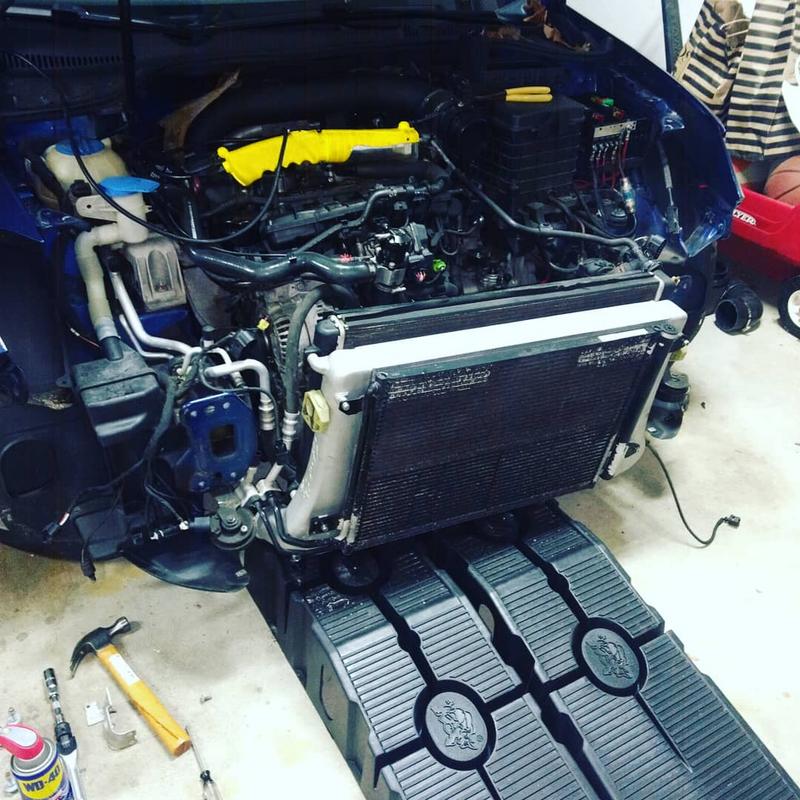 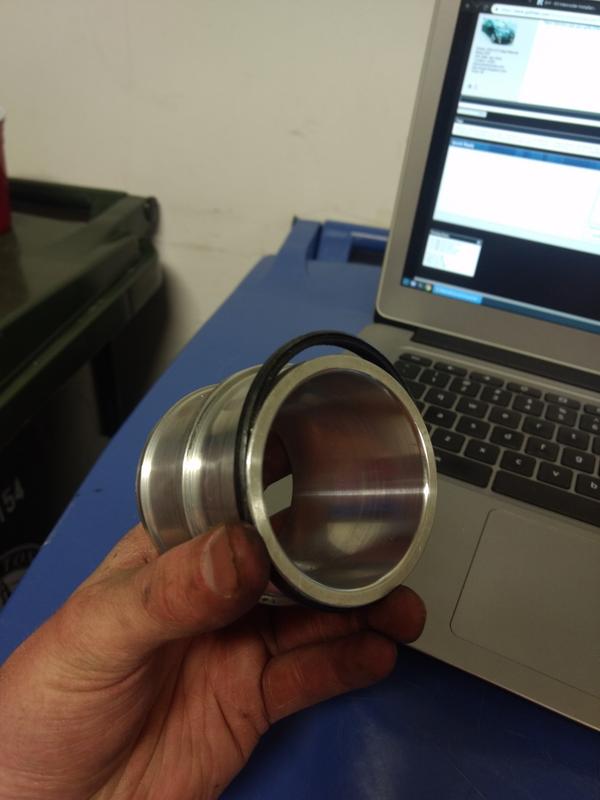 why dont u wait till u have ur big turbo to get the protune? why waste money on a protune for a k03

franco516 said:
why dont u wait till u have ur big turbo to get the protune? why waste money on a protune for a k03
Click to expand...

Its gonna be a good while until I go big turbo (probably at least a year or two), and thats if nothing else comes up while i'm saving and i'd rather just get the most out of what my car can do as is, which the Cobb stage 2 definitely isn't doing.
<<<Build Thread>>> <<<IG>>> Major Parts: 3" 42DD TBE | IE Intake | Stratified E30 Tune | IE Intercooler | Brembo 18z BBK | Indy 500s 255/35/18 | Motegi Racing MR-133 18x8.5et45 | SB Stage 2 Endurance | Peloquin LSD | Turbosmart Plumb Back DV | Unitronic DV Relocate | Red Top Coils | VWR Engine/Transmission Mounts | HPA 75a Puck | YCW Aeris Series Coilovers
You must log in or register to reply here.
Share:
Facebook Twitter Reddit Pinterest Tumblr WhatsApp Email Link
Top