brat_burner said:
Lol I hate those
Click to expand... Driving today I encountered this guy. All I could say way CSB

Driving today I encountered this guy. All I could say way CSB

MK7 R behind me wanted to play. Did a gentle launch from the light and rolled through 2nd into 3rd before giving it the beans. He was on my ass until I hit 3rd. Left him in a hurry and started to put cars between us. I’m sure he wasn’t expecting that so he wasn’t ready. Now if he was in front I would have been playing catch-up with that AWD dig traction.
13 GTI Base Coupe 6MT//Unitronic Stage 2+ K04//CTS 3" Downpipe//GFB DV+//IE Intake//ST Coilovers//O.Z. Superturismo LM //Neuspeed Insert//APR Pendulum Mount//BFI Stage 1 Mounts//SuperPro ALK//CTS Subframe Kit//New South Gauge//Resonator Delete //Plaid Shift Boot//Klii Inlay//DEPO LED Tails//HPA Short Shifter//DIY RSR Clutch

BUILD THREAD
The TDI Wagon
A

This happened, had to test it

Just merged onto the highway and after a min or so I see a SUV coming up fast behind me. It’s a Range Rover. He swoops in front of me and I see Sport snd Supercharged on the back

. He gets on the brakes a bit and I can see this ear to ear grin in the side mirror of what looked to be a kid. He is slowing down and speeding up. I’m like okay kiddo, so I drop it to 5th snd get over to the right lane. I come up next to him kinda easy and he hammers down. I hear a sweet supercharger whine and then I’m like by by and put a bus or 2 on him. He stayed a bit back after that. Next time look for a stock GTI

It’s been a Rubaru few days.

Kiddo in a still t-tagged STI hatchback (2008ish) was at a light in the left lane little brother or friend in the passenger seat. I creeped by him in the right hand lane as the light was red. He started revving his engine and making BOV noises. We go on down the road and he is revving and trying to get my attention. The road opens up out of town into a highway im behind him at this point. He takes off and I’m on his tail in 3rd. He isn’t moving fast enough so I go over a lane and fly by him as I go into 4th. I slow it down and he comes up for more. Okay, I wait for him to hit and then let him have it again. He sorta hangs on through 3rd gear but once I shift into 4th it’s bus time

Today 2015ish WRX wanted to play while I came up behind him on a back road. Had a snap crackle tune it sounded like and I’m sure a COBB tune as those come stock it seems. Had meaty tires with white lettering on them

. He downshifts and takes off once the road straightens up. We are about even through 3rd gear then once I get into 4th I start gaining fast. Had to back off as I couldn’t pass. He tries again same result. Tried a 3rd time and he realized he is holding me back so he lets me pass.

Had a go with a new Mustang GT

. Back road I was behind him it still had t-tags. I was keeping up (he was still pulling ahead) from a 3rd gear pull into 4th and then at about the top of 4th I heard him shift up and he was fucking gone like I wasn’t even on the gas 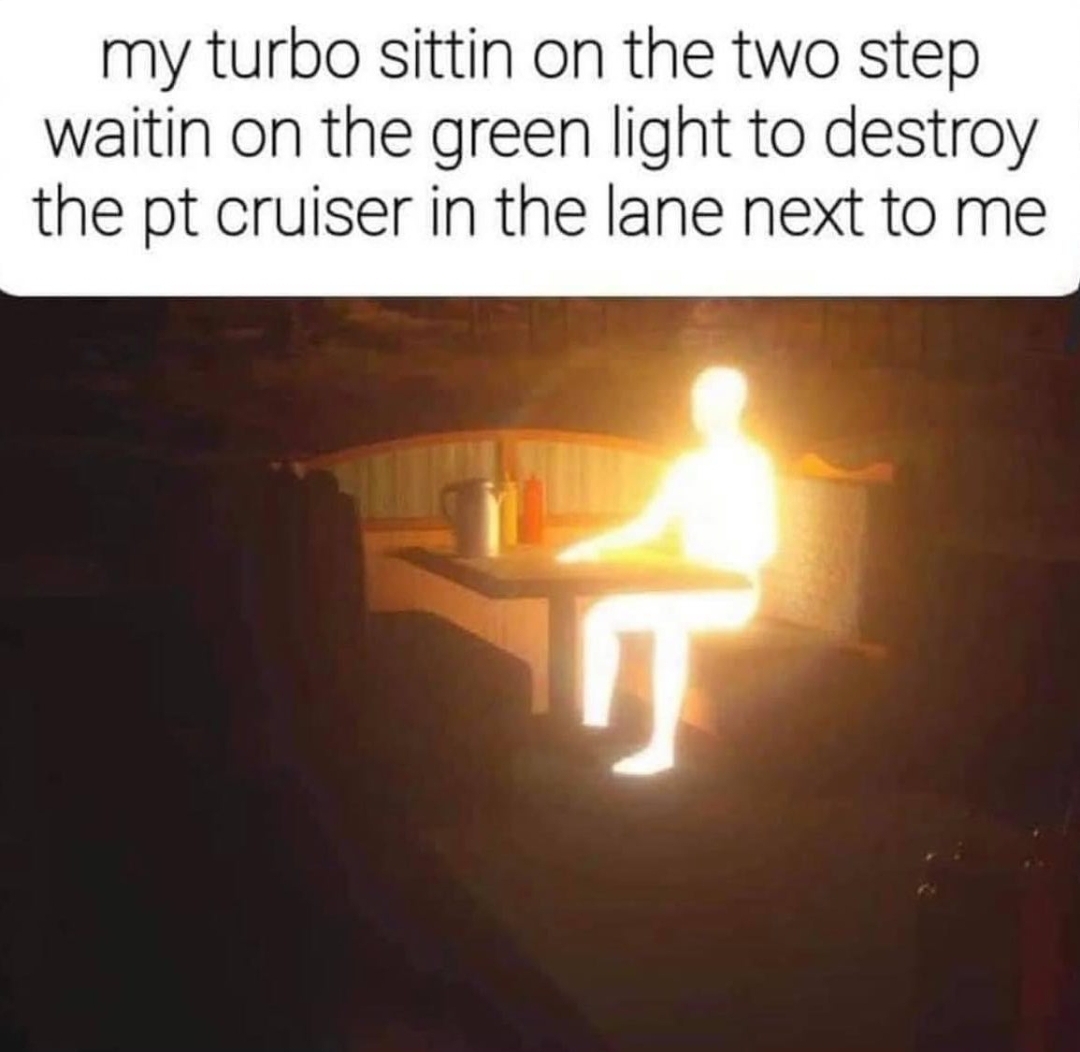 Guy I used to work with just got a 2013ish RS5 coupe. He always had Mercedes and recently an M5 BMW. He got rid of the BMW cause it was constantly in the shop. When he got the Audi I told him he finally picked the superior German manufacturer which he thought was funny cause I’v been telling him to get an Audi 2 cars ago. His M5 was tuned to like 600+HP and his Merc was an AMG 63(?) or something that when he started it could wake the dead.

Anyway we happen to be pulling out of someplace at the same time and he wanted to do some pulls to see how he would stack up against the k04. First time he started behind me from a 2nd gear roll while merging onto a bypass. I missed 3rd so he had to back off then once I caught 3rd he was off the gas so I pulled ahead. Once off the bypass and onto the highway we lined up around 40 mph and rolled. I let him take the hit and I jumped ahead about a car. Shifted into 4th and he closed the gap some but then I started pulling away once in 4th. Got almost to the top of 4th and started coming up on cars so slowed it down. We parted ways at the next light but he was impressed by the little GTI. He said I wasn’t catching you, that thing moves!! I said yours sounds way better (that Audi V8 with res delete and x-pipe

BUILD THREAD
The TDI Wagon
B

All the locals fear the GTIzzle man 🏎

Really tho I don’t daily the GTI anymore so a lot less chances of CSB’s. I have had a few runs with RT Mopars of the Charger/Challenger variety but nothing CSB worthy. I am off tomorrow and plan on taking the GTI (if it doesn’t rain) for a nice drive. I’ll see what I can find. Lately the beach traffic on the highways has been crazy. More so then most years which I think is because of Covid.

Went for a 2 hour drive up north since that’s where most of the people are. Drove thru Universiy of DE campus, no CSB’s

BUILD THREAD
The TDI Wagon
A

GolNat said:
Went for a 2 hour drive up north since that’s where most of the people are. Drove thru Universiy of DE campus, no CSB’s

. If no rain tomorrow I’ll go for another drive. Maybe head south instead.
Click to expand...