After 5 years out of the MK6 platform I am back. I had a 2012 4dr GTI I bought new and built into a Stg 2 trackday runabout, after 3 years with it I moved to CO and wanted to upgrade to AWD. The '15 Rs were all ordered up and my dealer made me a stupid good deal on a S3 but it just didn't scratch the hatchback itch, and then dreams for an RS3 Sportback were dashed by AoA. The TT-RS is a ridiculous force to be reckoned with on the track but I realized I did not want to move into the TT and race classes ripping out the interior for roll cage and weight.

After searching for months, dedicated that I wanted a 2dr and preferring White or Red and finding only blue or black I found the perfect match on Vortex with Stg 3 and supporting mods already done, only 51k miles for only $18,300. Has some minor issues (dent the size of a quarter on the passenger quarter panel in front of the tail light, scrapes on front bumper cover underside, and DRLs don't work even with coding turned back on) but still a great deal. Picked it up a few moths back but right after I ripped the calf muscle in my right leg off the bone, clearly not driving it or doing any work for a bit. lol Now that I am healed the projects begin!!!

Currently it's my daily driver commute car as I work my way up track classes and slowly gets built into a full race car. Got the Blackstone oil analysis back a couple weeks back and no warning signs of internals wearing poorly or any issues.


Mods completed since purchase (with links);


Just completed the shifter upgrade this weekend and took her out for a test, I had a DieselGeek on the GTI and loved it but wanted something even more capable and the VF had to go. The APR kit is incredible, I went with all the weights and it literally will notch into the gate by itself with just a light touch. I got a weighted BFI knob as well I need to install that I am hoping will complete the shift feel I want, after years with blink of the eye DSG shifts going back to the manual feels achingly slow.


After I bought it and added the yellow Laminx. 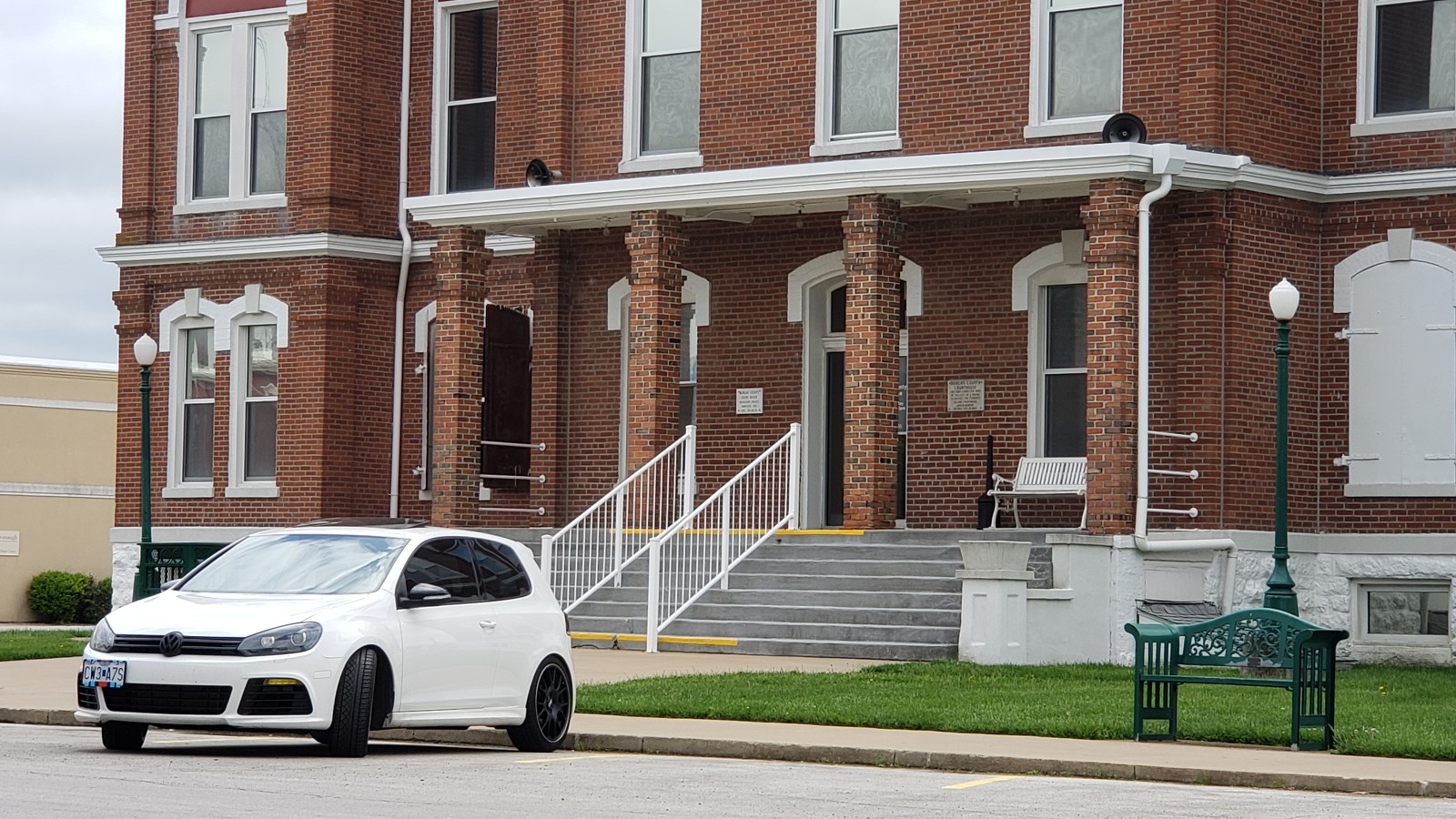 Here's how she sits today 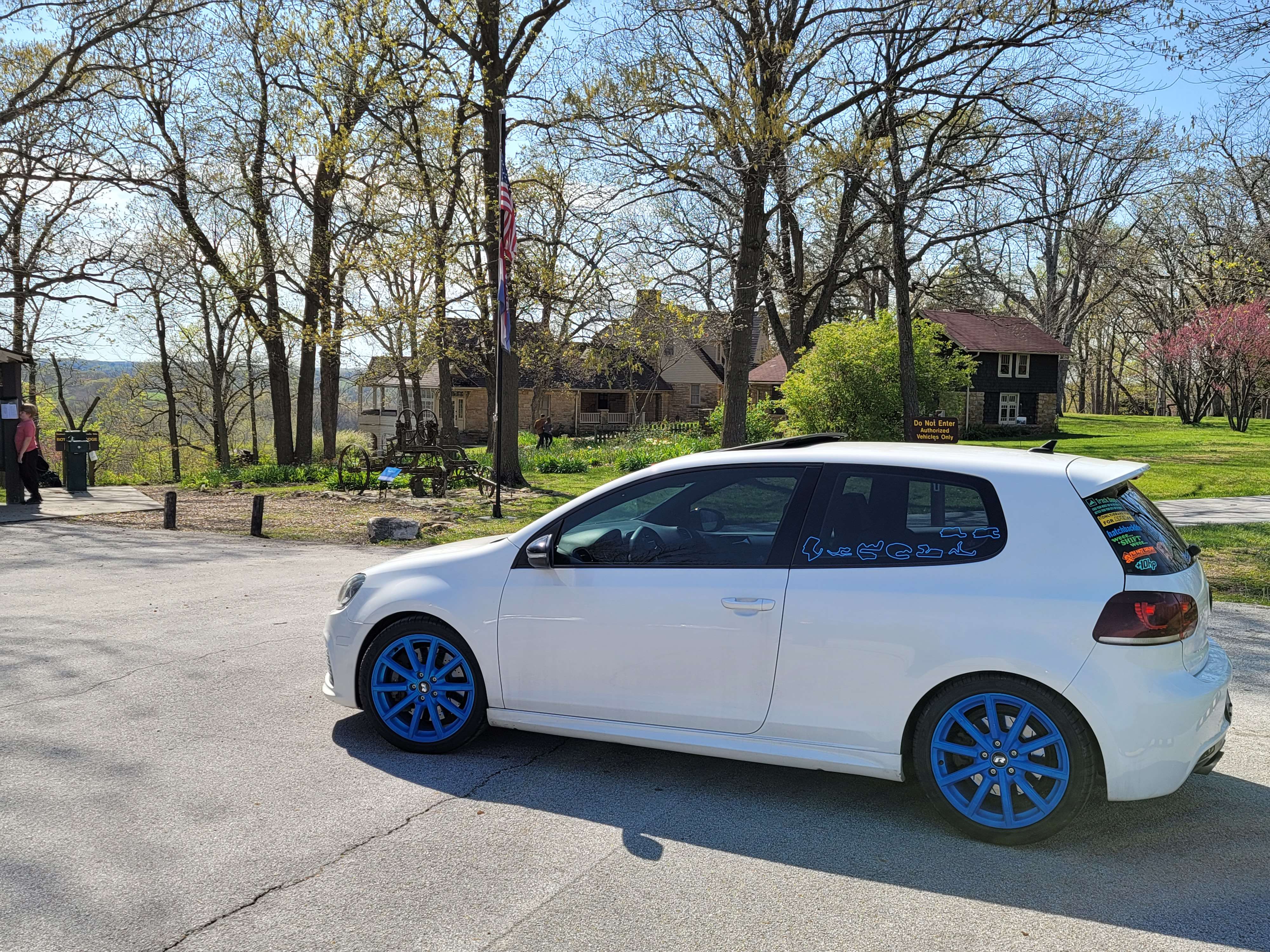 New tune and WMI up next.

Definitely on the list but not anytime soon, form < function you know.

So, got back from the first track outing in the R this weekend, my weekend ended early due to some issues with the event management and some issues with the car. Didn't even go out for my last session, but hey came home shiny side up so that's something. Considering an instructors son put their race prepped Audi A4 Avant into a wall backwards on lap 2 of session 1, guess I can't complain much. 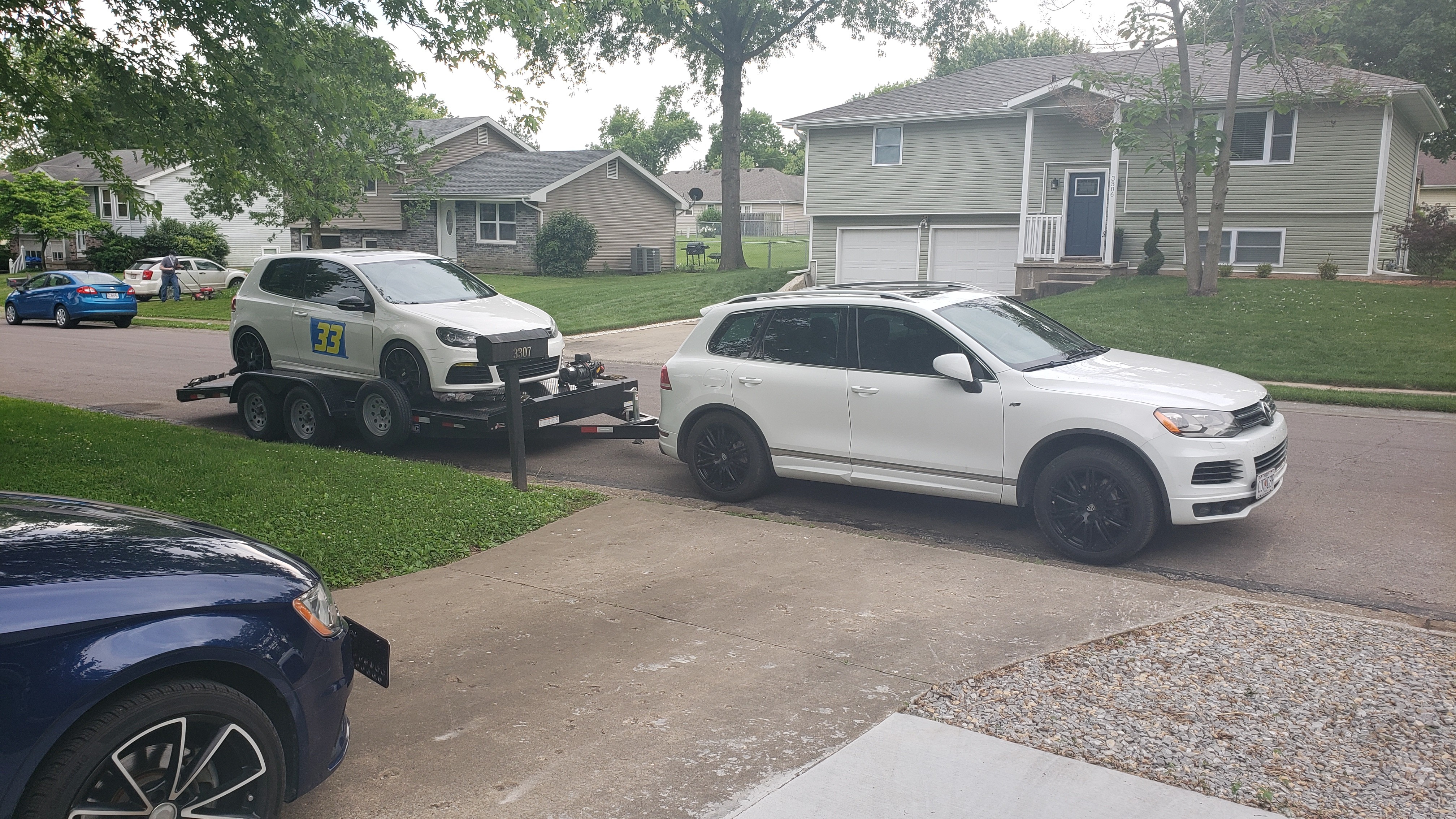 Due to Covid the event was forced to pull instructors from the HPDE 1 group drivers cars and they ran instruction with "lead/follow" having the instructors on the track in their own cars, this meant they pushed the group 2 cars into the 3 group where I currently am. There weren't many group 2s supposedly but we already had a ton of cars in 3, with the change that put almost 40 cars on the track at once. Hard to impossible to learn a new track and a new car while spending every minute giving point buys to one of the 14 or so Corvettes and Camaro's on racing slicks as they feel they need to bump draft me. Every other minute was working through normal traffic myself offline and then quickly back to letting off to get passed next. Insanity. Plus from the fact that the entire group other than myself and about 5 others ignored the full course black flags when the Audi crashed and some conversations at downloads about passing, my confidence in my fellow drivers being consistent and safe was non-existent.

Clearly the all season rubber was even worse than I anticipated, when I did get some clear track to search out the best line I found grip hard to come by. Then I started having brake shudder issues halfway through sessions, and finally for fun I found it was eating oil. Only about 1/4 quart but final straw, I just winched her back on the trailer and headed home making a mental list of all the work I needed to plan out.

Finally got around to installing the BFI weighted shift knob I bought like 4 months ago LOL To add a little form to my function I got a new shift boot from BFI in black alcantara with blue stitching (to match the gauge needles). Really happy with the result, the upgrade look is subtle but awesome.

As for the function, also very happy. The first drive and shifts feel so much better, the weighted knob works flawlessly with the weighted shift bracket in the APR kit. I was actually starting to notice after a few months the APR kit with the factory shift knob was causing a bit of difficult shifts. Nothing major of course, but it just didn't feel as crisp as I wanted as I used it more. With this knob though shifts feel seamless, part of me wants to go with a heavier knob.....but then I worry about adding more overall weight to the car.

The installs were fairly straightforward. The boot came with some sticky adhesive tape to attache the bottom of the boot to the inside of the trim ring. I had carefully removed the factory staples with plans to reuse them for a stronger install but the alcantara proved very robost and I couldn't push the staples through, tried a needle to start it but wasn't big enough. So they don't give you enough tape to cover the entire trim ring area which I did not realize (it was rolled up) until I was near the end. I managed to tear the remaining part off and space it around but not perfect. For anyone else I would recommend unrolling the tape, cutting it into 4 equal pieces and sticking them on the corners (or cut them into 8 pieces and really space them out).

The shift knob was easy as well, the knob came with a thin zip tie to attach the boot, the boot itself came with it's own zip tie and it was hefty and had a more aggressive locking tab so I used it. The screw zerts to secure the knob to the shaft do NOT tighten down securely. Many people have posted about this but the knob did not come with Loctite and I was out so figured I would test it. Sure enough, within 50 miles the knob was loose. So I'll be taking it apart to get Loctite on those screws this weekend. 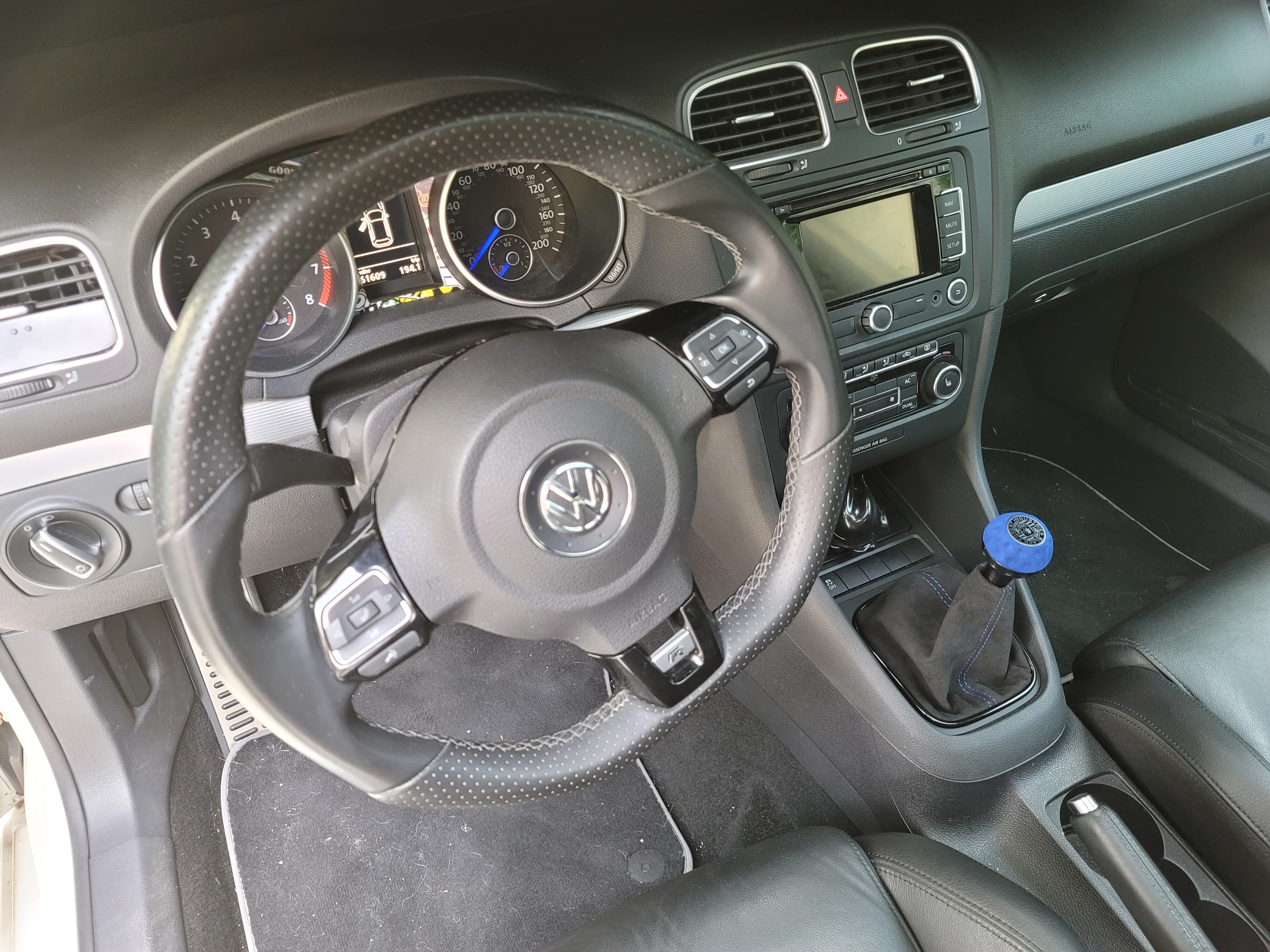 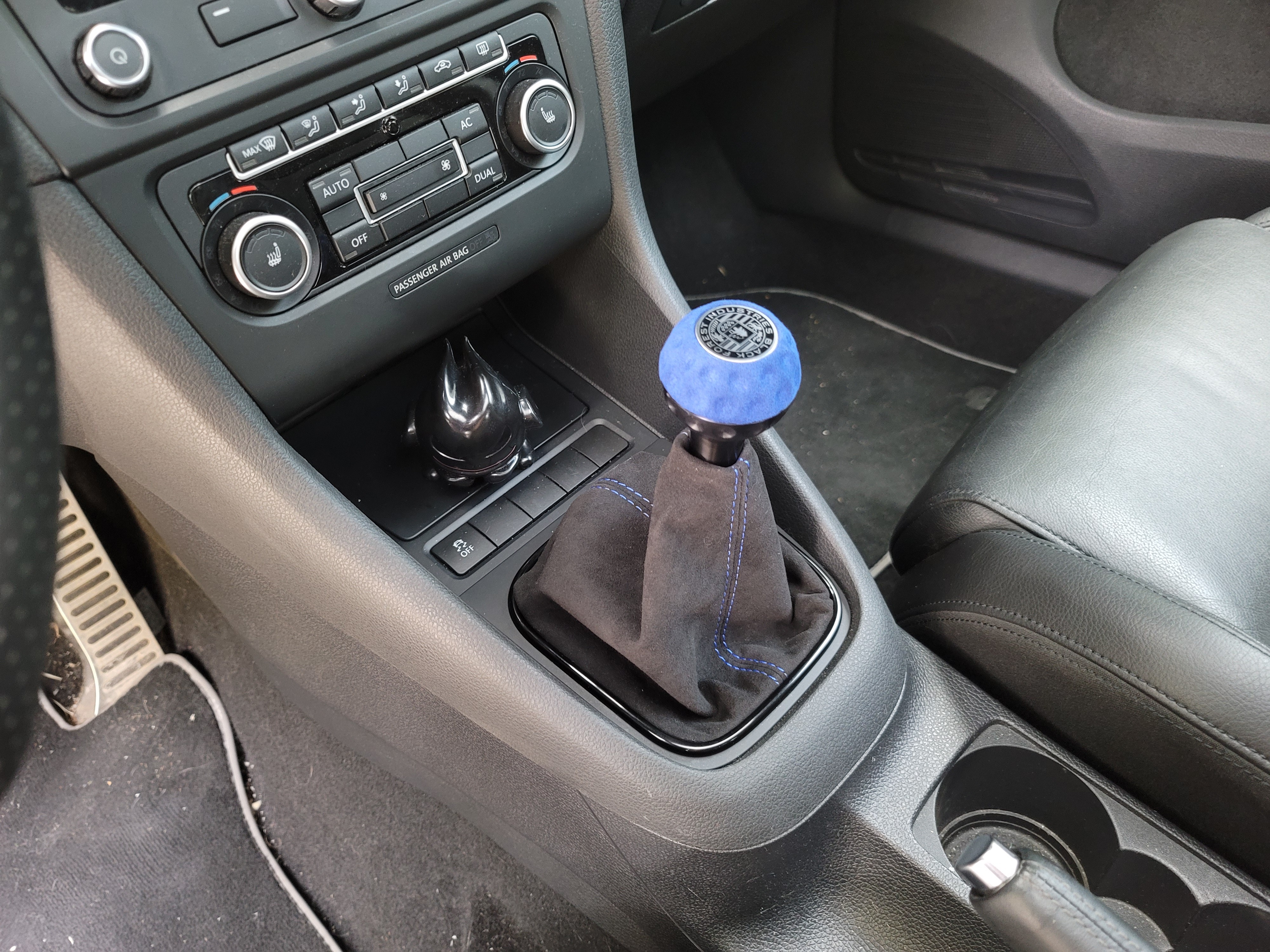 what turbo are you running?

Literally the first thing I did.

Francoleon91 said:
what turbo are you running?
Click to expand...

Thumper1 said:
Literally the first thing I did.


Sorry, updated OP. It's the APR Stg 3 kit, confirmed tune level with Aaron prior to purchase.
Click to expand...

so its a garrett gtx28 or the older version with a GT30?

Francoleon91 said:
so its a garrett gtx28 or the older version with a GT30?
Click to expand...

walker said:
That knob and boot look fantastic! Matches the blue gauges. That's one think I miss from my MK4, the blue/red dash.
Click to expand...

Yeah, problem is now I want to have the stitching on the parking brake redone with blue........LOL The steering wheel will eventually be replaced with one of the CF with blue centering stripe.


Also, I just noticed this week that I installed the BFI logo coin upside down.

Time for an oil change and draining the catch can. Decided to pull the cam follower as well. I thought the guy I bought it from said he had recently changed it when I bought it and it had 52k miles on it, but when I was looking back at the records it was changed at 36k and it's at 63k now.

It doesn't look indented but that does sort of look like the outline of the plunger on the outside? Guess I will pull it again after 10k and take a look. 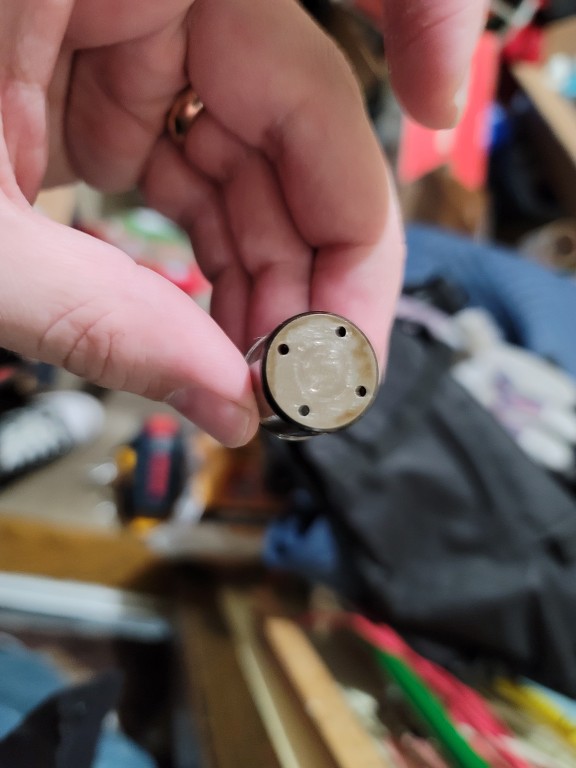 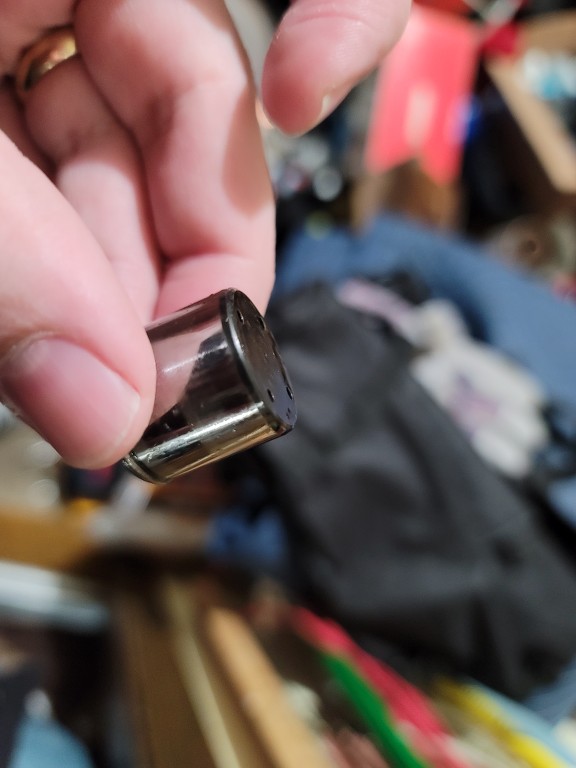 Even more frustrating I installed the TURBOSMART DV I ordered based on recommendations here. 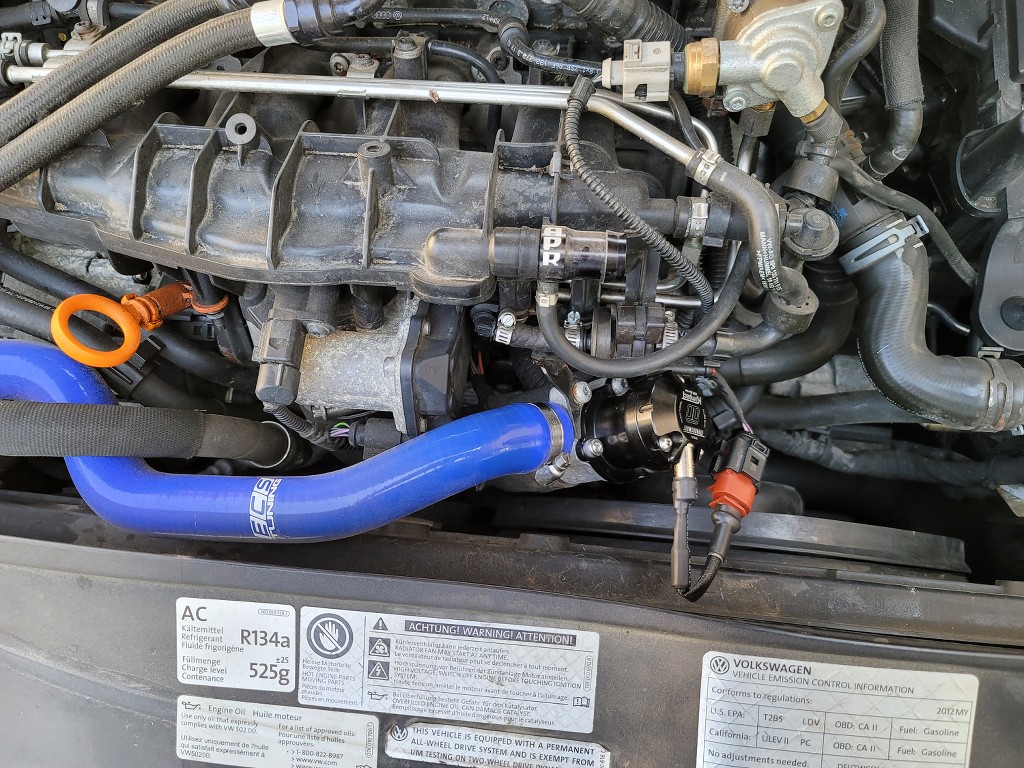 Install was straightforward for the most part, for orientation it just advises if the factory valve has a flat spot showing orientation to match it. There was no flat spot on my old valve but the TURBOSMART only really fit one way it felt like. After install now the car will not boost over 24-25psi, normal is 29-31psi. I took it off and noted the vent slots on the underside and they were not pointing toward the hose back to the intake. I had to play with the bracket and switch the bracket screw with one of the new socket heads from the valve for clearance and now the slots are orientated at the hose outlet.

The o-ring it came with was too small, wouldn't even fit in the groove, had to stretch it a bit to stay in the groove but it is tight and stays in when the valve is removed, but does seem thin when looking at the cross section in the groove. Still, if it was leaking I don't think it would hold boost up to 25psi and then leak holding 25psi. Car drives fine and feels great but it's just not as fast at top end when it would normally hit that higher boost, and it still holds the boost at 25psi, it just feels like the valve is opening too soon.

Also, did not solve the whistle/whine noise from the turbo between 0-10psi. Other than looking cool, the factory one was way better and was working flawlessly.