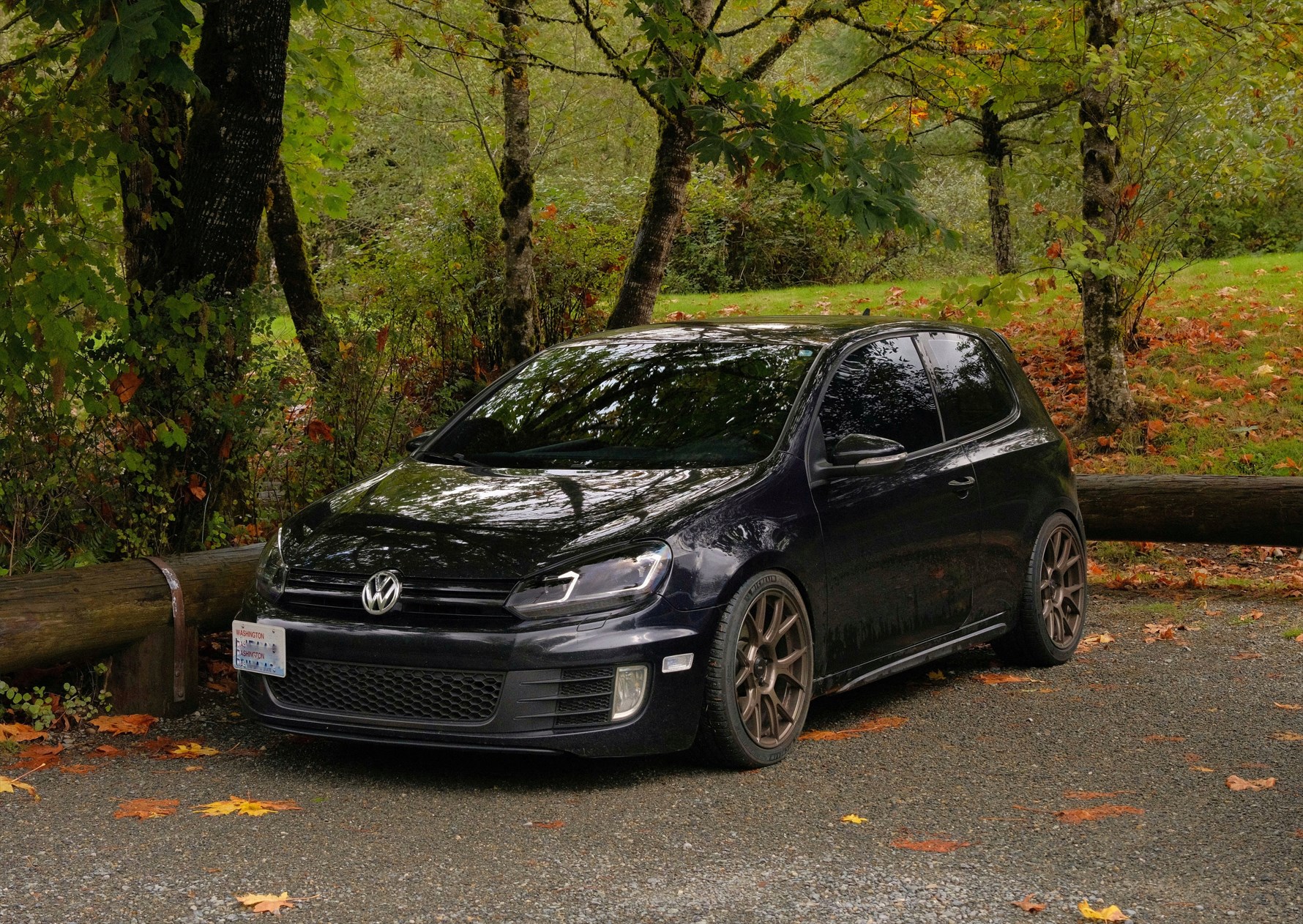 STORY TIME
I've been putting off posting a build thread for months!
I picked this up because I was tired of putting around in a slow, noisy rattling cage (1995 Toyota Celica), and felt I deserved something more comfortable.

I found a 2-door 6MT in town for a reasonable price. Somewhat high miles at 115k, but I'm confident in my mechanical abilities to save money on the maintenance front. It had a good amount of modifications done tastefully - most of which I would've wanted to do myself eventually - so that was a perk. It already had a set of Rotiform RSE wheels, FK Streetline coils, BSH motor mounts, GIAC Stage 1 tune, BSH CAI, GFB DV+, R8 coilpacks, ECS dogbone insert, ECS short shift kit, and a BFI GS2 shift knob. Body/paint were in solid shape, too. I bought it in mid-November of 2018. I don't have a ridiculous commute, so I haven't even put on 3k miles in about 6 months. Bonus, it's a desert car. So no rust anywhere!

Here's the first photo of her - the baseline. 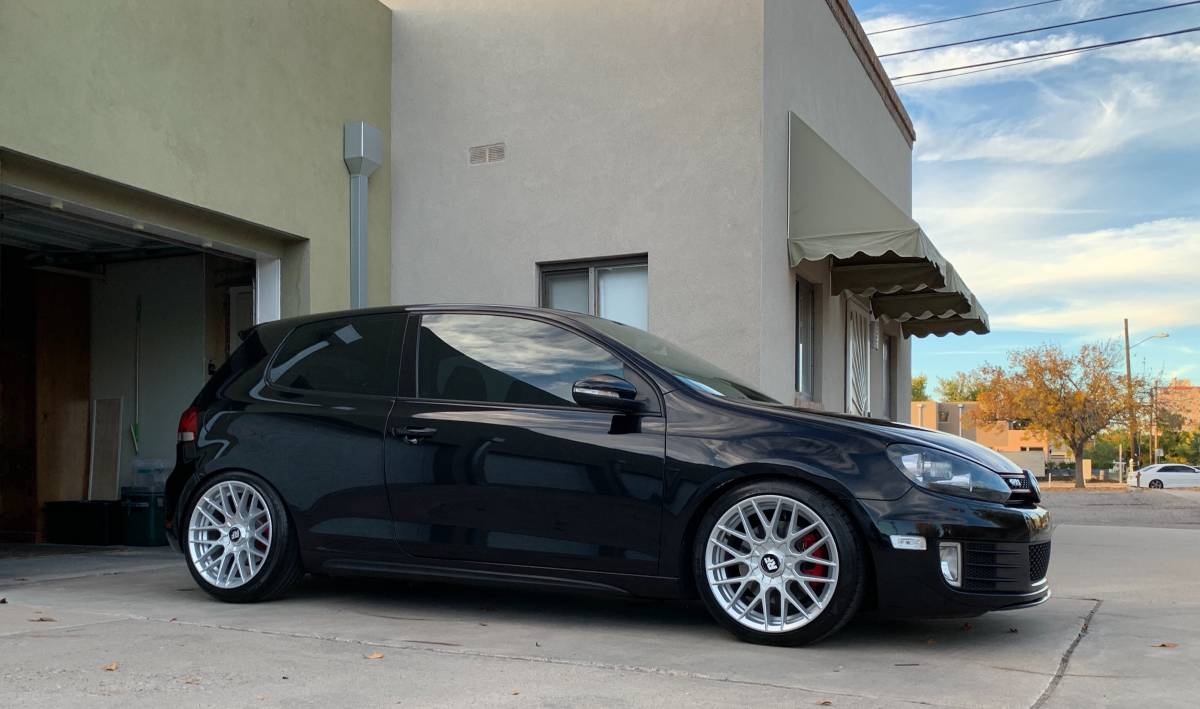 I have a habit of choosing culturally appropriate names for cars, so I went with Sabine for this one.

Since then, I've installed a Beluga Racing catback, an ECS catch can, Neuspeed charge/discharge pipes, an RCD330+, black caps for washer and coolant, and a Klii Motorwerkes rear badge inlay.
Also since then, I've discovered an H&R 24mm rear ARB and a set of 42DD shift cable bushings that the previous owner forgot to mention!

Future plans involve going Stage 2 within the year and smoothing out some rough edges, like installing a pair adjustable endlinks (previous owner left the OEM pair on, despite lowering the car) and chasing a few interior rattles. I essentially want to buy and install every aftermarket part, but for now I feel pretty comfortable with the set of performance parts I've got (until I buy a DP). A set of Euro tails is in my very near future, though.

Just a few from my photo gallery. I need to get in the habit of taking photos more frequently. 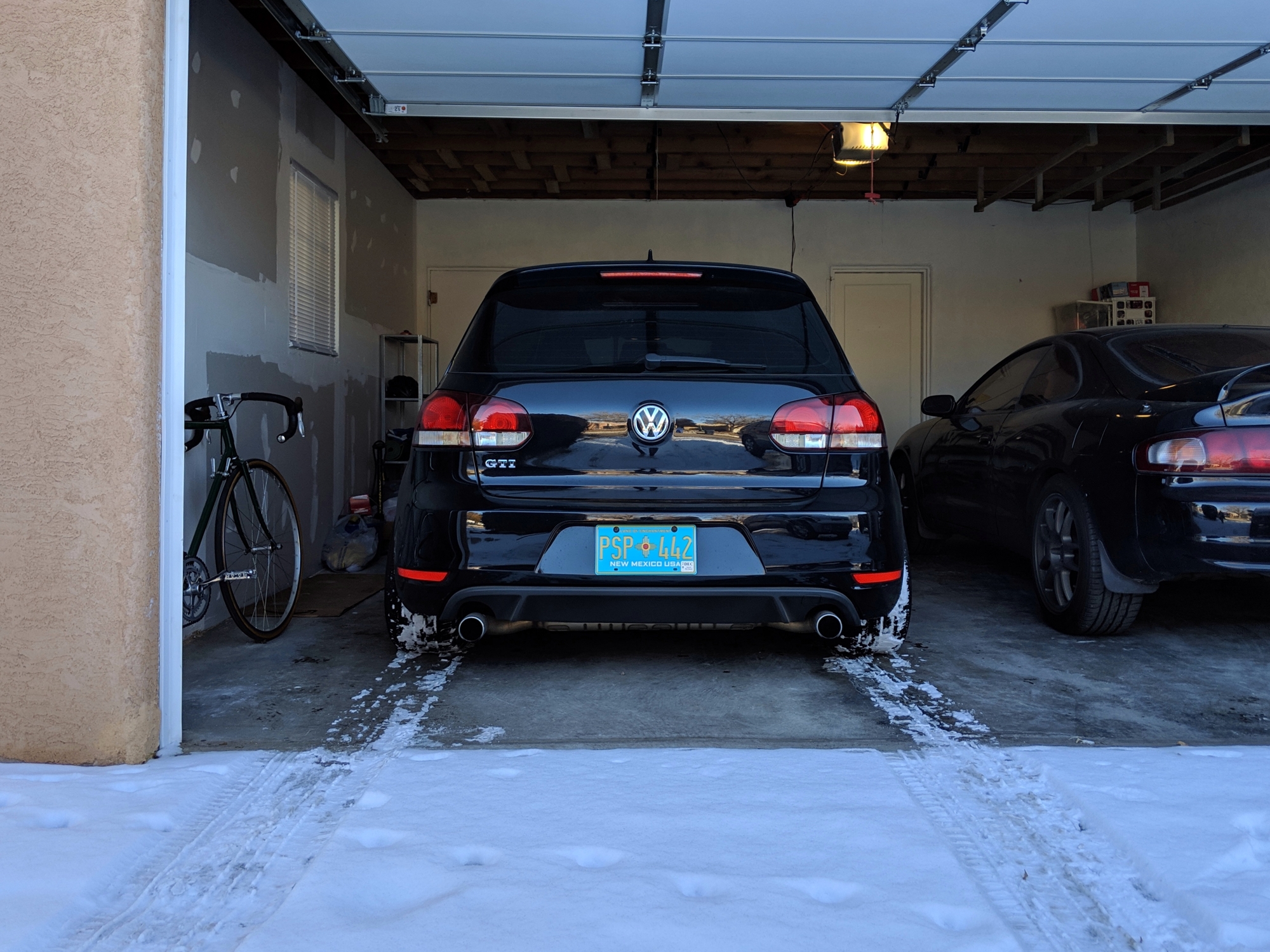 Exhaust comparison during the Beluga install. 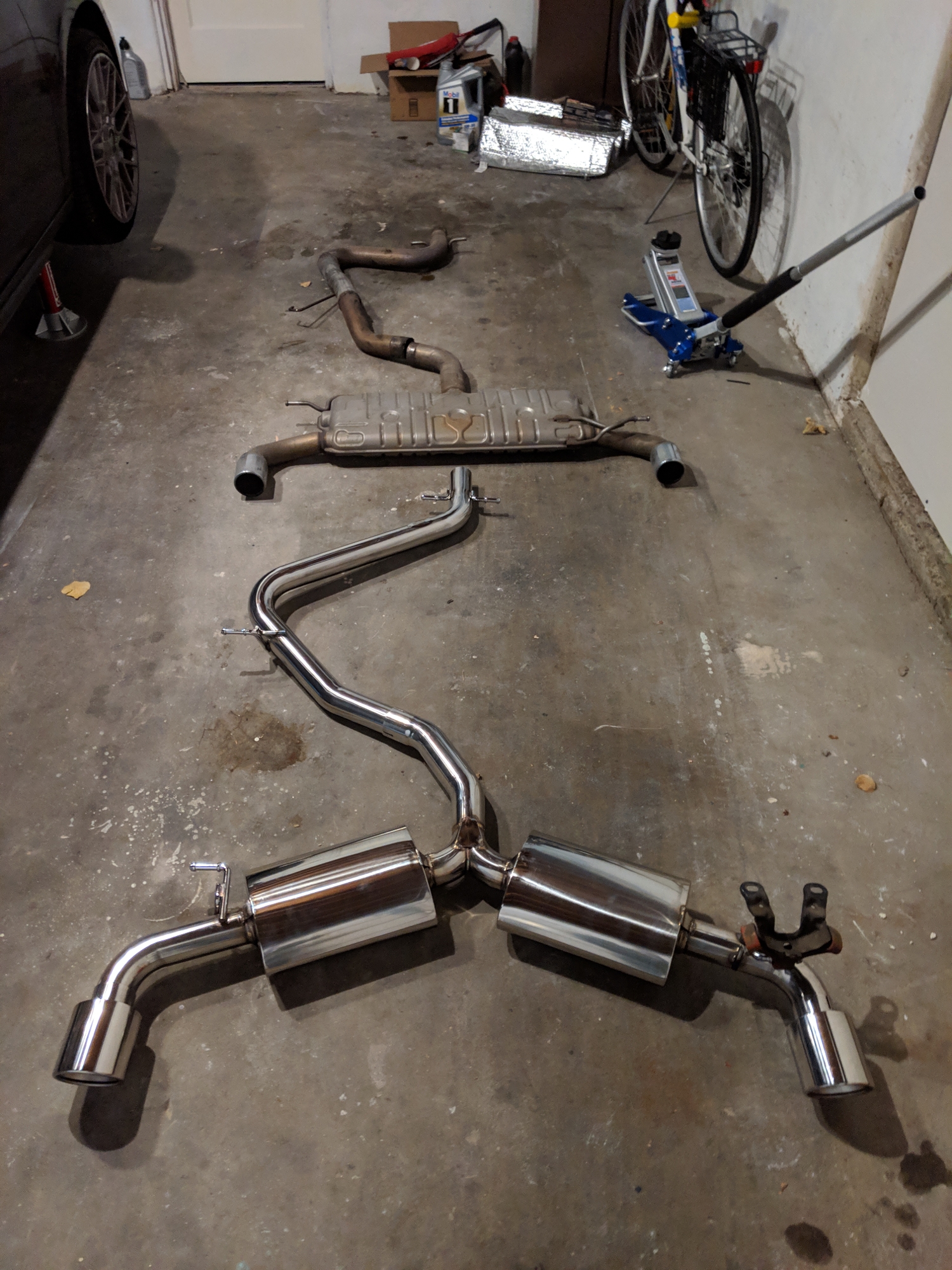 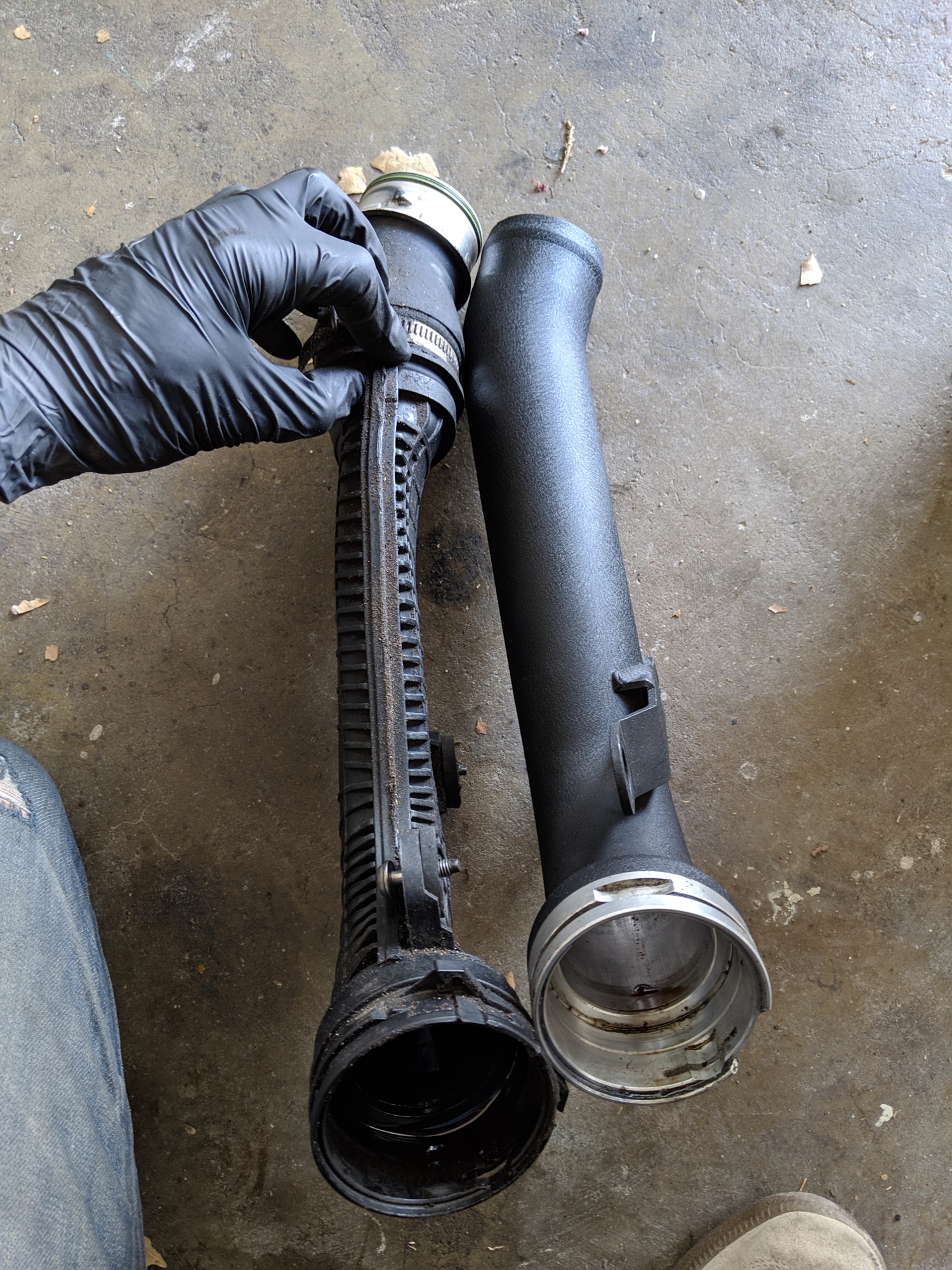 Fast and practical! Snare and cymbal bag were riding shotgun. 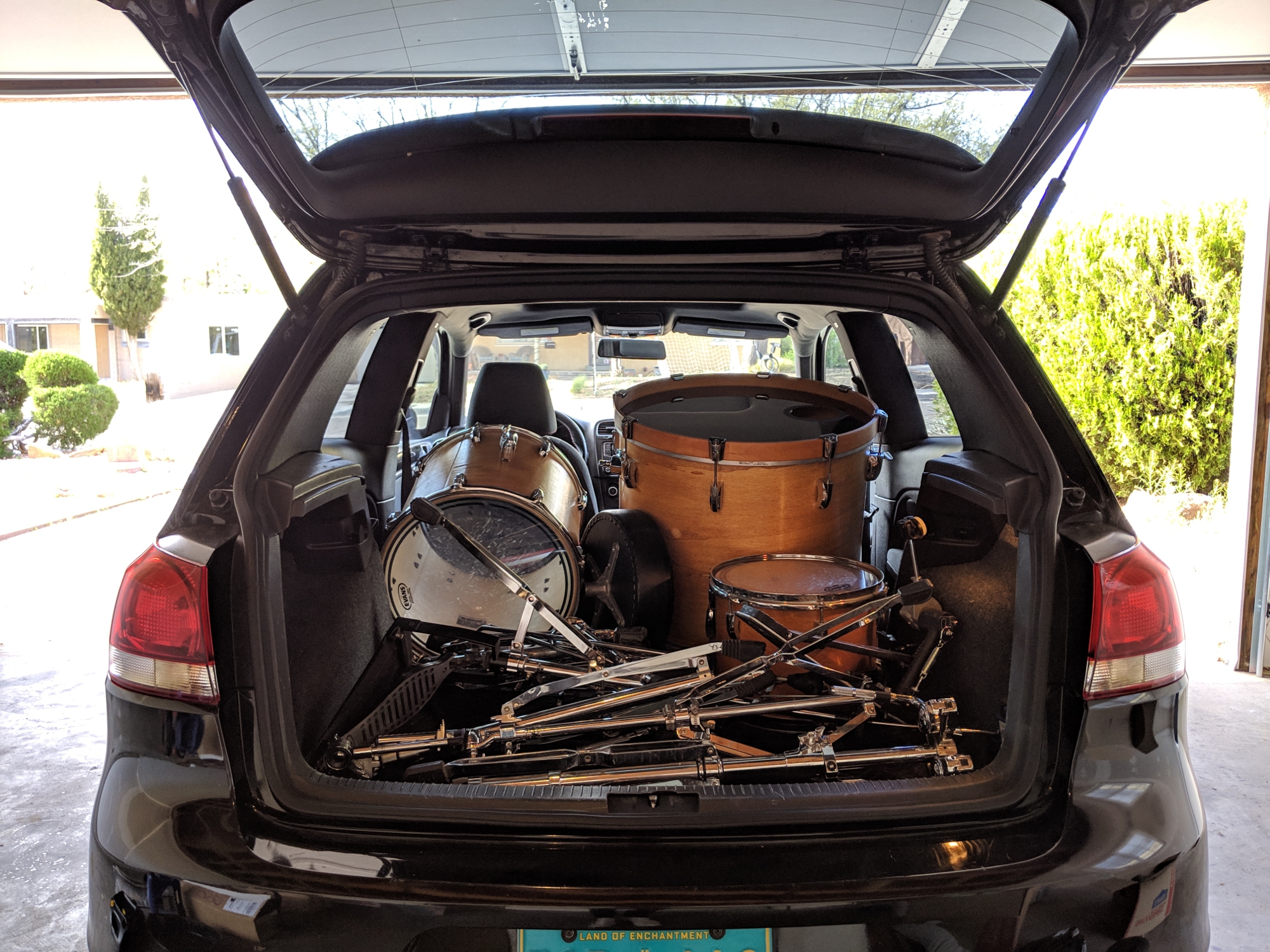 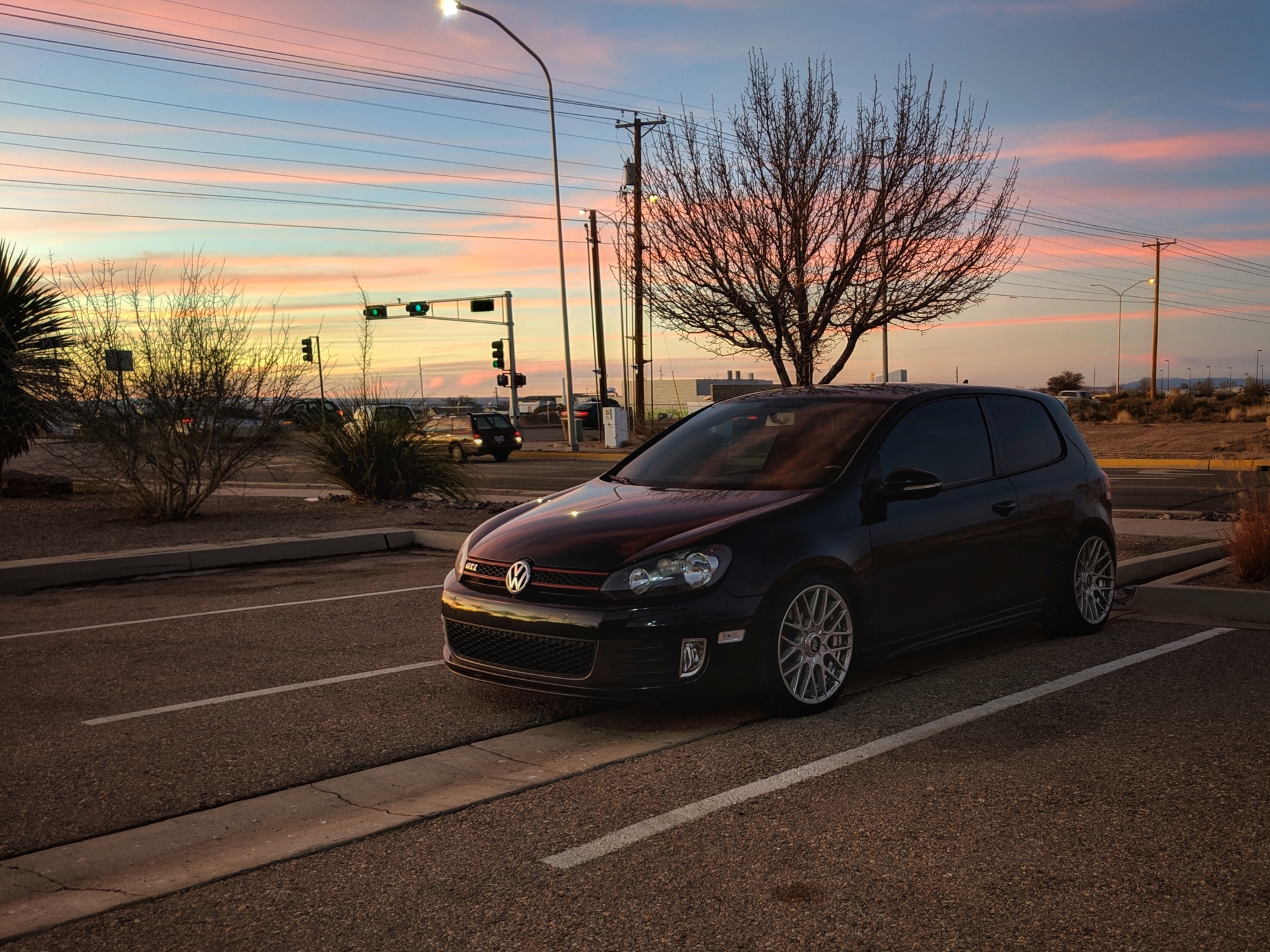 I really liked NewGuy's idea for this log, so I'll be making my own. Significant maintenance and wear/tear replacements will be in bold.

2019/03/29
- Bosch alternator replaced @ 117k (this one was annoying as hell - one bolt made this a much longer job that it had to be) (pro-tip, use a ratcheting box end for the lower-right alt bolt and reach it from underneath the car... space is TIGHT between the A/C compressor and rad fans, but it can be done)

2019/05/15
- Performed the "Voodoo Reset" and I'm fairly sure this fixed my clutch chatter (on 1st) and overall throttle jerkiness at low speeds.

New tune and WMI up next.

GolNat said:
Looking great so far and in for the progress!!
Click to expand...

Thank you, I'm looking forward to it!

Well, this morning my hatch latch randomly decided to die on me. So after work I stopped by the VW dealer and picked up a new unit. Took me all of 15 minutes or so to button it back up.

Then I opened up the old hatch latch to investigate and found the culprit; that little worm gear had sheared. 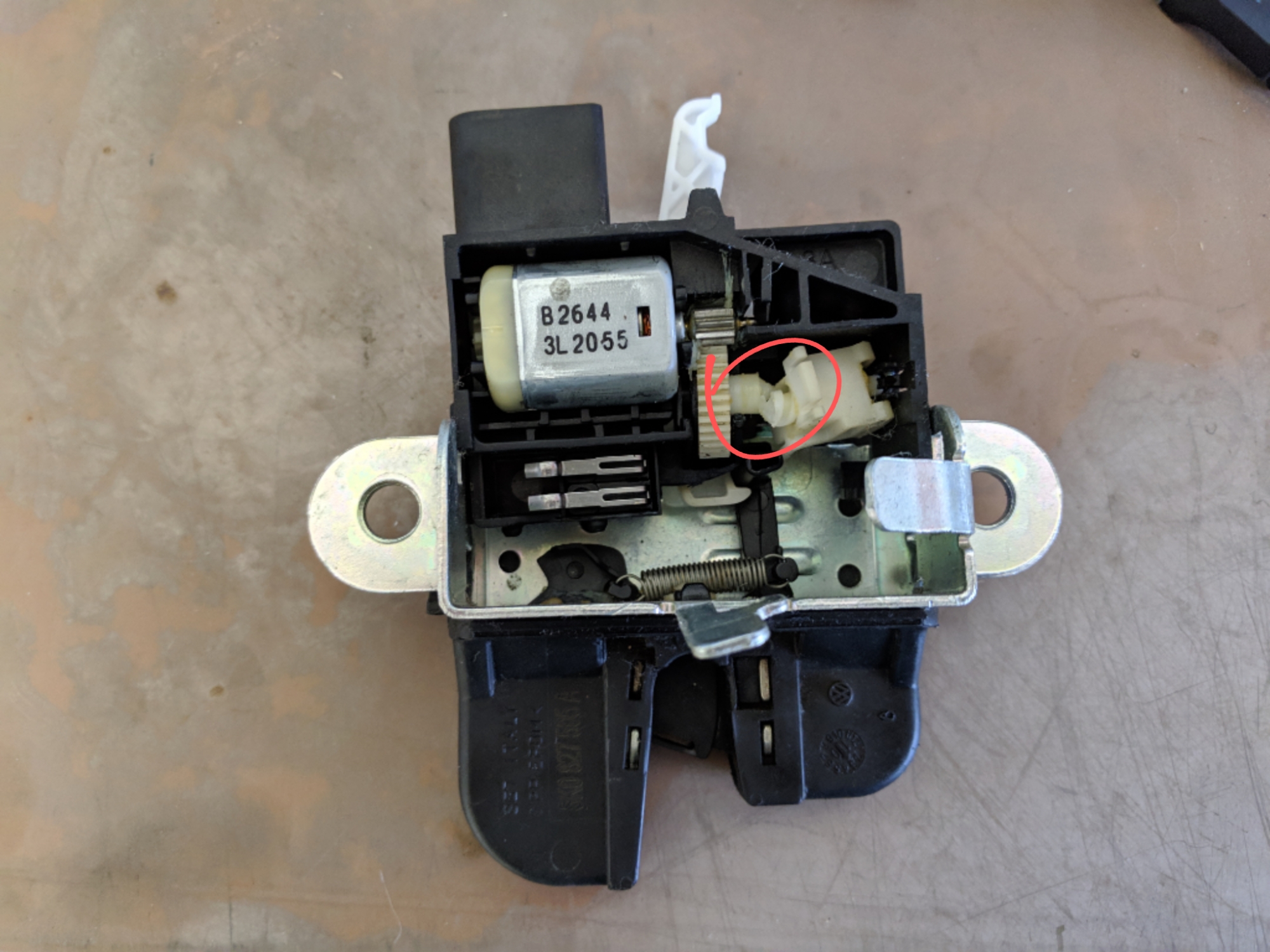 I finally have the garage looking tidy after a hasty move-in. 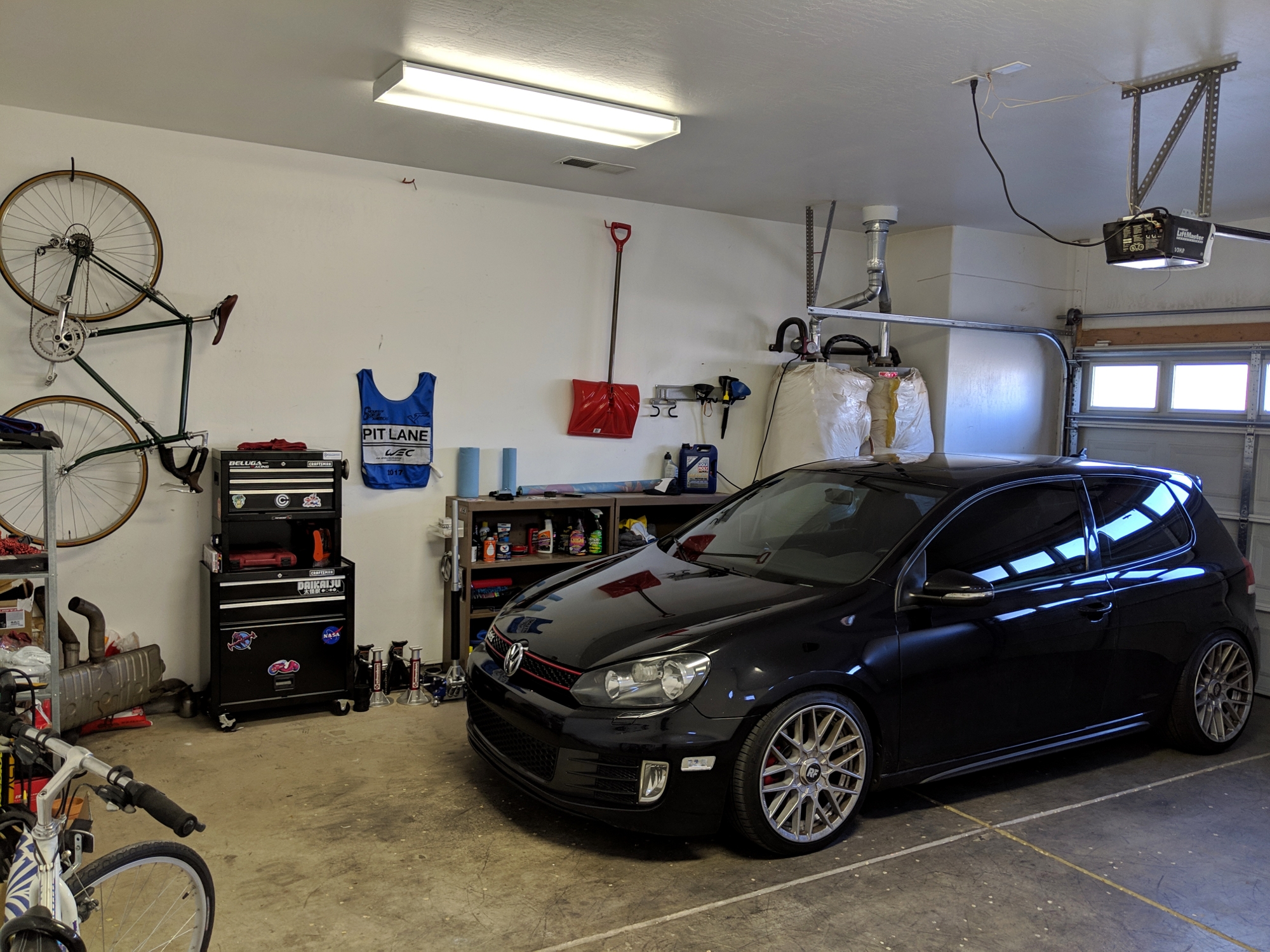 Looking Good.
How's that beluga catback working for ya?

That hatch failing is quite concerning.
Did it fail on you mid drive or during hatch opening/closing?
Current Setup: https://www.golfmk6.com/forums/showthread.php?t=118353

That hatch failing is quite concerning.
Did it fail on you mid drive or during hatch opening/closing?
Click to expand...

Thank you!
When I initially installed it, I was very underwhelmed since I came from de-resonated OEM exhaust. The sound difference was hardly noticeable and it felt like I spent all that money for new tips. But after a few months, I feel like the exhaust has opened up a bit more and the tone has deepened. It's a bit richer now. I'm excited to hear it change again once I install a DP.

As for the latch, luckily it failed one morning when I was about to go to work. Went out to the car and unlocked the hatch to toss something in. When I lifted the emblem, it made a crunching sound and just stayed open - wouldn't relatch. After opening up the old latch, I now know that the sound I heard was the latch motor's gear spinning freely and chattering on the gear for the worm gear section. Since the worm gear sheared, the motor was just free wheeling.
-- '11 GTI Build Thread --
Major Mods || Engine/Drivetrain: [GIAC Stg. 2] APR TBE, ARM FMIC, BFI mounts, Fluidampr, IE CAI, RSR clutch Suspension: KW V3, König Ampliform, Michelin PS4 A/S Exterior: ECS wing, Euro tails, Osram lights Interior: RCD330, Mk7 wheel, Polar FIS || full mod list
T

Installed an OEM Golf Low-Line grille tonight. I'm not sure why, but I prefer the understated look of the Low-Line vs the High-Line.

It's not in the best shape; just a few small scratches that I'm going to try to repair. But the emblem is in perfect condition and I scored the whole thing for $40. Plus, it's already 75% there after a quick round of rubbing compound followed by polish.

Ask and ye shall receive. Ona quick Harbor Freight run.
I planned on putting together the replica GTI grille as best as I can to black out the stripes and see how it looks. If I'm into it, I'll definitely drop you a line!

Just to give you an idea, here is my grille with the top black and bottom silver, similar to the Mk7 R.