I don't plan on dropping another $200 + my time to do dyno runs on the Uni stg 2. As my experience with Uni in the past, it was always lower numbers than my COBB, APR, or IE tunes. So it will be up to Doug to get you guys those numbers.
1

WalkerT said:
I don't plan on dropping another $200 + my time to do dyno runs on the Uni stg 2. As my experience with Uni in the past, it was always lower numbers than my COBB, APR, or IE tunes. So it will be up to Doug to get you guys those numbers.
Click to expand...

I already assumed Doug would be the one doing the testing with the Uni tune since you said you do not have your Unitronic account anymore.

1776dmc said:
I already assumed Doug would be the one doing the testing with the Uni tune since you said you do not have your Unitronic account anymore.
Click to expand...

Yeah I did get that resolved because I paid for the tunes and the uniconnect so they should continue to provide me the tune. Just for the principal of it you know.
J

There are alot of basic questions in this thread that can be answered if you check out this informative video:


He goes in depth about the waste gate arm, how it should feel when working right, how it has little to no spring tension when busted. Good vid
T

WalkerT said:
The arm, the rod from the arm to the gate, and the gate itself were all worn on my IHI. There was nothing I could do to fix it. Mine had the clip on it as well. The rattle was embarrassing.
Click to expand...

Our turbo's power output on Unitronic's Stage2 is a tougher question than with more aggressive mapping from other tuners. As covered before, the "trick" with this turbo is that it can deliver the requested power that a stock turbo cannot. And the way to identify that untapped potential is by looking at the data generated by that software. Here is what we see on Unitronic's Stage2 with a stock turbo. I will discuss them underneath the graphs. 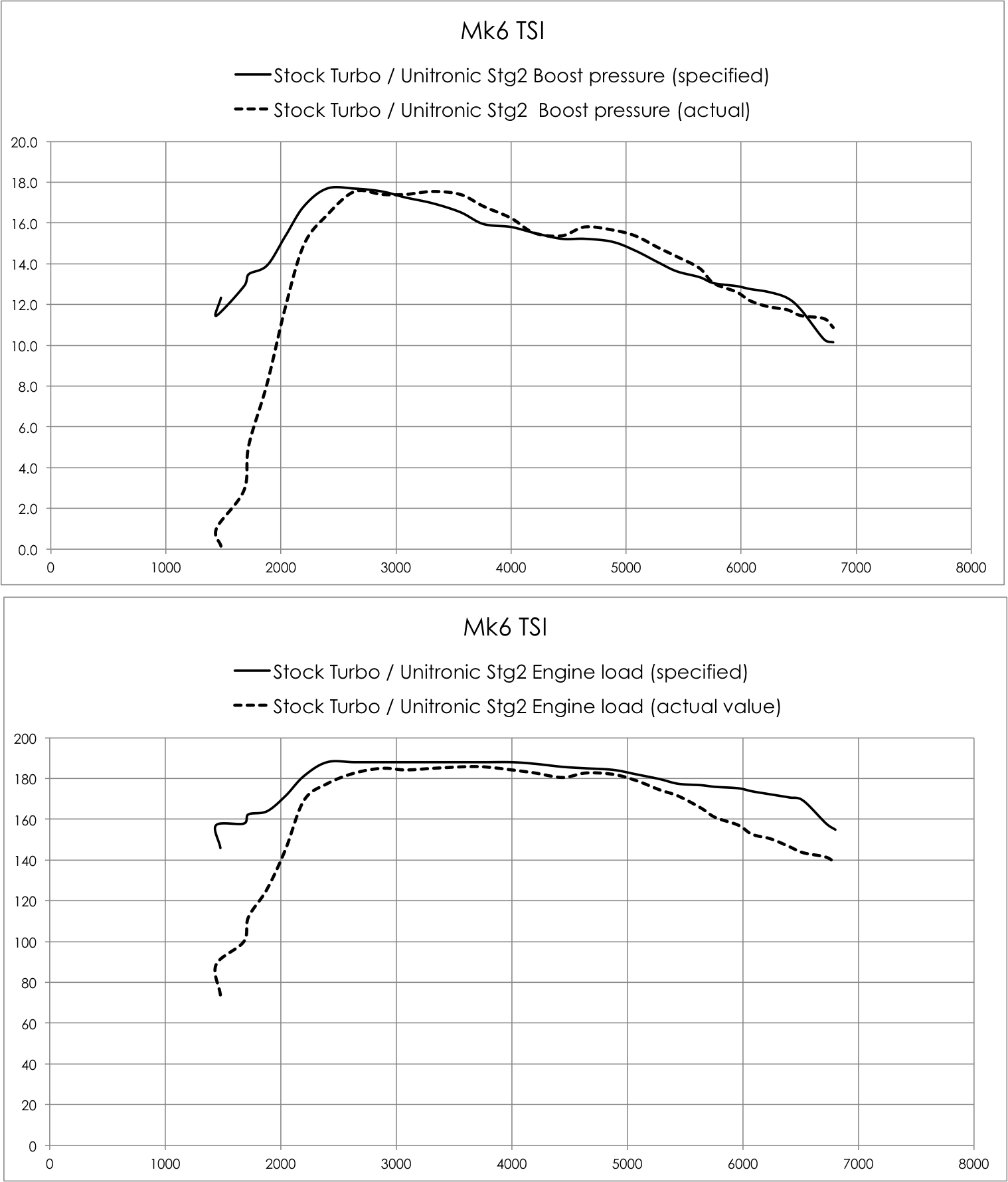 As you can see, the stock turbo can meet boost targets. But actual load is a different story. The software is asking for more engine load than the turbo can deliver. Why the discrepancy? My guess is Unitronic calibrated their map for conservative boost requests as a guard against engine codes. A failure to meet requests might be interpreted by the ECU as a mechanical fault, and trouble codes owing to that would be very frustrating for their customers.

So what would happen if our K03+ turbo were able to boost enough for requested loads to be met -- but with actual boost going above the requests? That's a good question. Load is the "top dog" value. It's the one the ECU uses to make all its calculations and to form all other requests. But Unitronic's software is the first one we've seen where engine load doesn't align with actual boost.

Our test car is currently fitted with another Shuenk product -- the K04+ -- so we're not in the position to test Unitronic's map with the K03+. That's why we're offering the big rebate for exactly that kind of data.
D

We've had a GTI owner step up to test this turbo on his Cobb Stage2 software. Before dropping his hard-earned cash into the project we went through his current setup's performance to see if there was power left on the table by his OEM turbo. Here's a look at his logs.

First, the software is commanding "maximum effort!" from the turbo. That's a good sign there's room for improvement.

That is really aggressive boost duty. Especially in the short phase as boost is first being commanded. So it's no surprise to see the actual boost is very strong in the bottom half of the rev range.

Boost is exceeding requests, but not by enough for the ECU to intervene drastically. However, it IS intervening somewhat. Look at the way the throttle angle is slightly modulating through that overboost section.

While the turbo is delivering all the boost (and more) in midrange, by 5000rpms, it's quickly collapsing. And this is the rev range where the K03+ shines. That should mean the airflow values in the upper ranges ought to come up significantly. Right now they are honestly terrible.

I believe this Cobb software should be able to accept an increase in airflows from the current (lame) 180g/s up to 225-230g/s. That's a good 50 added horsepower. Fitting the turbo will put my theory to the test.
G

Looks a lot like the K04 from the outside. I wonder what is different on the inside?

Just picked up a borescope and plan an doing some checks on the health of the turbo now that it has 500 miles on it and being stuck at home why not. I will report back on how it looks and if I can figure it out post some pics.
You must log in or register to reply here.
Share:
Facebook Twitter Reddit Pinterest Tumblr WhatsApp Email Link
Top